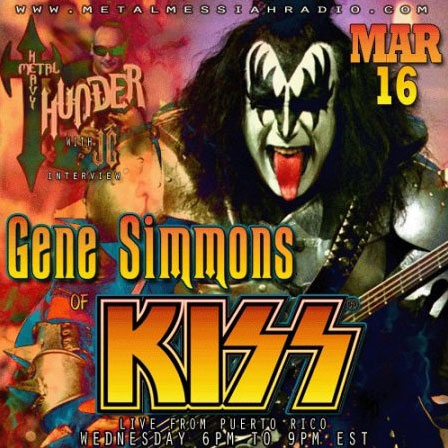 On ”Sonic Boom” and its planned follow-up:

”The best thing about ’Sonic Boom’ is that we did it honestly without worrying about it — not worrying what kind of music is popular now; we just did what we did, which was to be in KISS

”The new record, which we already started working on — we start recording in three weeks — is gonna be the next step to ’Sonic Boom’. Very similar — straight rock songs, no ballads, no keyboards, no nothing, just rock.

”We have brand new songs that we’ve been writing. We’ve been writing a lot. There’s a lot of very good material and that’s what we’re gonna record. A lot of the songs [have been] written by the whole band together, so no outside writers, just the band doing what it did on the first three records — writing the songs ourselves.

”We have almost all the songs written. In fact, we have too many songs; we have about 20 to 25 things that look and sound good. And we’re gonna get into the studio in about three weeks, and then we start recording. At the same time, I have to do the TV show [’Gene Simmons Family Jewels’]… I mean, it’s a very busy time, but the album is gonna take precedence, that’s the most important thing.”

On drummer Eric Singer and guitarist Tommy Thayer donning the ”Catman” and ”Spaceman” make-up, which many fans consider sacrilegious:

”Because it’s classic, and because the world doesn’t care who’s in the band. If you were a KISS a long time ago, then you know who Ace [Frehley] and Peter [Criss] are. But we play stadiums around the world who have never heard of Ace and Peter. When you go see THE [ROLLING] STONES, you see THE STONES. Nobody’s even heard of Brian Jones [except for] very old fans. And if you go see AC/DC or any kinds of bands that get up there, the original members is not even the point; it’s who you are right now. And you’re only gonna be as good as the team that [makes up the current] band. If you go see KISS in a stadium some place, most of the people have never heard of Ace or Peter; they don’t know who that is.”

On the possibility of a reunion with Peter Criss and Ace Frehley: