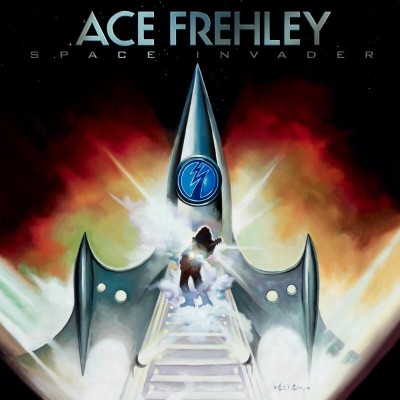 ”Space Invader”, the first new solo album from original KISS guitarist Ace Frehley in five years, will has had its North American release date pushed back to August 19 from the previously announced June 24 via Entertainment One Music (eOne Music). The CD, which will be made available in Europe on August 29 through SPV/Steamhammer, will include at least nine brand new original songs as well as a cover of Steve Miller’s ”The Joker”. This album is the first release under Frehley’s new universal deal on eOne Music.

Frehley has released the first single from ”Space Invader”. ”Gimme A Feelin'” is now available on iTunes. You can also stream the song below (courtesy of RollingStone.com).
Asked what the songwriting process was like for ”Space Invader”, Frehley told Guitar World magazine: ”You know, all my life I’ve never had a formula for writing songs. Sometimes it starts with a guitar riff, sometimes it’s a lyrical idea or just a melody. Sometimes I wake up with an idea. There’s no rhyme or reason. Sometimes I write on an acoustic, sometimes on a bass. There’s a song on the new album called ’Into The Vortex’. It’s a riff song, but I wrote it on a bass guitar. Why? Because I write differently with a bass guitar in my hand than an acoustic guitar or an electric guitar. When I feel creative, I just sit down and start playing.”