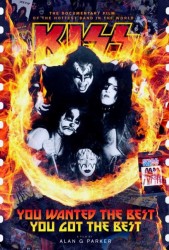 As of this week we now have the first rough assembly of the movie… it runs 2 hours 37 minutes (ironically the exact same length as my last movie!) and is still full of time coded archive, or footage from my vast bootleg collection… We will fix a date for Paul & Gene to view it in LA… Thus far the film as only been viewed by a small handful of friends from within the industry, other Producers/Directors etc… But they all love it… And are saying it’s my best work to date… We have un-earthed some great archive, and found a few masters, where masters were thought to no longer exist! One of my favourites being the 1976 first UK trip, Granada TV had the original broadcast master, which looks incredible… I’m very proud of the movie….

If Paul & Gene both like it, we will replace archive with masters, get some of pictures from the KISS office and put the film up for picture grading and final Dolby sound mix… Under my guidance….

We would look to release to cinema in September/October 2014…