The Gene Simmons meet and greet 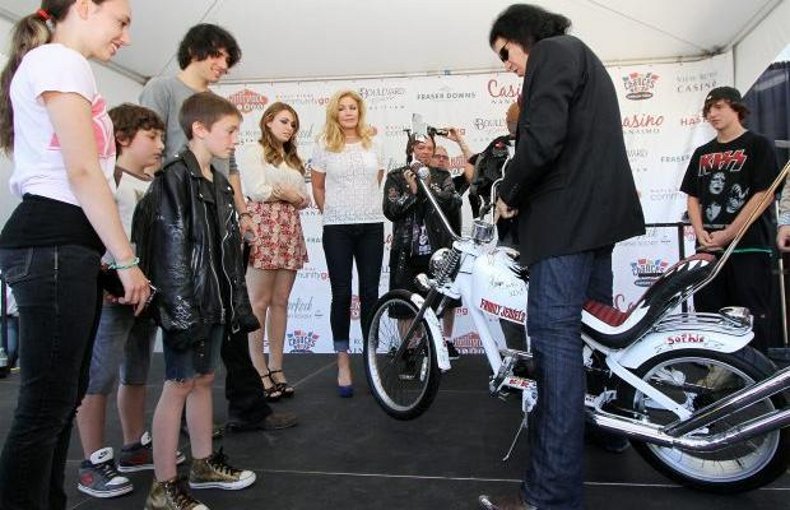 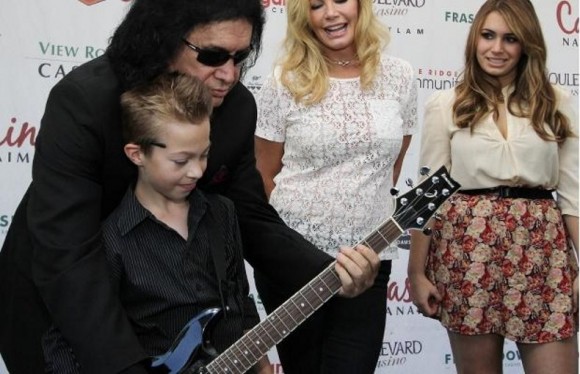 After four decades of screaming fans at concerts and autograph signings, Gene Simmons just says ”it’s this or staying home, twiddling my thumbs and watching I Love Lucy re-runs, which one would you pick?”

The KISS bassist and star of Gene Simmons Family Jewels was accompanied by his wife Shannon Tweed, daughter Sophie and son Nick, for a meet and greet outside the View Royal Casino on Saturday.

”You know we aren’t doing anything, we are just going to stand here and talk. We’re not performing, you know that right,” Nick told the crowd of screaming fans. ”Then hi, nice to see you. Why are you here?”

The event was a family affair, with many parents accompanied by their children, who are fans of the show.

Landon Shaw was just there to have his photo taken with the Simmons family and his own, but used his 15 seconds on stage to also play a few chords for the rock star.

Simmons stole the moment, however, when he reached around the 11-year-old’s shoulders to play a few chords on the boy’s electric guitar. ”It is a milestone he will remember forever,” said his mother Tiina.

Landon plays one KISS song, I Was Made for Lovin’ You, as part of a busking set he does downtown. His parents are fans of the band, and ”now we pass on the tradition,” said his father, Ken Shaw. They also share a love for the reality television show starring the famous family.

”It’s the life of the rock star family-style. They are so down to earth, though,” said Ken. ”They go through the same trials and tribulations as we do, only they have got a lot more money.”

The money and fame is one side of the story, but the family portrayed through six seasons is just like many others. Sophie said her father is extremely strict. ”There’s zero tolerance for drinking or partying or things like that. They encourage us to go out with our friends, but they encourage us to not be idiots.”

”I think the TV show is good for all of us. It is certainly good for me, because it gives me a chance to watch myself and realize that my perception of myself isn’t accurate. Sometimes I can be short, arrogant, selfish,” said Simmons.

As for the marriage rumours: ”For the record, I have never been married. I have desperately loved Shannon for 28 years, and we have two great kids,” said Simmons. 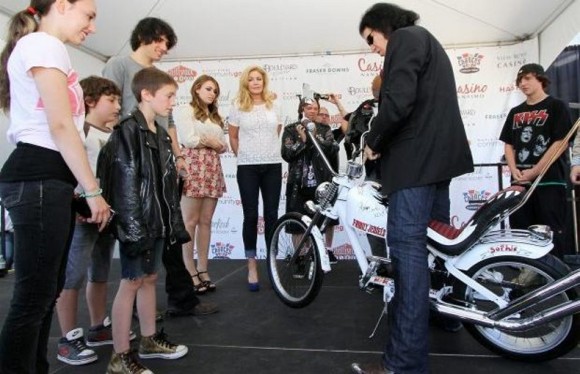 It was the kids that stole the show at the Gene Simmons meet and greet Saturday.

Thousands of fans left with a photograph of them with the famous family, but the Simmons’ clan walked away with a photo album of their own, documenting the six-week process of building a Chopper bicycle in their honour.

Sophia Harrington, 12, built the Jewel bike with the help of three other youth as part of the Angels Chopper Bicycle Club. The club gives youth an opportunity to keep busy, rather than taking to the streets.

”We are fans of the show,” Sophia said. But they also love bikes, including building them from scratch. ”We make them and paint them,” she said.

Tony Harrington, 9, Gavin O’Driscoll, 11, and Thomas Haywood, 16, helped build the bike and design it in tribute to KISS and the family.

The bike seat is shaped as Simmons’ famously-long tongue and has a guitar-shaped back-support.

”Go ahead dad, sit on your own tongue,” said Nick.

The white bike also has the names of Gene, Shannon, Sophie and Nick – and now their signatures, which the family added.

The youth group offered to ship the bike to the Simmons’ clan, but Shannon Tweed had another suggestion.

There were many children on site to see the stars of the Gene Simmons Family Jewels reality television show, and Simmons had some advice for youth looking to pursue their dreams.

”Whatever it is that you want to become, sometimes where you are from doesn’t have it all,” he said. ”Be proud of who you are, but the mountain is never going to come to you.”

The ACBC group has built bikes as tribute to several famous groups, including the Ozzy bike and the Elton bike. They have also built a Canucks-themed bike.