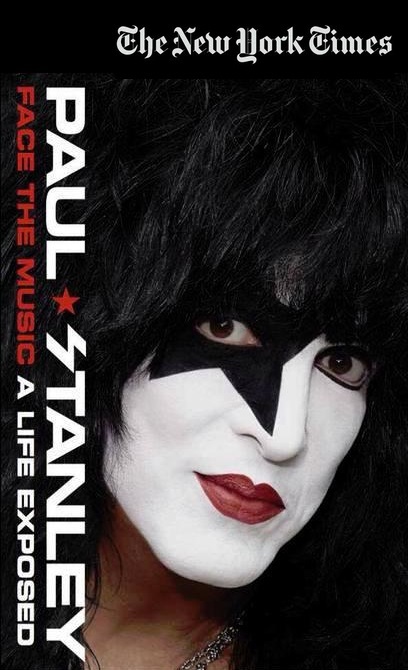 So, nearly a month after it was released I FINALLY had the chance to sit and finish Face the Music: A Life Exposed, the autobiography from the one and only Paul Stanley, my hero, my idol, my inspiration, my GOD. I’m not usually big on these because, quite frankly, most rockers’ bios tend to be very similar: Have it all, lose it all, get some type of spiritual awakening, mount a comeback, stir, repeat, stir, repeat. And while no one loves a good comeback more than me, I would more often than not find myself screaming, “If you’d just made better decisions in the first place you never would have fucked yourself!!” as I read. So I kind of stayed away from them for a while. Plus, running my own site, working, and having a ball of energy like Mini-Amps around doesn’t exactly offer many opportunities to sit and read.

Obviously in this case, there was a HUGE exception to be made. You all know how much I live, breathe, and eat KISS above all the other bands in the world combined. You also know the deep admiration and utmost respect I have for Paul due to the way he has always conducted himself with class and never done anything to tarnish the legacy of the band. Even when members of AEROSMITH fired some shots across the bow in 2012, Paul, ever the gentleman, took the high road. And we all saw those bozos from Boston release an album that would sink like a stone in a bit of Rock & Roll Karmic Justice, much to my delight. But I digress.

If you’re looking for a salacious tale full of exquisite details of groupie-shagging and hard partying, you’re in the wrong place. This is simply a man who spent much of his life feeling isolated and alone despite being adored by millions. Born with a deformed ear and parents who did little to nothing to help him in the self-esteem department, he spent much of his life trying to please others often at the expense of his own happiness. The book goes into great detail about the rise and subsequent fall of KISS in the seventies due to a combination of Ace Frehley and Peter Criss’ drinking/drugging, and his and Gene Simmons’ hubris, thinking they could do no wrong in the public eye as they turned a once-dangerous rock band into a goddamn cartoon. Paul is never afraid to shine the beacon of blame on himself, whether it is about his own actions or his failure to stop others from themselves. Either way, there are a lot of eye-opening revelations.

Even more moving for me was when he described the failure of his marriage to first wife Pamela. Watching your hero fall to pieces on paper is not fun, and even though it was a long time ago I still felt for the man. I also loved hearing him speak with unwavering love and pride about his four children and the happiness he found with second wife Erin. All of these events are chronicled in such a way that you really feel like you’re right there, whether that’s onstage as he sings “Love Gun”, or nearly drowning in the Pacific while vacationing in Hawaii in the early days of KISS. And hearing him be brutally honest when it comes to his partner and brother of 40 years Gene Simmons is refreshing.

I could go on and on and on, but why? If you really want to see what life has been like for Paul Stanley pick up Face the Music. I guarantee once you start, you won’t want to stop. This is an inspiring story of a man whose drive and undeniable talents propelled him to the top of the music world not once, but TWICE. And even though the day will inevitably come when he decides to hang up the star for good, I for one pray that day never does. A brilliant read! ~The Maestro