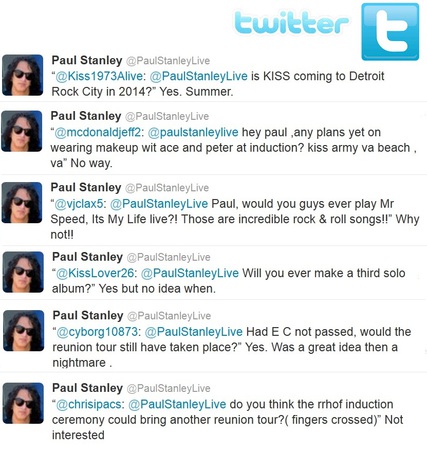 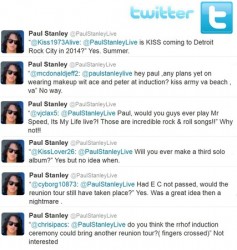 Paul Stanley skriver mycket just nu på sin Twitter-sida och här är en hel del intressanta saker från den senaste tiden:
PAUL STANLEY ON TWITTER: REUNION FOR HALL OF FAME UNLIKELY !!! Paul recently made some Tweets recently saying that it is unlikely, that the original 4 are go…ing to be playing together at the Rock Hall induction. There is ”no way” that Paul will be going on stage with Ace and Peter in make-up together, and no chance even for a couple of shows together afterwards… He also mentions that Kiss might play the UK this year again and that he will be back in Italy – and that Kiss will play Detroit again in the summer. He also said if Eric Carr was still alive, the Reunion tour still would have happened. Paul will also be doing book signings for his new autobiography.