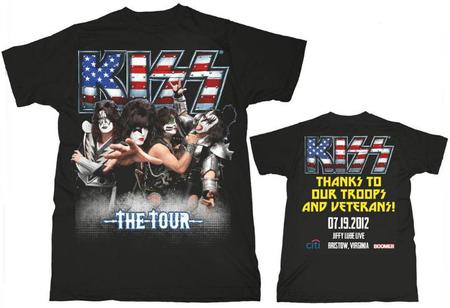 KISS PAYS TRIBUTE TO U.S. MILITARY WITH A PRIVATE CONCERT FOR TROOPS AND VETERANS AT JIFFY LUBE LIVE IN BRISTOW, VIRGINIA ON JULY 19
On the eve of KISS’ massive national tour with Mötley Crüe, the legendary iconic rock band honors the U.S. military with an intimate concert at Jiffy Lube Live in Bristow, Virginia. On July 19, KISS, longtime supporters of the military, will put on their infamous rock show for over 2,000 service men and women. Presenting sponsor Boomer Magazine, Virginia’s source of entertainment for baby boomers, coordinated the free ticket distribution through the U.S. Chamber of Commerce and various military agencies. Troops and Veterans attending will receive a special commemorative KISS t-shirt.
KISS also teamed up with Hiring Our Heroes, a campaign by the U.S. Chamber of Commerce and supported by NBC News that aims to get veterans back into the workforce. KISS has hired a military veteran to be a roadie for their upcoming national tour. KISS co-founder Gene Simmons said that hiring veterans ”is the most important thing that we can do.” The band held an open call and after receiving over 1,900 applications for the job, Paul Jordan, an army serviceman from Buford, Georgia was chosen. Jordan, who has devoted over 20 years to the military serving three voluntary tours of duty in Iraq and Afghanistan, is a life-long KISS fan and member of the KISS army who sports a tattoo of Gene Simmons on his chest. Jordan reports for his new job as roadie, with his first full show on July 19.
Following KISS’s lead, Boomer Magazine held an online contest to support Hiring Our Heroes and hired a veteran to conduct an interview with KISS.  Robert Crespo, an Army serviceman, was chosen.  Crespo served in Iraq’s combat zone and listened to KISS ALIVE Symphony often while in the desert.  ”KISS was the motivation to keep going,” Crespo explains.  Crespo’s interview with his idols, KISS, will be featured in the August issue of Boomer Magazine and video footage will be available at www.FaceBook.com/BoomerMag.
On October 16, KISS will release their 20th studio album, Monster, through the Universal Music Enterprises. The 12-track, CD is a celebration of the band’s signature sound featuring collaborations among all four members—including co-founders Paul Stanley and Gene Simmons and longtime members, guitarist Tommy Thayer and drummer Eric Singer. On Monster, the group goes back to their own beginnings.  Their first single, the full-throttle, autobiographical rocker “Hell or Hallelujah,” was recently made available digitally and debuted #1 on the iTunes Rock Song chart.
During KISS’ illustrious, 40-plus year history the band has earned 28 U.S. gold albums, the most gold records for any American rock band, 40 million sales in the U.S., and a total exceeding 100 million worldwide.