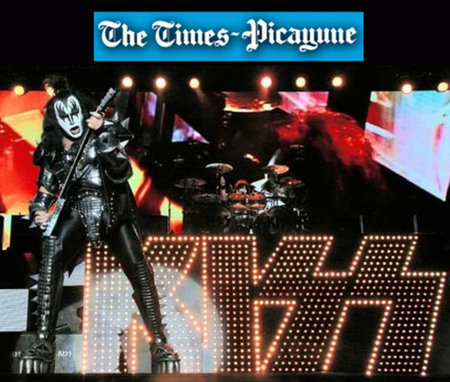 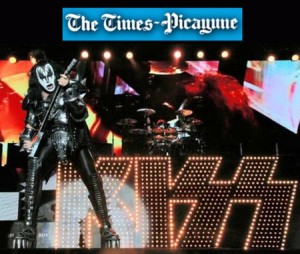 By Keith Spera/Photo by Danny Bourque

”Rarely are the members of KISS accused of being great musicians or songwriters. KISS built its legend with different tools, specifically showmanship, savvy and good songs. Closing out the big Voodoo Stage on Saturday night – could Voodoo Fest have booked a more appropriate Halloween Night headliner than the original Monsters of Rock? – the current members of KISS played well.

In guitarist Tommy Thayer and drummer Eric Singer, co-founders Gene Simmons and Paul Stanley have found sidemen who not only wear the make-up well, but are arguably more proficient technically than the guys they replaced.

More importantly, KISS looked fabulous. The silver and black costumes sparkled. Stanley can still prance and preen like his rock ’n roll prima donna character demands, and his voice is in good shape. Simmons, despite revealing his very human flaws – and his facelift – on a reality show, still hams it up as the demon God of Thunder. Flames and fireworks erupted, sparks — the literal kind — flew. Saints tight end Jeremy Shockey, right down front, pumped his fists skyward during ”Shock Me.”

Our heroes trotted out the same tricks they’ve deployed for decades. But quite frankly, I’d be disappointed by a KISS show in which Simmons didn’t spew fake blood down his chin, cross his arms like a petulant child, wag his tongue ridiculously, ”fly” to a platform in the lighting rig or beat on his battle axe bass during his solo.

The band played ”Rock and Roll All Nite,” one of KISS’s truly great anthems. From there on in, it was a hit parade: ”Shout It Out Loud,” with its sweet twin-guitar opening riff; the latter-day classic ”Lick It Up”; ”Love Gun,” during which Stanley rode a zip line over the crowd to a platform at the sound booth; and a final, can’t-miss ”Detroit Rock City.”

Cue massive fireworks display, which was audible at least as far as the intersection of Claiborne and Broadway.

You wanted the best, the hottest band in the world. On a cool, damp Halloween night at Voodoo Fest, you got KISS.
Nov 01 2009
VOODOO FEST FANS ROCK WITH
KISSONLINE
Take a look at the thousands of fans attending last night’s KISS”