Chris Connelly tells the story of when KISS went to Cadillac, Michigan

It was 1974 — the straight-laced football heyday of Woody Hayes and Bo Schembechler — and in northern Michigan, you could hear a pin drop in the way-too-tight Cadillac High School football locker room before games.

That’s when an enterprising assistant coach named Jim Neff had a brainstorm. Why not rev up the Cadillac defense by playing a little pregame rock and roll? Like, for example, KISS?

When the bold plan led to a big winning streak — and a conference title — Jim Neff and the band he loved hatched a daring plan … to make Homecoming the following year an event the town of Cadillac would never forget.

Nearly 35 years later, no one has. 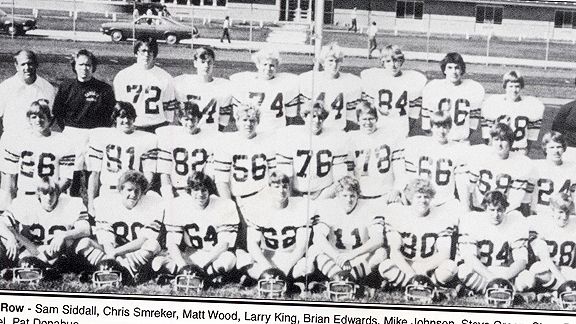 In the fall of 1975, the Vikings of Cadillac High School in Cadillac, Mich., were coming off an undefeated season and a third-place finish in the state of Michigan. With aspirations of having another great season, the team stumbled out of the gate with an 0-2 start. Head coach Dave Brines believed his team needed a jolt. ”I’ve always felt that emotion, desire, and those things are more important than athletic ability. It’s what a kid thinks in his mind and we always taught if you think you can do it, then you can.” (Photo from Cadillac Yearbook, courtesy of Jim Neff) 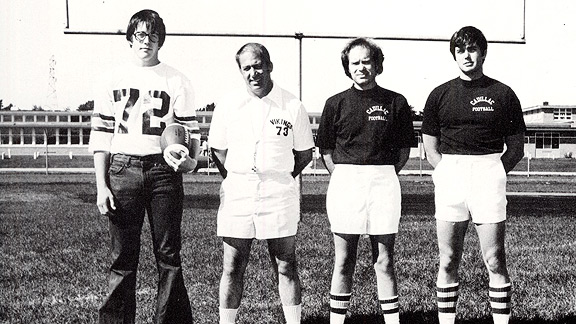 Brines and assistant coach Jim Neff had a revolutionary idea about motivating the team. Neff recalled the conversation: ”Brines said, ’We need to loosen these people up,’ which was a startling statement to me because as an old Marine he was pretty straightforward and straight-laced. And I said, ’Well let’s play some rock & roll in the locker room, and that will loosen the kids up.” (Photo from Cadillac Yearbook, courtesty of Jim Neff) 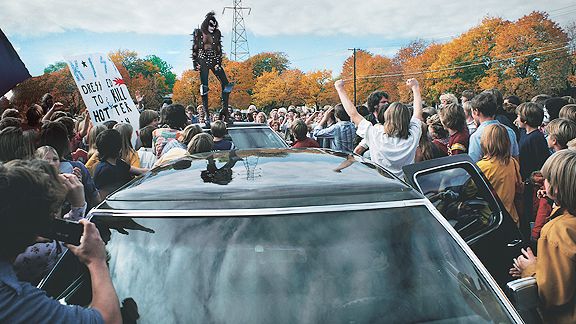 The plan worked. Cadillac went on to win the rest of its games that season. When KISS heard about the Vikings using their music as inspiration, they made plans to visit the school during Homecoming the following year. On the afternoon of Thursday, Oct. 4, 1975, KISS arrived at Cadillac High School. And the party was on. (Photo courtesy of Waring Abbott) 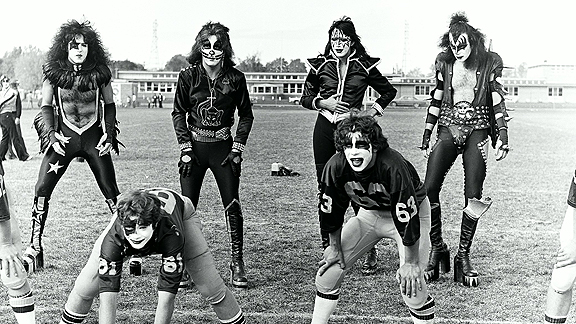 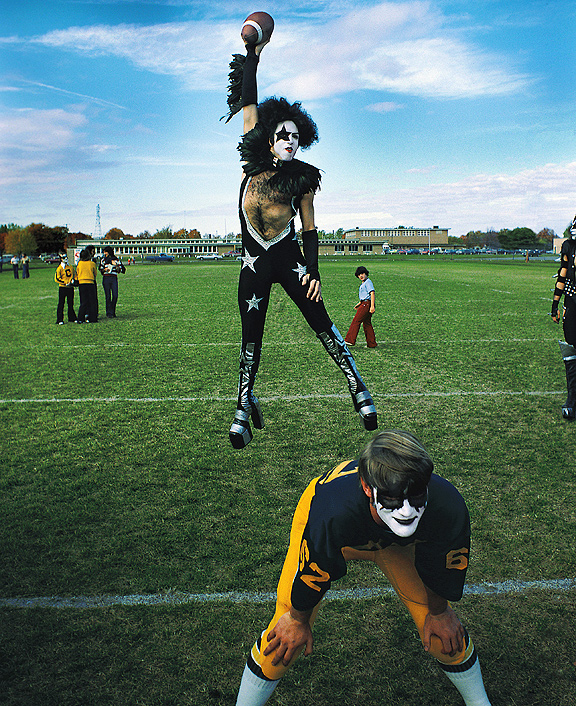 Neff remembered that the members of KISS wanted to do something ”footbally” with the team. ”Brines and I looked at each other and said, ’Footbally?’ Well, Paul [Stanley] turned out to be a pretty good athlete, he could jump and run even in the big shoes, [and] throw the ball pretty well.” (Photo courtesy of Waring Abbott) 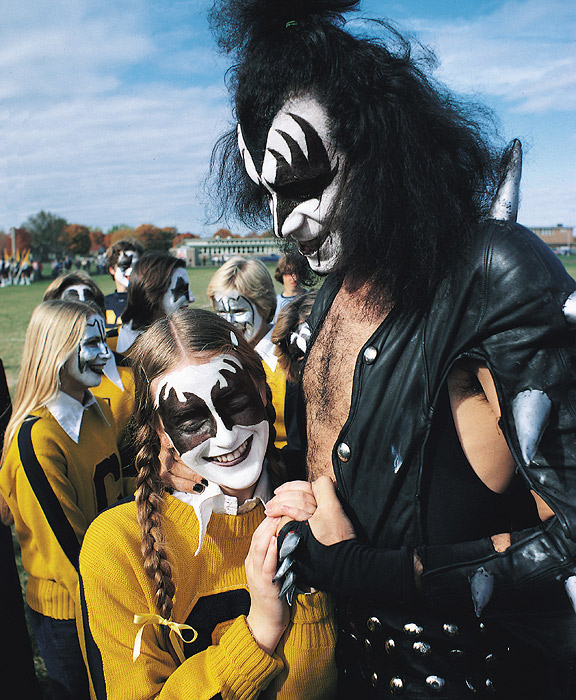 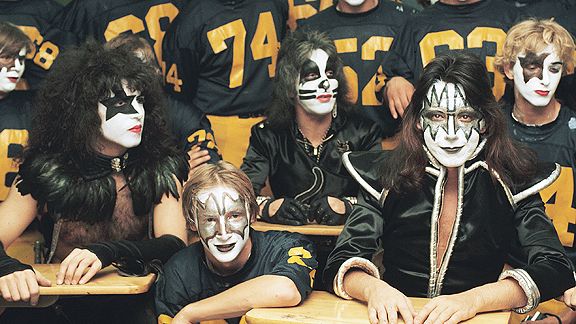 The band then went indoors to answer questions and pose for photos with the students of Cadillac High School. Bill Barnett, a sophomore wide receiver on the team, recalled: ”They gave us a fire-up talk, they talked about their music, they talked about New York and where they came from and they were just so happy to be part of our football team. Here was a national band, a touring act, they’re just at their peak, they’re coming up, it’s the biggest time in their careers, and to be spending time with small-town America, it was just amazing.” (Photo courtesy of Waring Abbott) 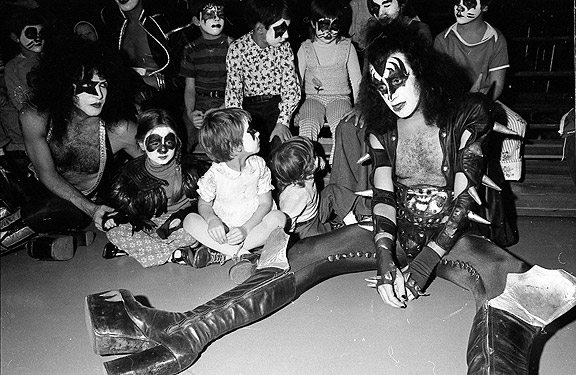 After spending time with the team, some younger siblings and teachers’ kids also got time with the band. Simmons remembered one particular conversation: ”There was a five-year-old boy who I was having an argument with, and he was criticizing me for putting on the makeup wrong. And I’m arguing with him: ’Look, you’re not qualified to say that, you just learned how to wipe your butt — I know how to, I’m Gene Simmons.’ He goes, ’Yeah but the corner doesn’t have the downward swoop, you went up.’ Sure enough, the little putz was right.” (Photo courtesy of vintageKISSphotos.com) 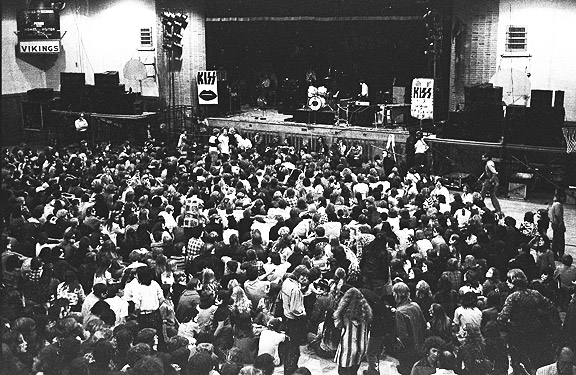 Later that evening, KISS took to the stage in the school’s gymnasium for a concert which was never forgotten. Neff recalled the show: ”It was incredibly loud — I’m talking standing-near-an-airplane-engine, make-your-ears-bleed, drive-you-back-into-the-back-wall loud. The gym had windows along the upper levels and we opened those windows, and there are stories about people who sat in their backyards a mile and a half to two miles away and listened to the concert.” (Photo courtesy of Cadillac News)

Danny Arruda is a feature producer for ESPN’s Enterprise Unit.