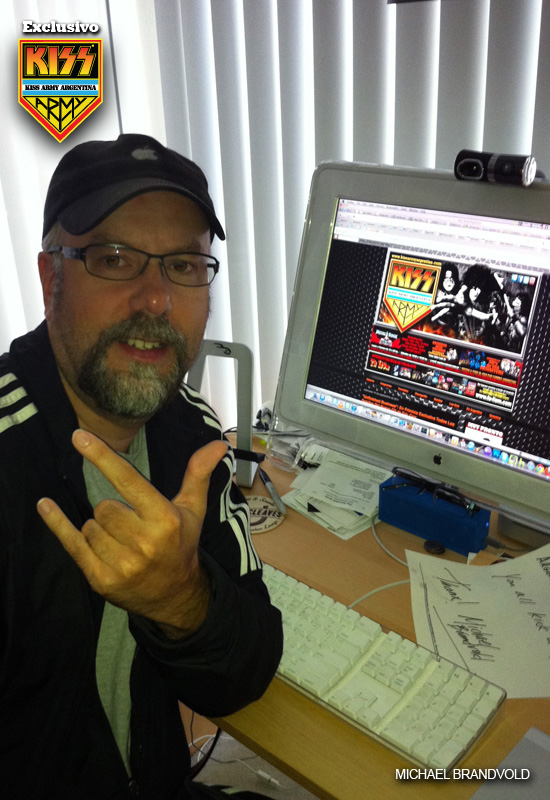 Michael, it is truly an honor that you granted us this interview. You may not be the most recognizable person for many KISS fans, but you surely have great stuff to talk about! You have not only been a KISS fan for years by now, but you have also workedclosely with them, the Hottest Band in the World. Let’s start from the beginning: since when areyou a KISS fan? Why do you admire them?

I have been a fan since 1976 when my mom bought me my first KISS album. Why do Iadmire them? I think that answer has changed over the years, but I think the biggest thing I admire is their attitude about doing it their way and not caring what anybody else says is right or wrong. Anything ispossible!

The world seems to be quite a small place sometimes… After you graduatedin the Mankato State University you joined DKP Productions, a managing company for artists, andfrom there you managed The Ultraviolet, a band that Gene Simmons Records wanted to sign with.How and when did this happen?

This would have been around 1989. I had submitted the demo tape for The Ultravioletto Simmons Records and was surprised one day when Gene himself called and said he liked the musicand is interested in signing the band. We talked for about 10 minutes where he went over the deal pointsof the offer. At this point everything was turned over to a lawyer to work on. That year when KISS came toChicago for the Hot In The Shade tour Gene invited the band and myself to the show, and even asked theband’s lead singer to come to his hotel room to write some songs. Unfortunately, shortly after all of thisSimmons Records ceased operating and nothing more happened.

Let’s move to 1995, the year in which “KISS Otaku”, your first KISS website,was born. You learned html language and you surprised many people with that great site…

And then Gene Simmons contacted you to manage the official KISS website,“KISSonline”; how did this happen?

August of 1998 I came home from work to a message on my answering machine fromGene. He basically said he had a business proposition to discuss with me and would I call him. Of course Icalled him back; he asked me what I was doing for a job and if I would be interested in creating the KISSwebsite they would be launching in a couple months. As Gene said, he can’t promise what will happen,but he can open a door for me, but I would have to decide if I wanted to walk through that door and it wasup to me to make the most of the opportunity.

As you probably imagine, “KISSonline” is somehow a source of inspirationfor us. You worked for about seven years to make the official KISS website a portal that receivesmore than 500,000 visitors a month. That is truly awesome! Please tell us, how was that experienceas webmaster of “KISSonline”?

It was a dream job, I was paid to be a fan. I was overnight given access to my favoriteband and told to build a website that KISS fans would love. So I always kept that in mind when I didsomething on the site… would the fans like this?

Who took more responsibilities for that website, you or KISS?

For the first couple years I pretty much ran the site without band involvement. Around2001 they became more interested and started to have more involvement. Until 2005 when I left whenboth Gene and Paul were deeply involved.

We know that “KISSonline” has not been your only experience with websitesfor artists. You have also managed the websites of many different artists, such as Madonna, U2,Mötley Crüe, Ozzy Osbourne, Meat Loaf, Fleetwood Mac and Rod Stewar, to mention just a few of them. How was your experience in “KISSonline” different from the rest? Would you say that so far it has been your best work?

KISS were the most involved of any artist. They cared more about their website thananyone else. They were personally involved in many aspects of the site where other artists had zeroinvolvement. Yes, KISSonline was the best website and fan community I built.

Your work in “KISSonline” has not been easy, though… You have personallyundertaken the task of promoting online very different aspects of the band, such as the movie“Detroit Rock City”, the release of “Psycho Circus”, the Box Set and “KISS Symphony Alive IV”, aswell as other products with the KISS brand, such as the Visa KISS card. Can you please tell usabout a typical day of work for the KISS site?

Typical day, wow! That would be different every single day. I might spend a couplehours updating or building web pages. This was years before things like Joomla or WordPress so for a fewyears every page in the site was hand coded. I might be working on new ideas or sections for the site.New graphics and designs for the site. Always updating content.

We guess that there is one day in particular that you remember with prideand emotion: the day you received the RIAA (Recording Industry Association of America) certification as an acknowledgement for your participation in promoting “Psycho Circus”, the BoxSet and “KISS Symphony Alive IV”; if we add that to the fact that you were a fan of the band, aswell as an employee… well, that is quit huge, isn’t it?

These are things I truly only dreamed of when I was a fan, I am extremely proud of theRIAA awards I have received. They are probably my most cherished collectibles.

Another relatively unknown fact for many fans is that you have beenresponsible for the development of the VIP packages of the KISS World Domination Tour in 2003,that included exclusive access to the band, preferential tickets, photos with the band members,exclusive merchandise and other great stuff as well; those packages that you managed became amilestone for the subsequent VIP packages that the band implemented later on. You have left KISSa great business. Please tell us more about it.

McGhee Entertainment called me prior to the tour asking if I wanted them to hold anytickets for the tour to sell. I said yes, not knowing what I was going to do with them just knowing I wantedto sell them. I knew these would be great seats. I then thought about what would every KISS fan want?Easy, meet the band and get a photo. I knew fans were paying $500 or more to just buy scalped tickets inthe first couple rows. So if I could add a meet and greet to a ticket up front fans would definitely buy them.I had no idea if the band would do a meet and greet at each show, but I presented the idea to Doc whoimmediately said yes, the band will do it in makeup. I knew the fans would love this and that even at$1000 a ticket it would be worth every penny. And it was! The band makes every fan backstage feelspecial and important. They did it better than any other artist I did VIP packages with, again KISS reallymade the fans feel important.

Yours is an amazing story… You started as a KISS fan and then becameinvolved and worked closely with them, thus generating great business opportunities. But sincesome time ago, you decided to be “just a KISS fan”. Why did you leave the rest?

Being a paid fan is great, but I ended up at a new job that paid me better. Andultimately led to me being able to open my own marketing company, Michael Brandvold Marketing. I willalways want to have my own business and just enjoy my memories of KISS.

Being a KISS fan and having had the opportunity of being close to them (adream for any fan), would you say that there is one memory in particular regarding them that for any reason, it is stuck on you forever?

Probably when Paul invited me to his 50th birthday party in Hollywood. I told him I wassurprised to get the invite and he said of course you would get a invite you are part of the family.

During your time with KISS you have witnessed many different moments of the band; which is your favorite one and why?

Hmm, tough one. Maybe when KISS played God of Thunder at WCW Wrestling. Igrew up as a huge wrestling fan, so in one night meeting all the wrestling legends I grew up with at a KISSevent was really amazing.

You also had the chance of joining them in some of their tours; which wasyour favorite?

The Farewell Tour of Australia. Australia is an amazing country. So beautiful. Thepeople were amazing. The shows were also incredible, possibly the best lineup of the band… Gene, Paul, Ace and Eric Singer.

Kiss Army Argentina: When we look at your Facebook profile we see that you are not only a fanbut also a collector, and in that sense, being close to the band meant the possibility of havingaccess to their vast merchandise catalogue; is there any item in particular that you were trulysurprised at when you first saw it?

I think the KISS Koffin really had my head shaking, lol.

What are you currently up to?

I own my own marketing company Michael Brandvold Marketing http://www.michaelbrandvold.com/ that provides marketing services to many clients, including those inthe entertainment field.

Can you please tell us about your site “MyKisslife”, created in 2009?

It was just a way for me to tell my KISS story as fans were always asking about what itwas like.

Do you currently keep in touch with any former or current member of KISS?

Not on any regular basis.

Can you please tell us an anecdote or story that you lived with the band?

During the Farewell Tour in Reno, NV I arrived at the venue around 4pm and waswalking down the loading ramp into the backstage area. There were always all sorts of KISS road caseslined up and it was not uncommon to see a roadie laying on a case, getting some rest while things werequiet. As I walk down the ramp I see someone laying on a case, as I get closer I noticed it didn’t look like aroadie. Turns out it is Ace… he was laying down resting on the cases. I just had to laugh at seeing that.Ace is rock n roll.

How much has “KISSonline” changed since its creation up to now? What isyour opinion on the site today?

Completely different people are running the site now. They have removed much of thecontent, show reviews, album reviews, photos, scans and videos, I had posted on the site. Much of thesite features are no longer live on the site. I think it is a shame they removed all of this, it was somethingthat showed you that time in the band’s history. It feels like a news site now and much less a site wherefans can interact with each other and contribute content to the site. I really lost the feel of a site thatprovides you a history of the band and deeply involves the fans.

Finally, Michael, could you please leave a message for the Argentine KISSfans?

Thank you to all the KISS Army members in Argentina you all rock… everyone whostarted visiting KISS Otaku and then KISSonline!

Michael once again, thank you! for your kindness and the time you devoted to us.