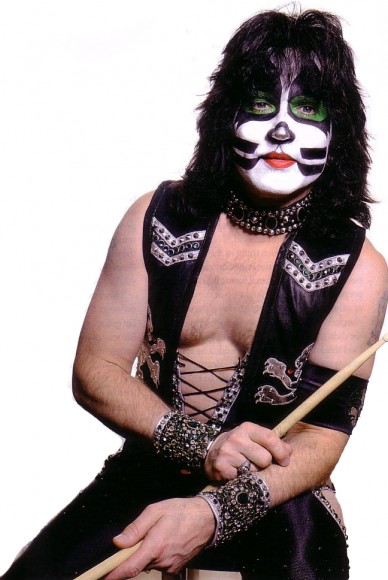 First thing, Eric, we’d like to thank you very much for your time, your kindness and for being always available to speak with us. Let’s start with the interview.

Kiss Fever: Have you guys planned some new stage tricks for the new KISS show?

Eric Singer: We will have some new ideas for the next tour. Not sure exactly what as it is a work in progress…

Can you tell us something about the KISS Cruise?

You have to attend to find out the surprises that are in store for the Kruise ! 🙂

We reckon that KISS, at this point of the career of the band, has nothing else to prove. In your case, being a member of the band for twenty years, do you think that there’s still something special to achieve for KISS? What are the goals the band is after nowadays?

KISS is only KISS at this point. We make music that is not in competition with anyone else or trying to chase trends. MONSTER will again be a testament to this !

Do you have any plans to record again with ESP?

No plans at this time, but you never know what might happen 🙂

What can you anticipate us about the MONSTER sound? Is your work in this record closer to that in ”Revenge” or in ”Sonic Boom”?

We do not like to give a reference to other records but that seems to always happen as a way to let people know the style or direction. MONSTER will stand on i’ts own and will be Monstrous in sound!

We’d like to know about the drum kit you’re using in the recording. Is it very different of the one you used in ”Sonic Boom”?

I am using the recent ”live” PEARL kit I had been using on recent KISS shows. It is a great sounding kit and fits the sound and vibe of MONSTER for sure.

Have you participated more or less to decide the musical direction of the new album? Did you have more freedom to compose?

This is even more so a group or band effort. We are ALL actively involved in every step of the recording…

What inspires you when you’re composing a song and/ or your drum parts?

I always keep an open mind and ears and listen to everyone’s ideas. I always play for ”The Song”

Gene said recently that the new album will be a mix of ”Destroyer and ”Revenge”, casually both produced by Bob Ezrin, a guy you´re already worked with. He seems to be a producer who pays a lot of attention to details, who tends to do very technical arrangements. Is there a point in common with Paul Stanley work?

I think no one knows how to make a KISS record better than KISS and especially Paul Stanley. He has been there for every step of the bands career. And yes Bob Ezrin has been a great influence to anyone who has worked with him. I am sure that is factored into all of us.

What are the most common obstacles a drummer has to overcome in the recording sessions?

There is always the pressure on the drummer first to get the foundation recorded and establish the vibe and tempo of a particular song.

Do you think ”Monster” could become a new KISS masterpiece, a new classic?

Do you agree with the concept of ”playing less is playing more”?

Less IS more in Rock & Roll ! It is about the vibe, attitude and songs. KISS is Rock & Roll and about feelgood music ! I always play for the song and music first.

What are your views on nowadays music? Is there any place for feelings among so much technology?

It is what it is. You can embrace it and use it to your advantage if your smart.

We really liked ”Sonic Boom”, it’s a very good sum of KISS’ career. Two years later, watching it in perspective, are you happy with the results or do you think it could have been even better?

You always make the best record you can at a given time. We love Sonic Boom and are falling in love with MONSTER now…

Gene said that ”Sonic Boom” was the best KISS record in thirty years. Why didn’t you play more songs of it in the live shows?

This is always a dilemma, there are just too many KISS songs to be played in a live show. We did 3 from SB.

Listening to the records, you seem kinda constrained in comparison with the way you play live and the great moments you achieve on stage. Do you have freedom to play your parts in studio or do you play with previous instructions?

I play for the song always first. Live I have a little more breathing room but try to remember to play for the Band not myself…

What did you feel the first time you wear the cat make up? How does it feel now?

It was something unique the first time. I am proud to be in this band and blessed…

For the new show, is there gonna be new costumes?

Is Argentina part of the new world tour?

What are your personal views of Gene, Paul, Tommy, Bruce, Ace and Peter, musically speaking?

I think everyone has played a big part of KISSTORY. I respect them all greatly and what they have done for the band on all levels.

Talking about the KISS setlist, every fan has one of his own. Were you able to choose, what would be the five KISS songs you would like to play and sing live?

We already play them !

Which one of the KISS albums has the best drum sound, and what is the worst?

COTN is best, Hotter than Hell the weakest

In your opinion, which one is the best KISS album ever? And your all-time KISS favourite song?

Is there any song you’re just tired of playing? Is there any special song that you would like to play but the band doesn’t do in a regular basis?

I am fine playing any KISS songs

Since the people that will attend the KISS Cruise won’t be ”casual fans”, are there any plans to prepare a special ”hardcore fan” set list, just to give them something special?

I am sure they will be surprised and very happy…

Sonic Boom was never released in Argentina and most Latin America but Brazil.The remasters were never released down here, either. Who do you think we can blame for that? Why don’t you just sell the albums at the venues?

That is a good question that I do not know the answer to… hopefully the record will be made available there sometime in the near future.

Are there any full recorded songs that were left out of Sonic Boom?

Most of KISS official books and DVDS don’t have Spanish subtitles. If you are a KISS fan and don’t read or speak English you are doomed. Is the band going to do something about it?

I am not sure about that. I think most bands release their products the way they were recorded.

Does it bother You to attend public events representing the band while Gene or Paul are resting in the hotel?

I love doing KISS Expo’s and fan events. This is by my own choice 🙂

When KISS played in Argentina for the first time in 1994, people missed 3 songs in particular and during the shows, they were asking them loudly: ”Crazy Nights”, ”God Gave Rock ’N Roll To You II” and ”Shandi”. KISS came back in 1997, 1999 and 2009 and we still didn’t have the chance to hear them. Since two of the song were played on the Sonic Boom tour, and ”Shandi” is always performed in Australia and New Zealand, is there any chance to heard them next time you visit Argentina?

We do whatever songs are prepared for a tour. Maybe next time in Argentina one or all of those songs will be in the setlist ! 🙂

Many Argentine fans complain about the lack of official merchandise stands in the stadium every time KISS plays in Argentina. Why does it happen? Who is in charge of it when KISS is on tour? Could you please pass him/her this comment?

Many times the local promoter is in charge of merchandise at the venue. KISS does not always have total control over these issues.

Another local fan concern is about the lack of chances to buy platinum or gold tickets to access the meet & greets via the website for the Argentine concerts. They are simply not for sale down here. Why is it so? Again, would you please pass this comment to the people in charge?

🙂 Again, depending on the local promoter, ticket packages are not always in the band’s control in all situations. We always do our best to make everyone happy !

That would be all, Eric. Thanks again for your time and kindness. One last thing: would you please send some greetings for the Argentine and south American KISS fans?