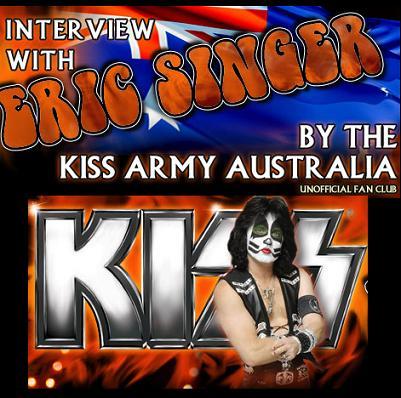 1: It’s been a little over 18 months since the release of Sonic Boom, an album which had the band much sounding much closer to it’s trademark 70s sound. How do you see that album now? From your perspective was there anything you though ”maybe I should have done that differently” or ”I didn’t quite nail that”?

SONIC BOOM was really good and was the first step in the right direction for KISS. The newest record we are now working on at this time will show a natural progression from SONIC BOOM to KISS 2011 as you will all hear soon enough.

2: From the outside looking in it seems as though the band is quite early in the stages of preparing the follow up album. In going about the preparation of the album is there a focus on creating an album that follows in the vein of Sonic Boom or is it more of a case of seeing where the band ends up once tracks are ’in the can’?

We are already knee deep into the new record as I write this… All’s I can say is you will all be very pleased. The material is stronger and more riff oriented and very hard/heavier style.
Everyone that has heard material so far is raving about the stuff and we are too 🙂

3: Has your involvement on the new album been any different to Sonic Boom, or earlier KISS albums?

As a band we are more comfortable and have more time together under our belts now that really shows in our writing, performances etc…
We work out all the material together in rehearsals as a band before we go into the studio. It really makes for better vibes and performance overall.

4: If you could pick any three people in the world to have dinner with, who would you choose?

Jesus, Jimi Hendrix and…Freddie Mercury
(I just said what came to mind off the cuff…)

5: The KISS Army seemed to really enjoy the early sneak peaks of the band in the studio that were posted on KISS Online, however they seem to have stopped. Will there be a return of these clips as the process continues? Are there any intentions to release a BLU RAY / DVD around the creation of the album at this early stage?

We did post another clip from Tommy just the other day. There will be more as we progress along. I have no idea what DVD or other stuff may come of it all. There will be KISSOLGY IV sometime sooner than later but not sure what all will be included in that.

But it will be good 🙂

6: What was the favorite moment of your career as a drummer for KISS so far ?

The overall experience has been pretty damn good I must say. I am proud to be in such a kool band that I always dreamed of being in. There really is no other band like KISS. ”Special” is not even a just enough word to describe it… 🙂

7: Since putting on the make-up it would seem that you have been quite conscious of taming down your drumming to be more in the style of the 70s material. Is that something you expect to see continue into the new album? Particularly amongst the Australian KISS Army it seems that there are a number of fans who loved your work on Revenge and the KISS My Ass Downunder tour and would like to see more of your flair on studio releases.

I have always played for the ”song” or band first. KISS in some ways has come full circle more back to it’s roots in style musically and that is reflected in the live playing and recordings. I never had a problem adapting to whatever is required of me. That is the sign of a seasoned musician. Leave your personal stuff and ego at the door. Play for the music!

8: Any plans of hooking up with your buddies for any ESP shows again in Australia when you have some time off ?

ESP is a fun band that we try to do schedules permitting. We did a few shows in march in Europe this year. maybe more later in the year somewhere ? Would you have us again ?

9: What is your message to your fans in Australia ?

I really look forward to coming back down there again sooner than later. I have a special connection to Australia and feel like it is my second home in some ways. Beautiful country full of beautiful people.
Really an amazing place.

10: Lastly, of course we have to ask this one, are you aware of any plans for a return trip to Australia?

I know KISS will come there again. and Me too !

I love and miss the place dearly
Eric

Thanks very much for your time Eric and we all hope to see you soon in Australia !