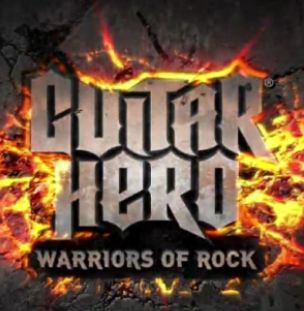 Ask Gene Simmons of Kiss about voicing the character of the Demi-God of Rock in the new Guitar Hero: Warriors of Rock and he is quick to set you straight.

”Character is not the right word. That feels like a Ziegfeld Follies show,” he says. ”This is a persona.”

That persona, the Demi-God, is at the heart of the story in the new Guitar Hero game. The game’s developers at Neversoft took as a concept the ”Monsters of Rock” and made transforming the game’s characters — Axel Steel, Judy Nails and the gang — into part of the story line. The player must shred through the game’s songs to unlock those character’s superhero modes needed to help the Demi-God defeat The Beast that’s threatening rock. ”And then of course the next logical conclusion was to have the iconic Gene Simmons voice the Demi-God of Rock,” says Neversoft project director Brian Bright, ”who better to push it way over the top!”

Q: How did you get involved with Guitar Hero?

Gene Simmons: I’ve always been aware of Guitar Hero, obviously, because it’s an iconic brand. I got a phone call from management saying that the people at Activision are interested and so on and so forth. … Initially when I got the call, I wanted to know a little bit more. Is it going to be the same old, same old? What do you want me to do? Do you want to use a Kiss song? Is it just the general stuff and they said, ’No, no, no. We want to put Guitar Hero on steriods. We want to do the monster of monsters. We want to have the largest collection of rock songs, 90, we want you to be voice of Guitar Hero including becoming the Demi-God. You know, my ego, which is completely insatiable, started to salivate. If egos can. Mine can. I can tell you whatever I imagined the experience to be like, I was completely overwhelmed when I went to the Activision offices. … I actually got to play a much earlier version, so I tried sitting down figuring this is going to be a demonstration of it. You immediately wind up getting up. It becomes a full body experience. From the visuals to the music, this rocks.

The story seems to be straight out of a concept rock album.

There is a story, but the story is a multi-headed beast with so many different permutations, which is a big word like ’gymnasium’. You are part of the story. It can go in almost any direction. The most important part of this is it has an empowerment kind of thing. You become part of it. It is you. You are it. You may not be able to be the Demi-God but you’ll know what it feels like. … You get to bring out the inner rock star in you. And usually when you say, ’rock star’ that means guys. This is for gals, too. Girls can get in there and rock out right along with the guys. In the cave man days, people used to play air guitar because everybody wants that feeling. This takes you in places you never imagined you would be.

Kiss has had some history with video games. What does having the band’s songs in a music game mean for the band?

It’s always about spreading the brand, on a purely business platform. You get new fans, while they are playing the game kinda go, ’Gee that’s good stuff.’ And while it does that for Kiss, and while I am very proud to be the voice of (the game), this also shows the players and the fans the wide range of rock. Everything from Black Sabbath to Queen and Kiss, but also to the Muse and some of the newer bands. This is all rock, though.

How do you think your character in Kiss compares to the Demi-God?

Persona. Well, clearly the Demi-God is my child and has my DNA and the designers, who else would you take it from? The Jonas Brothers? I am the original God of Thunder, after all.

Have you played Guitar Hero?

I have. The older versions. I think number 4. What’s striking about Guitar Hero: Warriors of Rock is how more 360 it is, just the angles and perspective. Like I said, full body experience. The challenge will be for you to play this sitting down. It’s not going to happen. And I like the idea that it’s a social experience. You won’t want to play this alone. You know, there’s a party going on. There’s music, flirting, whatever. Whip out (the game) and watch this become the center of attention. It will take over. Everybody’s going to want their turn.

There’s been other Guitar Hero games devoted to bands such as Aerosmith and Van Halen and other music games based on the Beatles and Green Day. What about Kiss?

Well, every company knows that — because Kiss has been at the forefront of pushing the limits in terms of live shows and technology and licensing and merchandising — we wouldn’t just do another Kiss game. The Activision people already heard my take on what it would take to do a Kiss game — Mount Rockmore: Guitar Hero. You see Mount Rushmore with our Kiss faces on it. And it would obviously be a different experience. It would be a Planet Kiss. Oh, I’m sorry, I already trademarked that. Kiss is, by some marketing estimates, the four most-recognized faces on the Planet Earth. Do you know what the King of Sweden looks like? That’s funny, everyone in Sweden knows what Kiss looks like.

So are you and Activision in discussion about this? Or is it just an idea floating around?

They are going to have to come to us on bended knees. The difference between Kiss and every other band, that includes Elvis and Beatles, who we outsell in merchandising and licensing together, Kiss has been and continues to be the juggernaut of all licensing and merchandising, certainly in the music world. We are like Disney without the overhead. We have 3,000 licenses. Everything from Kiss condoms to Kiss caskets. We’ll get you coming and we’ll get you going. But in order for our friends at Guitar Hero to consider doing a Kiss game, they are going to have to do it on our terms, which is in your face, over the top… even taking it to a higher level than Guitar Hero: Warriors of Rock.