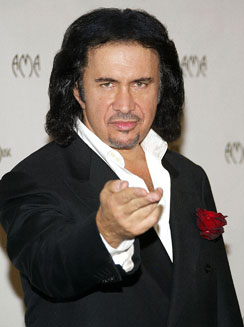 Gene Simmons is enamored with numbers. The mouthpiece of Kiss will tell you that his band has sold more than 100 million albums and earned 24 gold records and that his reality TV series, ”Gene Simmons Family Jewels,” has had 107 episodes and his co-star son, Nick, is 6 foot 7.

Simmons will tell you that his middle name is ”Arrogance.” And he’s proud of that. Here’s what the boastful, big-tongued bassist/singer/blood drooler, who turned 61 last week, had to say in a post-soundcheck phone call from Uncasville, Conn. He talked about heading to the Minnesota State Fair on Saturday.

Q: You’re playing outdoors for the first time in the Twin Cities. What’s the difference between outdoors and indoors for Kiss?

A: Less limitations, of course. First thing we do is make sure no local airports are nearby. If there are, we warn all low-flying aircraft not to fly overhead because our fireworks are pretty high — anywhere from 100- to 300-feet high. It’s like we’re Transformers. Our stage show is so big, but it’s also so flexible that we can add on pieces and just get as big as any outdoor stadium. For the last two years, we’ve been playing mostly stadiums, racing parks, corn fields, all kinds of stuff.

Q: How hot is it in your costume when you play outdoors?

A: Very hot. In Indianapolis, it was 107 when we hit the stage. Now get into a sun tanning bed. Now wear armor studs, a leather codpiece, put on 35 to 40 pounds of extra weight when you get up onstage. And, oh yes, I forgot to mention walk around onstage and try to be a little energetic if you can on 8-inch plaform heels for 2 1/2 hours.

Q: How much more weight do you lose outdoors vs. indoors?

A: That’s a good question. I don’t know. We do have massive industrial air [blowers] — imagine a vacuum cleaner but it’s backwards where it pushes a lot of air toward you. You must get air into your lungs. Between the fireballs and stage lights and everything that goes up onstage, it’s easily over 100 [degrees] onstage.

Q: This summer, Kiss is playing at several state fairs. Whatt appeals to you about the fairs?

A: The idea is to take what we do to the people instead of assuming the people are going to come to us. There’s always a new audience out there, and there isn’t any group of people that we shouldn’t play to. Because Kiss is all things for all people — whether you are 3 or 300. You see everybody at the shows — kids, their parents, strippers, lawyers — sometimes together, sometimes not.

Q: Kiss played in the Twin Cities in November. How will this show be different?

Q: Why did you finally decide this summer to have drummer Eric Singer sing ”Beth,” which was made famous by Peter Criss?

A: We did this, not because we had to, but out of deference to Peter Criss, who was an integral part of the original band. So enough years have gone by. [Criss left in 2004.] This is a courtesy, more than anything else. There are guys who are anywhere from 3 to 30 years old who have no idea who previous members were and who don’t care. They come out in the tens of thousands and they want to see the Kiss of today, with Eric and Tommy [Thayer].

Q: This week, the Twin Cities had Lady Gaga on Monday and Tuesday and then we’ll have Kiss on Saturday.

A: She’s terrific. I’ve only seen bits and pieces of her act [on video]. But Gaga and I have spoken on the phone. She told me she has Kiss dress-up parties where they put on the paint and have a good old time. Look, you have to tip your hat to anyone who goes the extra distance for the fans. That’s what it’s all about. People are spending a lot of money to go to a show and give them a show, for God’s sake. Cut it out with the acoustic guitar and charging full price. Have a light show or something. Give people something for their eyes as well as their ears.

Q: How much time do you spend working on ”Gene Simmons Family Jewels”?

A: Whenever I’ve got a moment to spare. We’re nearing the end of Season 5. They follow me around. You know that song? ”Wherever I go/Whatever I do…” That’s what the show is about.

Q: What did you learn from Donald Trump when you were on ”Celebrity Apprentice”?

A: Donald learned a few things from me, if you don’t mind me saying so. How’s that for arrogance? That’s my middle name, by the way. [He learned] How to have a better hair style. [Simmons laughs.] If you can’t have fun doing this, it’s not worth it. We’ve known each other a long time. He’s a solid guy.

Q: I voted for Kiss No.1 on my Rock and Roll Hall of Fame ballot last fall. How did it feel to finally get nominated, after so many years of eligibility — and then not get inducted?

A: It’s backroom politics. Honestly, we don’t loose sleep over this. It’s not the most important thing in our lives. It used to mean something. I don’t think it means anything near that much. Once you put Madonna and rap stars in it, it ain’t rock ’n’ roll. It does a disservice to rap and to disco and other forms of music that have very little to do with guitars and drums.

Q: Once you and Paul Stanley decide to retire many years down the road, do you envision Kiss continuing with other performers wearing your outfits and makeup?

A Why not? Of course. Anything’s possible. No rules. It’s supposed to be rock ’n’ roll, after all.