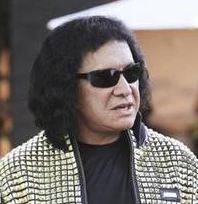 ”Shout It Out Loud”: Gene Simmons is coming to Castle! The legendary KISS bassist (and reality TV dad) brings his demonic presence to Monday night’s episode, “To Love and Die In L.A.” Castle and Beckett trek to Hollywood on the trail of a killer and encounter Simmons in his own Beverly Hills backyard. The rock star recently talked to Wetpaint about exactly why he pointed his Love Gun in Castle’s direction.

Wetpaint: You’re playing yourself on the show, which you’re an expert in…

Gene Simmons: Yes. I get to practice every day.

What version of yourself do we see in this episode of ’Castle’?

The asshole. No, not really. [Laughs] Although that was the name of my solo record a few years back. I’m sort of like Popeye: I am what I am and that’s all that I am.

Is it a comedic bit, or is a bit more serious?

Even when I try to be serious or myself, people laugh at me, but that’s my cross to bear.

How do you appear on the show?

I’m very attractive — I’m stunning! I wear the usual accoutrement. That’s a big word, like “gymnasium.” A studded jacket, but you’ll see what I mean.

And it’s supposedly in your own backyard?

Most certainly. The world is my backyard.

How did this come about? Did you approach them or did they come to you?

Actually, yes, very much. I often watch Castle. I like the repartee. I like the sexual tension. Behind our backs, I know that Castle is getting busy and I really like the tone of the show. It’s got this light but serious thing to it. The scary bad guys are scary bad guys and then the relationship between Stana [Katic] and Nathan [Fillion] can get hot. Not since Moonlighting, actually, have I seen a show like this. So I was actually quite honored to be asked to appear.

What was it like working with Stana and Nathan and find out what they’re like as people, as opposed to their characters?

It was a real thrill for them to work with me! No — we all had a great time and they were very charming.

Are you critical to the storyline, or is it more of a side bit?

Well, both. Although, I will say that the writing on the show in particular, I think, is very strong. They’ve got writer who’s name is Alexi Hawley who’s done lots of stuff on the show. Even the title, ”To Love and Die In L.A.,” is kind of an homage to one of my favorite movies that came out 20 years ago. ”To Live and Die in L.A.,” if you remember that one. So there are these kind of winks to the people who know, and then to the masses it just kind of sounds like a cool title. I think the writing is very strong, really high-end type of stuff, especially for TV.

Are we going to see more of you acting, playing roles not as yourself any time soon?

Sure. I’d love to do that, but it really just has to do with when the planets align and I have time to stick my head up and grab some air. We have the KISS juggernaut, which is making a new album and we’ll be doing 20 shows this summer only, after a two-and-a-half-year world tour. We have Gene Simmons: Family Jewels, now the longest-running reality show of them all in Season 7. Just a whole host of activities that take up the time of day. So I literally had to tear myself away from being in the studio with the guys, recording, because I wanted to do Castle. I’m blessed and lucky to only do the stuff that I like. So when something like Castle raises its beautiful head, I certainly want to get in there.

When you hit the road as KISS nowadays what’s the primary difference from the early days of being on tour?

Well, you have to live up to the legend. Everybody talks about the KISS live show and that nobody touches it. So when you go to see everybody from [Paul] McCartney to [Lady] Gaga and you see pyrotechnics or light trusses that move or stage shows with video screens and all of that, it doesn’t come from The Archies. It only comes from one place. When you see wrestlers wrestling with pyro over their heads and big flashing lights and fog on stage, that comes from one place and if you ask Vince McMahon, that’s what he’ll tell you: ’I wanted wrestling and KISS.’ That’s why even some of the wrestlers wore makeup – but I’m not shy about pointing any of that stuff out to anybody, by the way!