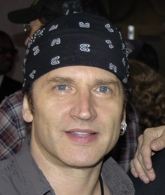 The idea is pretty damn solid. Four guys, inspired by the New York Dolls but too ugly to pull off the whole androgyny thing, decide instead to dress like Japanese Kabuki warriors, spit blood, breathe fire and pen songs about staying up all night and partying ev-ah-ree day. That’s KISS, who now, after 36 years of lineup and costume changes are once again circling the globe on their Hottest Show On Earth Tour. We caught up with KISS drummer Eric Singer – in the band on and off since ’91 – to talk about the KISS machine, the fabric of Americana and what it feels like to be a permanent understudy.

The KISS monster keeps growing. Why is that?”

I think it’s a couple of different factors. We noticed a change when we toured Europe in 2008. We noticed that all of a sudden, ’Wow there’s a lot of kids here, like teenage kids.’ It wasn’t just Mom and Dad bringing little kids to the show, like babies, it was teenage kids coming on their own, like you would expect with this brand-new band or a young band. We thought, ’This is just Europe,’ because we hadn’t been there in a few years. And then we went to South America and Australia and New Zealand, and everywhere we went it was the same thing. It was a younger audience.

”The band has become a part of the fabric of Americana. When you think of America, a lot of people think of Coca-Cola or Pepsi, and Dr. Pepper, McDonald’s, Disneyland, Universal Studios. I think KISS fits right in with those things. It’s part of American fabric. It’s become an iconic thing that you think about as part of America. Everywhere you go, you can show the KISS logo or the makeup designs of the guys, and everybody will go, ’Oh, that’s Kiss.’ I mean, they’ll know it even in Malaysia.”

A lot of that is to do with Gene being a master brander, right?

”It’s not just Gene. I love Gene and I respect Gene, he’s very much a business-minded guy, but he’s not the one that invented everything KISS ever did. Ace Frehley came up with the KISS logo. So you’ve got to give credit where it’s due. A lot of our costumes, all the things that we wear now, Paul Stanley sat there and he sketched them and designed them all out himself. When we do photo sessions Paul Stanley goes out and goes to Home Depot, and buys supplies with some of the crew guys, and he puts together the sets of how he wants it to look for the photo sessions. I mean, a lot of the stuff we do is hands-off, but a lot of the creative stuff, I have to give credit, is more Paul.

”But Paul’s not the kind of guy who’s gonna go out and tell everybody, ’I did this, I did that.’ I think people associate Gene as the face or spokesperson of the band. But that’s really more Gene marketing Gene through KISS. So he thinks along those lines and he’s very creative and comes up with a lot of great ideas. But just for the record, everybody, including myself, have input for things that we do.

”But you know, Gene and Paul have really been there from day one. They started the band. They created this idea of what they wanted it to be, so it really is a partnership of really those two. If you want to think of the one common thread, it’s those two guys.”

The original KISS lineup is so revered by fans, and I know you’ve been with the band on and off since ’91, but when [original drummer] Peter Criss decides to come back, you get ousted. How do they go about telling you you’re no longer needed? Does it make you upset, or do you get it? How does it work knowing you’re basically a permanent understudy?

”Well, I wouldn’t say I’m an understudy anymore. And I actually never looked at myself as an understudy. The bottom line is that it’s a business. Every band can tell you, ’I just care about the music, and I’m an artist.’ They can all say that, but the bottom line is, if nobody buys their records or nobody buys tickets to their concerts, guess what, they’re not going to be in business for very long. If you don’t treat it somewhat business-like and approach it from at least some aspect that would be included in your mindset, you’re not going to be in business very long, because you can’t just be an artist.”

So you didn’t / don’t take it personally?

”Well, no, because it’s business. But look, was I happy when they did the [original lineup] reunion? No. But here’s how I looked at it: I knew that if they did a reunion, it’s like, I can give you a lottery ticket and say, ’Brian, I have all the winning combinations on the ticket, all you have to do is scratch the numbers off and give them the ticket. But you have to do that, you have to go in and claim your check.’ To me, those guys doing the reunion was like a lottery ticket they just had to go cash. So, it was an opportunity they couldn’t pass up, and they knew that, and they saw that the time was right, and it absolutely was. And honestly, I don’t think they knew how big and successful it was going to be.

”Look, I know what I do is play drums. I sing songs, and I like to think of myself as a very solid background singer, but I also know that I’m not the leader, I’m not the front man of the band. I don’t have that ability to go out and front a band. I know that. Some people, their ego can’t get out of the way. They think they need to be a star too, but not everybody gets to be. That’s not something everyone is capable of doing, even if they’d like to do it. I look at my job as a unique thing that I get to do, but I also realize that if I’m not here playing drums, it would definitely be someone else. Don’t ever think you’re not replaceable because everybody’s replaceable.”