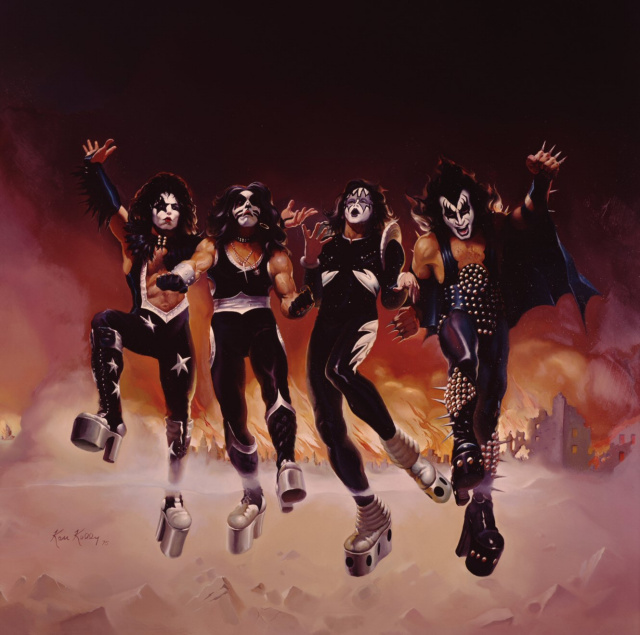 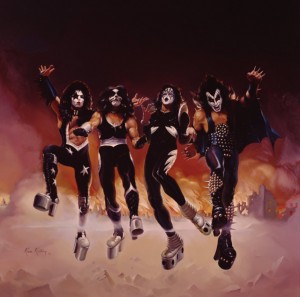 “Destroyer boasts plenty of sound effects, orchestras, and choirs that paved the way for other bands to rip them off for many years to come… easily one of the best albums in the Kiss canon.” – Pitchfork

KISS is regarded as one of the most influential rock and roll bands of all-time and holds the honor as one of America’s top gold-record champions. On August 21, 2012, Universal Music Enterprises (UMe) will release KISS’s 1976 multi-platinum, landmark album Destroyer: Resurrected, newly remixed from the original master tapes by the album’s original producer, Bob Ezrin. Ezrin pulled the tapes from the vaults and painstakingly remixed the entire album, enhancing the sound and bringing out its rich texture and vibrancy, while keeping the integrity of the original recording intact. Destroyer: Resurrected will also include rare and unreleased recordings rediscovered during the remixing process, plus the originally intended cover artwork.

Hot on the heels of their breakthrough hit album Alive!, KISS released their fourth studio album Destroyer which is considered the most ambitious studio recording of KISS’s ’70s catalog. Bob Ezrin, who had previously worked with Alice Cooper, was brought in to produce the album and among the production flourishes Ezrin introduced to KISS were sound effects, strings, a children’s choir, reversed drumming and the eerie, echoing sounds of screaming children over Gene Simmons’ vocals on “God of Thunder.” Upon its release, Destroyer reached the No. 11 position on the Billboard Top 200 and, with the help of the surprise top-10 hit “Beth,” was their first album to go platinum.

Originally released as the B-side to the single “Detroit Rock City,” “Beth,”–the heart-yearning ballad co-written and performed by drummer Peter Criss–was quickly picked up by radio nationwide and became the first top 10 for KISS, climbing all the way to the No. 7 position on the Billboard Hot 100 chart. While going through the original tapes, a forgotten vocal piece that was originally edited out in the final mix of “Beth” was discovered and now, for the first time, the complete original vocal recording has been restored and is included in the final mix. Other rediscovered gems include a complete, alternate guitar solo for the track “Sweet Pain,” now heard for the first time since it was originally recorded. The newly remixed “Sweet Pain” with the original guitar solo will be included as a bonus track. In addition to the treasures found buried in the hours of recordings, KISS classics such as “Detroit Rock City,” “Shout It Out Loud,” “Do You Love Me?” and “God of Thunder” were painstakingly remixed by Ezrin as he fleshed out the drums and guitars, bringing out the bottom end to the bass, making his mixes tight and tough.

In addition, Destroyer: Resurrected will now be issued with the originally intended cover art thought too controversial for the time. Created by artist Ken Kelly, the “brown” cover depicts KISS dressed in their ALIVE! costumes and standing on rubble in front of a burning city in ruins. At the time, the record company thought it was too violent and settled for the tamer “blue” version known today. This release also marked the first time that a comic-book illustration of the band appeared on the cover, confirming that the band was transforming from hard rockers to superheroes.

To this day, Destroyer remains one of the group’s most ambitious recordings and greatest accomplishments. In both Kerrang! and Guitar World magazine it is listed as one of the ”100 Greatest Heavy Metal Albums of All Time” and in 2003, it was included on Rolling Stone magazine’s list of the 500 Greatest Albums of All Time. Now, with today’s state-of-the-art technology, this landmark release can be heard the way that KISS intended.

The unparalleled devotion and loyalty of the KISS Army to the “Hottest Band in the World” is a striking testament to the band’s unbreakable bond with its fans.