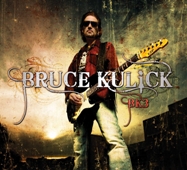 Well, KISS released a new album this year and it was time for ex-members related to unleash their own stuff too? Ace Frehley threw ”Anomaly” to the table and Bruce Kulick serves ”BK3”; who’s next, really? Have you seen e.g. Vinnie Vincent lately working on something? … Don’t tell me it’s just a coincidence, I would not bet my money on this.

Bruce Kulick was the first guitarist I came across becoming familiar with the KISS legend back in the 80s. A permanent member of the American hardrockers for a dozen of years (1984-1996 or something) Bruce met his fate in the most ’hair Metal’ period of KISS, and surely got his name written in gold with releases like ”Crazy Nights”, ”Hot In The Shade” or ”Revenge”. A fine guitarist with a clear sound and notable technique, Bruce had worked with Billy Squier, Meat Loaf and Michael Bolton & BLACKJACK in the past while his post-KISS activities include works with Graham Bonnet (RAINBOW, MSG), UNION (with ex-MOTLEY CRUE singer John Corabi) but also Gene Simmons and Paul Stanley in their latest solo albums. Not to be missed, from 2000 onwards he’s the touring guitarist for American 70s Rock legends GRAND FUNK RAILROAD while he lately also toured with ESP for some shows (Eric Singer’s project).

What will catch your attention in this solo album, mainly, is the participation of various artists and friends of the recording musician. Gene Simmons, his son Nick and Eric Singer represent the wider KISS family, while John Corabi, Steve Lukather (TOTO), Doug Fieger (THE KNACK) and Tobias Sammet (EDGUY, AVANTASIA) wrap up the guest list…in order to save the day for the average songlist? Thankfully I had to use ”average” and not ”shit” as the description key-word (as e.g. in Simmons’ ”Asshole” CD). There are a couple or more of good rockin’ songs, some other dressed in a nice main melody but not completely holding fine standards and some willing to get you to bed before it’s time to.

Twelve songs having little to do with bombastic Hard Rock music, since most of them count on the simple American Rock tradition, is the menu in ”BK3” (three songs had made it to the indie ”BK” EP release earlier in 2009). The guitars sound is quite moody and the same goes for the vocals in many songs, creating the assumption that Bruce possibly wanted to spit out his influence or non-pro activities side of music. From THE BEATLES to NICKELBACK, from Mark Farner’s noise to Bruce Springsteen’s or SOUL ASYLUM’s chronometric motion, from the illustrious sound of Jimi Hendrix and/or Steve Lukather to the patronizing experience of Bruce himself for 30 years, ”BK3” has enough meaning mainly if you’re a guitar-oriented CDs collector, since there’s enough of teasing and intriguing moments inside this early 2010 release. The same goes for KISS aficionados of course (the smooth side of Bruce is as visible as in Ace’s ”Anomaly” album or Pete Criss’s ”One For All” 2007 release).

Would not waste time and money on this one at first sight, but would lean in to it for more personal moments. Songs like the instrumental ”Between The Lines”, ”Friend Of Mine” or ”Dirty Girl” are good examples of songwriting but this is it for the average kickin’ hardrocker, I’m afraid, and nothing more. More modern Rock lovers may have equally enough to dig in this album, to be honest.