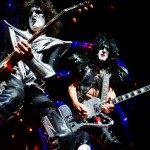 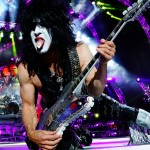 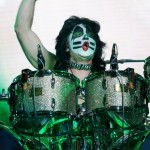 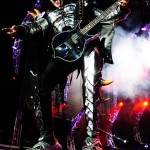 The faithful legions who have been drafted into the Kiss Army invaded Auburn on June 29, donning battle gear(facepaint and platform shoes) and no amount of rain could dampen their spirits. The pre-show squalls eventually gave way, and the White River Amphitheater crowd was bathed in a sea of golden sunshine. Def Leppard, of course, has their own legions of adoring fans, and they were there in substantial numbers, as well, to represent their band on one of the biggest tours of the year.

The opening act, Kobra and the Lotus, really isn’t worth mentioning. The only thing notable was probably one of worst covers of “Barracuda” ever. Note to other mediocre metal bands touring through the Northwest: Please don’t cover Heart songs to try and get in good with the crowd. Thanks.

The set lists for both bands were full of the songs that fans came to hear like, “Photograph,” “Pour Some Sugar On Me,” “Rock and Roll All Nite” and “Detroit Rock City.” Def Leppard started the real show off with a bang playing a killer song from early in their career, “Let It Go,” from the 1981 album “High & Dry.”

That album was well represented, much to the delight of the fans of the British glam rockers, as they played an acoustic version of “Bringin’ on the Heartache” and the instrumental guitar showcase “Switch 625.” On that number, Vivian Campbell and Phil Collen showed that they still have the chops.

The rest of Def Leppard’s set list included the smash hit songs from their two best-selling albums: 1983′s “Pyromania” and 1987′s “Hysteria.” Ever wonder what it would be like to hear literally thousands of people singing “Pour Some Sugar On Me?” Well we found out. After working the crowd into frenzy, the band came out for a two-song encore consisting of “Rock Of Ages” and “Photograph.” The band was tight and Joe Elliot hit most of the ”High” notes.

Of course, now it was time for the spectacle. And make no mistake a Kiss show is a spectacle. The electricity that flows through the air as the curtain drops is contagious.

They blasted through the set with everything you’d expect from a Kiss show. Fire-breathing bassist, Gene Simmons, entertained and engaged the crowd with his stage demeanor. Frontman Paul Stanley runs a tight show and he knows how to talk to a crowd. He told the crowd that Kiss has been coming to the northwest since before many of the attendees were even born. (Give him extra credit for not calling Auburn Seattle.) Later in the show, Paul Stanley flew through the crowd, up to his platform in the middle of the arena and dropped “Love Gun” on the now frantic audience.

Northwest native Tommy Thayer has been in the ”Spaceman” role now for more than a decade, and he plays the part well. Of course, Kiss purists kick and scream and complain that it’ll never be the same without Ace Frehely and Peter Criss. But props to Thayer; he is a guitar wizard and he can hold his own with anyone.

If watching a band that has been shocking, mesmerizing and loving arguably the most loyal legion of fans of any band on the planet is your idea of a fantastic way to spend Sunday night in Auburn, then you came to the right place. Kiss did not disappoint.