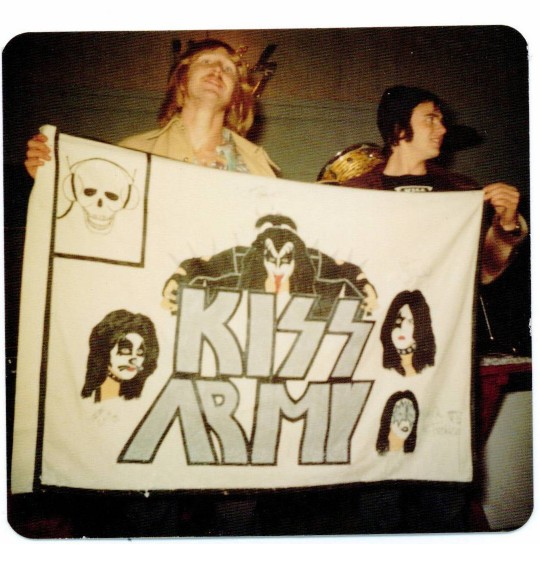 ”This is my music, it makes me proud. These are my people, and this is my crowd”

Those famous lines are from the 1987 smash hit ”Crazy, Crazy Nights”, and the crowd Paul Stanley is talking about is the one and only Kiss Army. A legion of fans who come together to support the hottest band in the land…..and they are everywhere! From America to Argentina, to Barcelona and Bermuda, the KISS Army continues to grow and number in the millions! But in 1975, the Kiss Army consisted of a handful of high school students from Terre Haute, Indiana. Their leader was a man named Bill Starkey, who has his own special place in Kisstory as the man who led a rock revolution, and started a rally cry for ”the hottest band in the worldl”! Recently, I had the privelege to speak to Bill about his place in Kisstory, the fans, and the music that changed his life.

Bill you are the man we can all thank for creating rock’s most devoted fan base, The Kiss Army. Could you tell us how it all started? It’s a great definition of standing up for what you believe in.

I had seen KISS by mistake while watching Don Kirshner’s In Concert one February. I was hoping to see Foghat. KISS blew me away. I was fortunate that my father, who worked in a warehouse shipping records for Warner Brothers, always encouraged my interest in music. Warner was shipping Casablanca Records at the time so my father got me the first two albums by my request. My Dad also got to talk to the Casablanca people so he would tease me about how KISS was touring but he wasn’t shipping any of their records…..they weren’t selling. Of course he teased me about the band’s appearance as well. The group Deep Purple was on the Warner Brothers label and they offered my dad free concert tickets for all of his dedicated work. His record plant at the time pressed most of the world’s vinyl in the 70’s. When he asked me if I wanted to go to my FIRST ever rock concert, I jumped at the chance. However Deep Purple was extremely popular in 1974 and the tickets went fast. They never came through with our tickets.

To make it up to me he asked me if I wanted to see KISS in Evansville, and I agreed. He drove me and my younger brother in his old pick up to a concert with KISS on a shared bill with ZZ Top. It was a cold Sunday night in December. KISS played first and I immediately heard a difference between the live KISS and my records at home. They were incredible! When Z Z Top came out, after their first song, my Dad knew we had seen the REAL headliners- KISS and we left. Now he wasn’t one to enjoy rock, let alone heavy metal, but I think he appreciated the band’s work ethic and how they whipped the crowd into frenzy. He compared the frenzy to a typical Indiana high school basketball game. I’ll never forget those people stomping on the wooden bleachers chanting “KISS, KISS, KISS”.

The next week he dared my mother to take us to Indianapolis to see KISS play in a 5 hour post-Christmas Jam with REO Speedwagon and others. She took the dare and we went. KISS played last, after midnight, when most of the crowd that had come to see REO had left. Again KISS out-performed everybody that night.

Monday morning I was riding the school bus with one of my best friends from school, Jay Evans. Jay already enjoyed KISS at the time but hadn’t seen them live. It was hard for me to explain on the bus. Plus with this being my first two rock concerts it probably looked like I was just exaggerating to many at the time. Afew months later we convinced two car loads of our classmates at Terre Haute North Vigo to go to Indianapolis to see KISS in April. KISS was now theheadliner. That was it, we now had our KISS Army.

We would go back to school bragging about KISS only to be told, “If they’re so good, why aren’t they on the radio?” We couldn’t answer that but we knew the injustice. Jay and I would meet in my basement where we came up with the “Army” theme and started calling the one and only radio station calling ourselves the KISS Army. One of the guys, Rob Smith, actually mass-produced a school-made KISS t-shirt that we would wear to school despite the jokes we’d get about the band’s lack of air time. Jay found out that it was the radio station’sprogram director who didn’t like the band so we directed our playful threats towards him. He’d try to make us mad by playing “Love Theme from KISS” before a station break just to appease us. Other times he’d play a cut like Strutter, but NOT tell the audience the name of the group. This was all intentional to keep us riled up no less.

Five months later Jay and our KISS friends started college in the fall. I was unemployed with little direction. KISS Alive had just come out and KISS announced they were coming to Terre Haute in two months. Now we had many top acts pass through our city since it was a college town. Aerosmith, the Doobie Brothers, and Chicago to name a few, but only Elvis Presley was able to sell our new arena out.

The program director, who we feuded with, asked me to bring my KISS albums by the station since he had trashed the ones Casablanca gave them. KISS Alive was starting to get some serious airplay and the radio dj’s would play a song and dedicate it to “the KISS Army.” At this time Jay and the others continued to call in as well. The program director asked me to write a “KISS Army Letter of the Day” similar to what we were writing during the summer. This would be for two weeks leading up to the November concert. I agreed and used my bully pulpit to proclaim KISS as Gods and put down all other acts including the Beatles. Eventually the concert sold out and when the people at Aucoin Management asked the radio station why KISS had sold out, while other acts with MORE airplay had not, they told them about The KISS Army Letter of the Day and how we had been attacking the radio as a group for several months. They contacted me on my birthday to tell me they wanted to start a national KISS Army….in Terre Haute no less with me running it. I have the letter to prove it. Of course that’s another story.

Do you remember the first time you saw Kiss? And what was your first impression of seeing these masked superheroes?

I thought they were some English glitter rock cult band. I saw them before I ever heard the first album. It was a shock for most any normal person in the mid 70’s compared to what else was out there. I didn’t make any super hero connection though.

Which band member did you relate to the most?

BEFORE I met the band I was a huge Ace fan since he played lead guitar. I couldn’t relate to flashy Paul or Demon Gene. Oddly enough to this day, I still never met Ace. He was never around. Of course Gene and Paul picked up the slack and were most appreciative.

What is your favorite Kiss albums, and why?

If I had to pick the one it would have to be ALIVE. It was special because it let fans hear why the band’s live shows were so special, something that the three studio albums didn’t do for many. It showed that KISS had finally arrived. The first album I still enjoy, Destroyer and Revenge all stand out to me too.

Hanging out with the band back in the 70’s, did you ever get to see theband without makeup?

That was like a religious experience. They went to great lengths to conceal their identities which made the mystique even better back then. You felt privileged to be able to hang with them without the makeup but you couldn’t take pictures to show your friends where you’d been over the weekend.

Do you have any good backstage stories you can share with us?

There was one time where we were sitting around a table in the back room of a pizza parlor asking Gene and Paul dumb questions like, “What’s the second line in Deuce?” They were cool about us young star-struck kids. Another time in Evansville Gene was doing an interview for our local radio station as a favor to me. He embarrassed me by showing me his “portfolio” of brazen hussies. We were watching James Brown on the Midnite Special and Gene was eating a club sandwich and drinking a Fresca. He was always great about making sure I was fed whenever I’d travel to see them in some city. I laugh about that stuff today. Now people pay good money for half the experience.

Fast forward to 1983, what did you think about Kiss’ decision to take off the illustrious makeup?