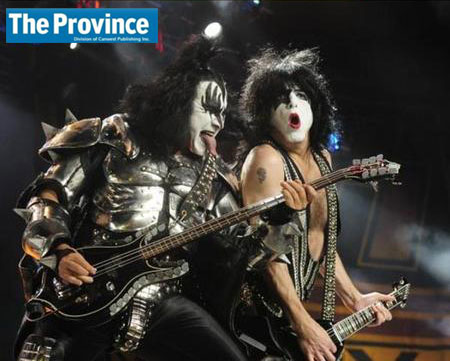 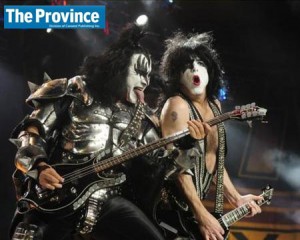 Well, if you’ve ever seen the episode of Family Guy where Peter Griffin dresses up in full Gene Simmons regalia, you’re not far from getting the picture. Fun-loving dudes willing to go out swilling with their fave KISS character’s face painted on, many in improvised costumes of the Starchild, the Demon, the Spaceman and the Catman. The same ones who did it in their teens.

And some really-into-it wives, girlfriends and dancers in the front row, centre stage.

I’d love to hear back how many hangovers are out there tomorrow. Because this crowd came to party hearty!

For those inside, it was KISS’ Alive! album unfolding in full pyrotechnical splendour.

From the opening chords of ”Deuce,” it was a trip through nostalgia until after ”Calling Dr. Love.” Then Stanley went into carnival-hawker mode and pushed the band’s new Sonic Boom album and the single ”Modern Day Delilah.” The new tune is certainly classically KISS.

Fans wanted the best, they were getting the best. At least as KISS has always delivered it.

Following it up with ”Do You Love Me?” from Destroyer was genius. This is one of those sing-along arena anthems that this group excels at. And they always had enough of them to rub wienies with every other crotch-rocking crew from back in the day.

It’s the secret to the enduring nature of the band’s brand and, as long as it can keep penning crowd chorus-ready rockers such as ”Say Yeah” its fans will keep coming back for another KISS-off. It’s the ”Keep it simple, stupid” formula that has made the members millions in the last four decades.

In olden days, Simmons’ blood-spewing routine didn’t include him flying to the lighting rig. Now it does. After his starring role as the demon with a tummyache came another one of the group’s finest moments.

”Black Diamond” is the only KISS tune to ever fete indie rock cred via the Replacements cover of the tune. It had the house freaking right out.

The closer was the megahit ”Rock ’n’ Roll All Night” and the guys did everything possible to knock it out of the park — I’d be surprised if there is that much confetti at an Olympics ceremony. Plus the cannons, fire, sparks and super-tall pneumatic platforms that elevated Simmons and Thayer far above the crowd.

A moment to catch its breath and the band was back for what Stanley promised would be ”the longest encore ever.”

A personal fave, ”Shout It Out Loud” came next and it was awesome. I suppose the 1983 hit ”Lick It Up” was good too, if for no other reason that it proved the band could hold its own with any of the Sunset Strip’s hair farmers in that grim musical era. The snippet of The Who’s ”Won’t Get Fooled Again” in the song was, what, hopeful?

Stanley hopped a ride across the arena on a wire to perform ”Love Gun.” At this point the show was past the two-hour mark. What else were they going to give us? 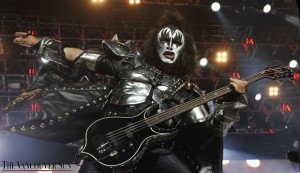 Dear KISS Army: Before we get into my review of Saturday night’s show at GM Place, there are a few things you should know about me.

I clearly have no musical taste, whatsoever.

And I am most certainly a sad, pathetic man who doesn’t understand that sales approaching 100-million albums automatically makes a band awesome.

Now hold onto your hairspray and kick up those glittery high-heeled boots: you might want to sit back down in your makeup chairs for this one.

Led by the brilliant marketing brain that resides somewhere beneath Gene Simmons’ overly coiffed black hair, KISS has, over the decades, built itself into a major brand.

Knowing Simmons, that shouldn’t be surprising. After all, in his terribly scripted and stilted “reality” show, Family Jewels, there’s rarely a scene where Gene doesn’t see green.

But, trademarks aside, perhaps the band could have made more of an effort at building credibility through its music, rather than making sure every baby in the world has a KISS bib on while mommy goes online and writes a nasty letter to that mean critic who said KISS wasn’t very good.

”This writer is such a hack…”

Okay, so KISS isn’t all suck. But there’s a whack of it.

Still, inexplicably, I was feeling quite optimistic as I entered GM Place on this cold, rainy night. In hindsight, mainly because I hadn’t seen the show yet.

Entertaining? Sure. Like a circus, but with less cruelty to animals — though I wonder if the band’s makeup gets tested on them or not.

A note about adult face painting: unless you are a clown, a member of a 70’s-era glam-rock band, or both, it’s not recommended.

Fittingly, the boys started at the foundation of their careers, kicking off the show with Deuce, a track from the band’s self-titled debut in 1974.

Sure, the guys stormed the stage 20 minutes late, but, hell, look at those outfits.

KISS wasn’t built in a day.

During Strutter, also from the debut album, I saw two things I haven’t seen in a while: giant flame-throwers spitting fire 30-feet into the air (hot); and an aging bassist (Simmons) performing alternating hip-thrusts with guitarist Tommy Thayer (not so hot).

Also on a flaming note: video of the band playing live superimposed over fire wasn’t quite heated enough to melt the cheese from said production value.

Nothing was shocking and not in a good way by the time Thayer took over vocal duties during the mindless Shock Me.

Here is a band – really, Simmons and Stanley – that has gotten rich from whoring its name onto every conceivable product, and the new album, Sonic Boom, proves that, while the band stopped progressing musically long ago, the brand continues to gather momentum.

Still, things almost ground to a halt mid-set, when, during a Thayer guitar solo, one of the stage explosions blew a set of lights from the rigging above, sending them crashing to the stage below.

Luckily, Thayer wasn’t nearby: it most certainly would have been light’s out for him.

Of course, as mountain climbers will tell you, soloing can be dangerous.

Just ask drummer Eric Singer, whose kit slowly rotated horizontally to face each side of the stadium during his solo. This would have been cool, say, if it were 1986 and I hadn’t yet seen Tommy Lee play while rotating completely upside down during Motley Crue’s Girls, Girls, Girls tour circa 1987.

Speaking of flying musicians, Simmons, aided of course by cables and not his costume’s bat wings, rose up to the rigging like a levitating bass god to sing I Love It Loud.

So, yeah, I could tell you that the band finished off with Rock and Roll All Nite, shot confetti onto the crowd then did a four-song encore to wrap things up.

But how do you top a flying 60 year old?

Truth be told, I’m glad KISS is still around after all these years. I just wish the guys had more good music to show for it.

Then, maybe, I wouldn’t think they’re such hacks.

And, you know, it takes one to know one.¨ 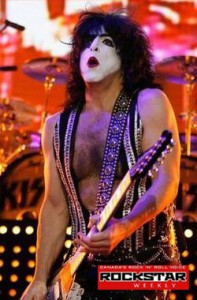 The KISS Alive 35 Tour rolled into Vancouver last night to a sold-out crowd at GM Place with a setlist packed with more than two hours of classic tracks. Complete with an arsenal of flash pods, pyro, lighting rigs and plenty of fire, Gene Simmons, Paul Stanley, Eric Singer and Tommy Thayer took to the stage giving Vancouver its most explosive show of the year.

With a majority of classic songs in the set, the band tore through such notable tunes as Deuce, Strutter, Let Me Go Rock N’ Roll and Hotter Than Hell – and that was only the opening of the show. Each member of the band had a chance to sing at least one song as drummer Eric Singer took on the Peter Criss vocal for Black Diamond, while Tommy Thayer sang the Ace Frehley classic Shock Me.

The addition of Singer on drums and Thayer on guitar has given KISS a new sound and a newly found energy – both of them are great musicians and showmen and they make Simmons and Stanley sound all that much better. This was the best and tightest sounding the band has been since the Revenge era. To me, nothing has ever sounded as good as the club tour the band did to prepare for the Revenge tour – like the one I saw in Toronto in May 1992 – but this was close.

With only two songs played from the new Sonic Boom CD there was plenty of room for some KISS standards, although Modern Day Delilah is a great new song that fits in well. The other new track, Say Yeah, came across like a true concert favourite and was welcomed by the fans as much as Do You Love Me? – which was performed for the first time on the Alice 35 tour tonight.

The event was a slick visual assault with vibrant colors of lights constantly flashing and even some green and orange flames rising from the ground on occasion. There was one faux pas. During Thayer’s guitar solo, one of the special effects accidentally blew a set of lights from an overhead rig and sent them crashing to the stage. Luckily Thayer was at the other end of the stage when that happened. This is the second overhead lighting problem in a week . In Winnipeg, one of the overhead lights caught fire, delaying the show and forcing the band to break out in an impromptu jam of Firehouse.

It would be really hard to say KISS has come up with anything incredibly new or unseen on this tour because, quite frankly, they invented everything that you’d already see in a modern rock show anyway. There was lots of pyro and fire, the drums and band members rose to the rafters on hydraulic platforms, Gene Simmons was lifted in the air to the lighting rig to sing I Love It Loud, and Paul Stanley rode a swing-like device from the stage across the audience to sing Love Gun at the other end of the arena. There really wasn’t much more anyone could ask for.

If this was any other band on that stage, we would have been shocked and the news headlines the next day would have read that this new band was the next big thing. But for KISS we expect and demand this level of entertainment. And you know what, they delivered.

Just ask the fans who were excited from the get-go. Many dressed up as their favourite KISS superhero, while others pounded their fists in the air or sang along for the entire two hours. There was one family on the floor who had all four of their children dressed up in full costumes. Some fans even scrambled to get a photo or autograph from Gene Simmons’ companion Shannon Tweed, who was on hand at the show.

With the exception of not hearing I Was Made For Lovin’ You and God Gave Rock And Roll To You II, which have been missing from the whole tour, it was an incredible show and an unforgettable night.

Vancouver wanted the best and Vancouver got it.