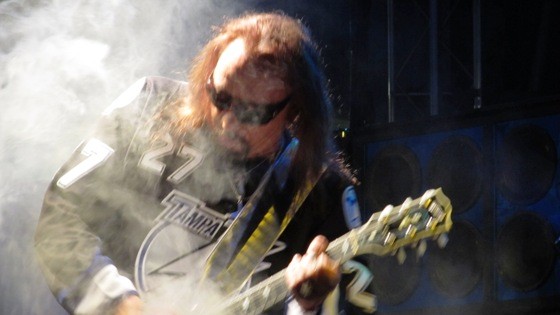 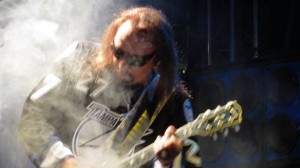 The Tampa Bay Lightning couldn’t overcome a 2-1 deficit inside the St Pete Times Forum on Friday evening, but rocker Ace Frehley and his band jammed outside to exhilarate the crowd after the disappointing loss to the Ottawa Senators.

An evening of Hockey plus Rock & Roll equals euphoria. The St Pete Times Forum’s idea of mixing the both for one gratifying evening was pure genius. A-Rod and Cameron Diaz even watched from one of the suites.

When the near capacity crowd exited the arena, Ex-KISS rock and roll hero ’Space Ace’ Frehley electrified the audience with several big-league guitar solos on his Gibson Les Paul.

Ace wore his favorite number 27 on a Tampa Bay Lightning jersey with his name embedded on the back and wore dark shades throughout the concert. While Ace played and sang he consistently bombarded the crowd with his Guitar Picks.

Frehley astonished the huge Tampa Bay Lightning crowd with his own musical triumphs and songs that he recorded with his old band mates. It was great to see Ace! KISS will never be the same band without him. It was always Ace Frehley’s guitar solos and stage presence that made KISS a credible band and not just a visual rock extravaganza. And I’ve witnessed KISS shows since 1975 when Rush supported them and ticket prices were only $5.50.

Some of the heavy driven rock tunes belted out by Ace and his band Friday evening were ”Snowblind” and ”New York Groove” from his first solo album in 1978. All the KISS members released solo efforts that year but Frehley’s album outsold his three band mates.

Ace played ”Sister” from his latest venture – Anomaly and ”Rock Soldiers” from the album Frehley’s Comet.Ace Frehley reminded the Tampa crowd that he was almost electrocuted in Lakeland at the Civic Center in 1976, then immediately jumped into his tune ”Shock Me” a song both written and sung by Ace on the KISS Love Gun album in 1977.

The ’Spaceman’ launched his old bag of tricks when his electric guitar discharged flames and smoke. The haze encircled the ’rocketeer rocker’ during one of many impressive guitar solos.

Ace banged out KISS favorites ”Love Gun,” along with ”Deuce” featuring the choreographed – head bobbing – guitar swaying strut that KISS fans always anticipated during the peak of the song. The concert concluded with ”Cold Gin” from the inaugural KISS album.