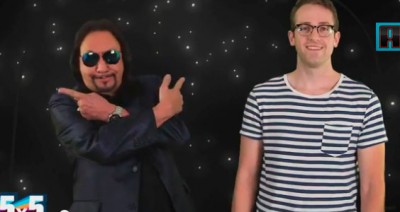 If you want to record a video-game show about the greatest spacemen in gaming history, who better to have as your special guest than Ace Frehley?

Actually, in retrospect, the guys at Arcade Sushi probably could have gotten more in-depth responses from someone other than the former Kiss guitarist, who spends a substantial portion of the above four-minute clip making his trademark squawking noise. But in his defense, we don’t see Ace as a hardcore gamer, and either way, if you’ve been waiting since ‘Phantom of the Park‘ for your chance to see him mix it up with low-budget special effects, then you definitely don’t want to miss this.

Of course, as one of the hosts jokes partway through, the whole thing is an opportunity for Frehley to promote his new album, ‘Space Invader,’ which is out now. He’s been hitting the promotional trail hard lately, showing up on ‘The Tonight Show’ (where he performed ‘New York Groove‘ with the Roots) and sharing Frehley-style wisdom in a variety of far-flung locations.

Frehley also looks likely to stay busy for the foreseeable future, having already announced that his follow-up to the ‘Space Invader’ album will be a set of cover songs that he hopes to release as early as next year.