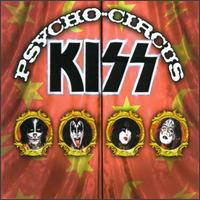 The hardest part for me in writing for an album is writing the first song, coming to grips with it thematically and finding out the direction for the album. It becomes the signature piece. ”Psycho Circus” was me wanting to create the power and atmosphere that i thought Destroyer had. When i went in to do the demo i called Bob Ezrin and asked him if he would go in with me because Bob had originally been slated to produce that album. We very, very much wanted himto do it. We were very disappointed when he couldn´t because of his time commitments. I called him and asked him if he would help with the demo and he couldn´t. While i was in the studio working, most of the time all i was thinking was, ”What would Bob do?”. When i finished it and played it in the car to Bob, he had this big smile on his face. When it was done i said to him, ”All i was trying to figure out is what you would have done.” He smiled and said, You did it.”

Källa:KISS- Behind The Mask by David Leaf & Ken Sharp