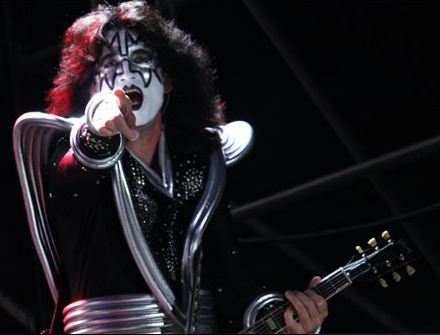 1. What’s the latest news on the Hottest Band In The World?

2. On SONIC BOOM? How did you generally approach writing your solos?

TT: Some solos I worked out on my own, on others Paul helped me with direction. I usually had an idea where I was going to go with each solo before we recorded them.

4. How did it feel to do the lead vocal on ”When Lightning Strikes?” & was this written specifically with your voice in mind?

TT: Yes it was. I wrote the song with some help from Paul. We wanted a straight ahead rocker and I think it came out great.

5. With KISS guitar solos generally being pentatonic based, how do you feel other modes fit/or don’t fit within the context of KISS’ music?

TT: The KISS style and sound is timeless and was established early on. It’s a blues-based hard rock style. It is what it is.

TT: I think it was one of those things we didn’t plan the first couple times, and then eventually it became a part of the show.

7. ”Lick It Up” has some interesting elements live, how did the current arrangement come together, with the segment from ’We Don’t Get Fooled Again’?

TT: I think originally I was doing that finger-plucking thing and Paul was singing ”I Want You.. I Need You” Later on that evolved into the Who part. I really like that.

8. How did the idea for new costumes come about?

TT: We were flying on our jet to Milwaukee for a one-off gig last year and we were talking about that we needed to get started on new KISS outfits. Paul picked up a pad of paper first and started sketching some ideas. We all tweeked things a bit.

9. Can you tell us a bit about your Hughes & Kettner signature amp?

TT: The HK Tommy Thayer Signature amp has a warm ballsy, in-your-face tone that really works well. I’d recommend it to anyone that wants a serious guitar amp. They look good too!

10. Any set list surprises planned for the European leg of the Sonic Boom tour?

TT: There will be some new songs and other great stuff. Always taking it to another level! We can’t wait!