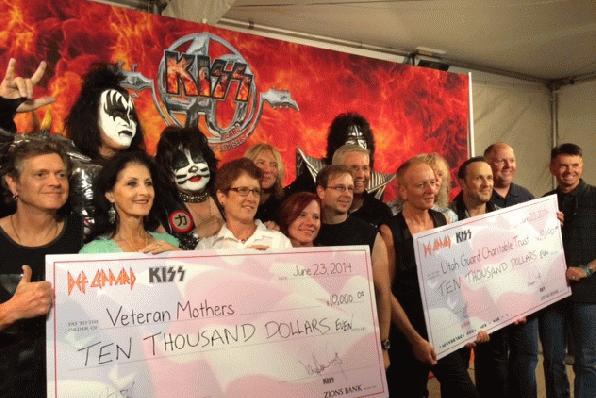 (KUTV) Thousands of KISS and Def Leppard fans packed USANA Amphitheater Monday night, as they kicked off their summer concert series together in Utah.

It was a rock ’n roll party for the sold-out crowd, but for two lucky military veterans, it was a dream come true.

”Def Leppard has been a huge influence on my life since ’87, ’88 when Hysteria came out,” said Bob Jones, a retired Army Chinook helicopter pilot, who served tours in Afghanistan.

Jones, from Clarksville Tennessee, was one of thousands of military veterans that applied for a nationwide search, to become a roadie for the tour. He was announced as the contest winner between performances from Def Leppard as KISS.

A former Marine from Long Island, New York, Kayla Kelly, was also announced as a contest winner. Kelly was a communications specialist that served in Iraq and Afghanistan.

”We set up for the acoustic show, the pictures, the autographs and then we tear all that down,” says Kelly, who admits being a roadie is hard work, not just fun and partying.

”It’s an honor to be able to present this opportunity for other employers to hire veterans,” says Jones.

Organizers also presented donations for $10,000 to Utah National Guard Charitable Trust and to the Community Foundation of Utah.