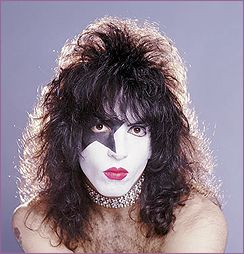 Paul Stanley is the last member of the original Kiss lineup to pen a memoir, but his upcoming book Face The Music: A Life Exposed is still an essential read for all fans of the pioneering hard rock band. For the first time ever, the Starchild reveals that he was born with one ear, causing horrendous emotional pain. He also gets into great detail about the wild early days of Kiss, his battles with all three original members of the band and how he carried the group all through the 1980s while longtime partner Gene Simmons was largely engaged with other projects. In this exclusive excerpt — which comes alongside the band’s first-ever appearance on Rolling Stone’s cover — Stanley gives his side of the tumultuous Kiss ”Farewell Tour” in 2000.

Peter posted a sign every day counting down the number of days left on the Farewell Tour. He started painting a teardrop below his eye. I thought it made him look like Emmett Kelly’s famous Weary Willie character, the tragic clown who toured with the Ringling Bros. and Barnum & Bailey Circus. And as for the rest of his makeup, it was as if he had forgotten how to do it. He started to look like a panda bear, with big rectangles around his eyes.

The tour was horrible. Constant drudgery and misery. We spent all of our energy trying to coax Peter and Ace out of their hotel rooms. Ace sucker-punched Tommy at one of the shows. Peter had his usual handbook detailing how hotel staff had to treat him and which windows had to be covered with tinfoil and all that. There was no reasoning with either of them. We never knew if we’d make it to a show on time, and once we got onstage we never knew whether we’d get through the show. I mean, if a guy has trouble putting on his makeup, how is he going to play? Not surprisingly, the shows could be pretty awful.

I was angry at Peter and Ace for being disrespectful toward everything we had accomplished and everything the fans were giving us. I bought into the idea that this really was it. The end of Kiss. There was no place to go. it was unbearable.

We were stuck in a rut musically as well – basically playing the same 17 songs we’d taught them for the initial reunion. This was the third tour with the same set list. Peter and Ace just couldn’t master any more. The needle was already into the red. I had to come up with nonsensical interview responses to questions about why we were playing the same songs. I couldn’t just say, ”because Peter and Ace can’t learn any others.”

One night during a show Doc McGhee tried to get my attention from the side of the stage, gesturing up at me and holding his nose.

”You stink!” he yelled. I walked over to him during a break between songs. ”What did you say?”

”You stink!” he repeated. ”Fucking Peter is playing too slow,” I told him. Doc ran around behind the drum riser and started making the same gesture at Peter. ”Peter, you’re playing too slow!” ”Well, so are they!” Peter shouted back. ”What are you talking about?” Doc screamed. ”You’re the fucking drummer!” Another night Peter had a new problem. He stopped playing in the middle of a song and just held his sticks up and looked at me like a deer in the headlights. I yelled, ”Play!” and started tapping my foot so at least he would start hitting the drums again. That happened on more than one occasion.

A well-known musician – who had seen the band many times – approached me one night and said, ”I can’t come to any more shows. It’s just too painful to listen to.”

The worst feeling was reading reviews trashing the shows and thinking, ”That’s spot on.” It was such a shame because the band could have been great and wasn’t. The drama offstage and the hostility and resentment and backstabbing was taking a heavy musical toll. And then there were the drugs. When Ace had an off night and made a lot of mistakes, we would joke that his mixture was off.

It would have been great to go out in a blaze of musical glory; instead, we were dragging our asses. At one point we put aside a few days to brush up on songs and tighten things up. Ace didn’t show for one of the rehearsals. He said he wasn’t feeling well because he had Lyme disease – an illness brought on by the bite of a deer tick. Peter, brainiac that he is, said, ”That’s bullshit! He was never bitten by a deer!”

Am I living in an insane asylum?

On August 11, 2000, we had a show in Irvine, California, after a week off. Ace had spent the week in New York. We had a rule that if anyone was going to fly cross-country on a commercial flight to get to a gig, he had to get there a day in advance – just to be safe, in case there was a storm or a mechanical issue or whatever. We didn’t want to have to cancel shows.

The day before the Irvine show, Tommy had arranged for a limo to pick Ace up and take him to his flight. He always had the limo show up hours early because it was the same chore to get Ace out of his house as it was to get him out of a hotel. Then all of us sat around waiting for updates on Ace’s progress. Ace’s pickup was schedule for noon East Coast time.

”Ace, you have to get in the car – you’re going to miss your flight.”

”There’s a problem . . . uh . . . and i’m sick . . .” Millions of excuses. They kept rescheduling Ace on later and later flights. The limo went back each time. it got to be 7 and then 8 P.M. ”Passenger has not left his house, sir,” reported the limo driver each time.

Tommy managed to get Ace on the phone again. ”There’s one more flight out tonight, last one.”

But again at the appointed time, nothing happened. ”Passenger still not out of house, sir.”

The next day was the show. Ace started the day on the other side of the country. By some minor miracle, however, he made it to the airport in the morning, was met by the on-site rep, and was escorted onto his plane.

Traffic from LAX airport to the venue was going to present a serious problem. So we arranged for a helicopter to sit at Terminal 4, where Ace was arriving, and shuttle him to the venue by air. That way he could probably make it in time for the concert.

Then we got a call. ”Well, there’s good news and bad news.”

”The good news is that Ace really is on the plane. The bad news is that the plane has a mechanical problem and is delayed.” At that point Doc told Tommy to drop what he was doing and get to the venue. He was going to have to play the show.

We traveled with a Spaceman outfit custom-fitted to Tommy – as an insurance policy. A brand new outfit, boots and all, tailored to Tommy always came along in one of the wardrobe crates. We knew Tommy could do it, but he had never actually done it.

Tommy got made up and dressed. And meanwhile we were geting updates on Ace’s location as the start time of the show approached. He’s landed . . . passenger is in helicopter . . . 50 miles away. . .

Ace walked into the dressing room about 20 minutes before the show was scheduled to start. He looked at Tommy – fully dressed and made up, with his guitar on, ready to go – and just said, ”Oh, hey Tommy, how you doin’?”

We delayed the show an hour, Ace got into his makeup, and we played the concert.

The fact that we traveled with a costume for Tommy didn’t seem to faze Ace. He thought it was a ploy – something between a joke and an empty threat. But we were 100 percent ready to go on with Tommy. We didn’t have him suit up to teach Ace a lesson; we did it because we had a concert to play. The same reckless behavior that had led to a decades-long downward spiral was threatening to sink the ship. Here was a life preserver.

Still, Ace continued to think and act like he was irreplaceable. He continued to show total disregard for everyone else, continued to act as if we were blessed to have him. He congratulated himself on making it to the show.

”This will not do,” Doc said to me and Gene. ”These guys are just terrible. I run a management company, not the Red Cross. They don’t send me into destroyed countries to rebuild things. I don’t save people. You have to make changes.”​

From the forthcoming book Face The Music: A Life Exposed by Paul Stanley. Copyright © 2014 by Paul Stanley. To be published on April 8,2014 byHarperOne, an imprint of HarperCollins Publishers.
Read more: http://www.rollingstone.com/music/news/how-kiss-reunion-almost-fell-apart-preview-paul-stanleys-memoir-20140331#ixzz2xbkQzWcv Follow us: @rollingstone on Twitter | RollingStone on Facebook