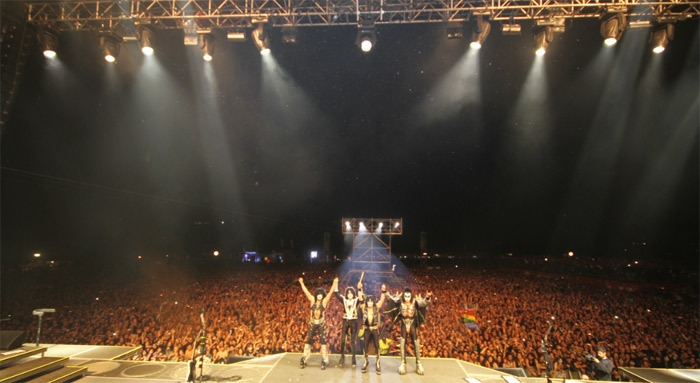 You can never accuse Kiss of not putting on an over-the-top rock show. But for the upcoming European leg of their ‘Monster’ tour, the band are unveiling a new stage setup that they promise is a step beyond even their previous stadium spectaculars.

“It’s really great,” Paul Stanley tells VH1 Radio Network’s Dave Basner (quote via Blabbermouth). “You know, for so many years, we’ve talked about a new stage show and basically what we’ve been doing has been an extension of the old stage show. So people would sometimes come and, obviously, the band does a great show and it’s great to be there, but some people would say, ‘Gee, it doesn’t look that different.’ This is a completely different stage, it follows a really great theme, the lights are like nothing you’ve ever seen before.”

Gene Simmons recently shared some details about the upcoming shows in a Q&A session with a group of fans, revealing that the new stage includes a giant spider that shoots fireballs out of its tentacles.

“This spider is just beyond anything you’ve seen,” he raved. “It’ll be able to be flat and come up and walk almost to the front of the stage. It’s the most amazing thing I’ve ever seen.”

The new stage will also feature a 70-foot screen, and it’s not just the stage that’s more dynamic. Simmons says the musicians are pushing their limits, too. “We’re gonna levitate and go 30 rows into the audience,” he says. “Oh — and play songs! It’ll be the best tour yet, you’ll see.”

Kiss are slated to kick off the European leg of their 2013 summer tour on June 1 in Stockholm, Sweden. They will return to the U.S. for a string of four dates in August.