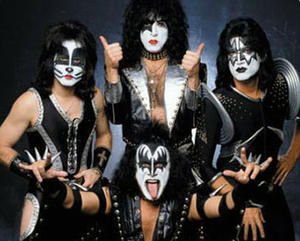 Here is where my story with Kiss began. I was in the seventh grade and was a young hell-raising thrash kid into Megadeth, Testament, Anthrax, Overkill and Metallica.

One day my best friend had a Hit Parader magazine that he brought to school, and he said, “Dave, check these dudes out.” When I saw Kiss on the cover, they had that whole ”Japanese Kabuki meets outer-space warrior” vibe to them, and as a 12- or 13-year-old kid, I thought they ruled instantly. I didn’t even really care what kind of music they played or if they even played music at all. I was hooked.

To me, Kiss is the most underrated band of all time. I know some of you out there reading this are saying, WHAT!?!?! But here goes.

When I talk music, I always bring up Kiss because, pound for pound, they are probably my favorite band of all time. It’s a toss-up between them and Megadeth. But from a lot of people what I hear is, “Oh man, I could just never get into Kiss.” I really feel like a lot of people are missing out on the greatness they have to offer.

Some say they sold out because of their vast product line, or they say they are not great musicians or whatever, but you just can’t argue with their incredible live show, and the songs are just unbelievable. I just don’t think they get the respect they deserve as songwriters. They have hooks for days, those big over-the-top choruses that hit you like a ton of bricks. That’s what has set them apart from other bands: They have memorable songs that stand the test of time.

To thrive and to still be hugely relevant in the music business for almost 40 years is pretty much unheard of. Yet Rolling Stone has barely acknowledged their existence, and they are still not in the Rock and Roll Hall Of Fame after a decade of being eligible.

If they were good enough for Dimebag Darrell to love them, then hey, who can argue with that?

I already loved the band’s image, but they blew me away musically with Kiss Unplugged. It’s an absolutely amazing live record. The musicianship they showed in that performance was incredible. Paul and Gene are both spot on with the vocals, the band is firing on all cylinders and Bruce Kulick’s wailing acoustic guitar solos made me a huge fan instantly. I loved it. After hearing that record, I had to own every song the band had ever done. I quickly learned that their back catalog was equally impressive, spanning tons of genres and vibes.

I saw Kiss for the first time when I was around 16. I took a couple of friends with me to see them in concert in Columbus, Ohio. Ted Nugent and Skid Row were opening up for them on “The Farewell Tour.”

I remember my friends came along just to get away from our boring little small town. They poked fun at Kiss during the whole car ride there, saying things like “Kiss is dinosaur rock” and making fun of Paul’s legendary in-between song banter.

But when the band fired up and the 100-foot drum risers came out and the fireworks started popping and the pyro blazed, they melted away into a couple of 10-year-old kids. I had a good laugh because when the show ended, the same guys who were talking smack on Kiss were now like, ”Oh dude, I need to buy a shirt” and “I’m getting Peter Criss’ signature drum sticks.” I will never forget it. It was one of the best shows I’d ever seen. The truth is I say that after every Kiss show I go to.

I actually just got back from seeing them last night in Manchester, New Hampshire. The great ones ripped the roof off of the place. If you haven’t seen them yet, go see them. You wont regret it. It’s a blast.

Before I go, everyone knows “Rock and Roll All Nite,” but I feel with those best-of collections, you are never truly getting “the real best of” stuff. So here goes: These are the Kiss songs I feel are “must own” songs. Every rock fan should check them out.

This comes off of Unmasked originally, but this version is awesome. It has the Melbourne Symphony Orchestra backing them up. It is a truly great song.

“I Will Be There,” from Carnival Of Souls

I don’t know who wrote the lyrics, but it’s a message to one of their kids and it is really heart felt. I love the whole Led Zeppelin-esque instrumentation that is going on as well. Very cool tune.

“I Still Love You,” from KISS Unplugged

This is a really well-written song and on this version Bruce Kulick makes the acoustic guitar sing like very few have ever done. Also Paul turns in an unbelievable vocal performance here holding one note out for what seems like ten minutes. Another favorite for me on this one is “Sure Know Something.”

First off, let me say that “Revenge” is a killer record and one of the band’s finest hours, but I put this one on here, which isn’t even a song but a band jam, just because Eric Carr was such a monster drummer and newer generations of drummers need to study this guy. He was the real deal.

“Shout It Out Loud,” from You Wanted The Best You Got The Best

This is one of my favorite songs ever. This always puts me in a good mood. It’s such a rock anthem. And on this version no one captures that live concert feel on record quite like KISS. Also check out “I Stole Your Love” from this CD.

“King Of The Mountain,” from Asylum

I love the drum intro on this one, and it’s just a cool song. “I’m Alive” from this record also rules.

This album leaned super heavy toward disco, which lost Kiss a lot of fans at the time, but this record has stood the test of time and is now a favorite amongst fans. “Dirty Livin” rocks, and Peter Criss has a really good voice on it. I love the whole vibe of it. “Magic Touch” is another classic off of that record.

“Under The Rose,” from The Elder

I heard this song for the first time about a year ago when I stayed up all night in my new home unpacking. I had my iPod on shuffle and this track came on. I felt like I was on some weird drug just hearing it. I am totally clean and sober but when I heard this, I was like “WHAT”!!!! I Love this album though. It takes a few listens to get into and then you’re hooked. “The Oath,” “A World Without Heroes” and ”Mr. Blackwell” are all classics from this record.

“Exciter,” from Lick It Up

Great song. I like the tone of the whole album. It takes me right back to the ’80s. “Young and Wasted” is worth checking out as well, and of course “Lick It Up,” which is a live staple for them. Last night everyone in my section kept screaming for them to play “Lick It Up,” and when they did the place went insane.

“Nowhere To Run,” from Kiss Gold

A hidden gem almost no one knows about.

I loved the Sonic Boom album; there are a lot of cool songs on that one. This one stands out because that Beatles and Mott The Hoople influence is very evident here and I love the chorus. It reminds me of “All The Young Dudes.” The harmony vocal part after the guitar solo is great and reminds me a lot of the harmony part in “God Gave Rock and Roll To You,” another Kiss must-have.

“King Of The Night Time World,” from Alive IV

This song rules, plain and simple. A fun fact on this song is it was co-written by the manager of The Runaways’ Kim Fowley. The same dude who co wrote “Do You Love Me.” Kiss has always brought in various co-writers like Bryan Adams on “Rock and Roll Hell” or Michael Bolton on “Forever.” Yes that Michael Bolton, and yes, that Bryan Adams.

“Strange Ways,” from Hotter Than Hell

Kiss does a cool job on this, but check out the Megadeth version from the “Warchest” box set. It’s awesome.

“I’ve Had Enough (Into The Fire),” from Animalize

“Saint And Sinner” and “War Machine,” from Creatures Of The Night

These rock! Also the version of “Creatures Of The Night” from the Alive III record is awesome. It also totally captures the live Kiss experience on record.

“Burning Up With Fever” and “True Confessions,” from the Kiss Gene Simmons solo album.

“Raise Your Glasses,” from Psycho Circus

“I Want You,” from Rock And Roll Over

Amazing song. For me it really sums up what made the ’70s-era Kiss so great.

“Black Diamond,” from Kiss My Ass

This is the tribute album version by Yoshiki. The Kiss version, of course, is amazing, but this one is so cool. I urge people to check it out. It’s a beautifully arranged epic classical version.

Dave Reffett is a Berklee College of Music graduate and has worked with some of the best players in rock and metal. He is an instructor at (and the head of) the Hard Rock and Heavy Metal department at The Real School of Music in the metro Boston area. He also is a master clinician and a highly-in-demand private guitar teacher. He teaches lessons in person and worldwide via Skype. As an artist and performer, he is working on some soon-to-be-revealed high-profile projects with A-list players in rock and metal. In 2009, he formed the musical project Shredding The Envelope and released the critically acclaimed album The Call Of The Flames. Dave also is an official artist endorsee for companies like Seymour Duncan, Gibson, Eminence and Esoterik Guitars, which in 2011 released a Dave Reffett signature model guitar, the DR-1. Dave has worked in the past at Sanctuary Records and Virgin Records, where he promoting acts like The Rolling Stones, Janet Jackson, Korn and Meat Loaf.