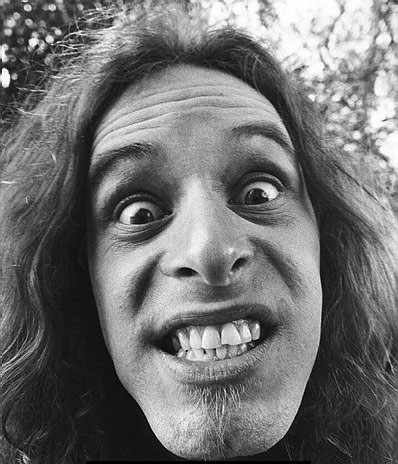 From: GuitarWorld.com, by Bob Grossweiner

Here’s a Ted Nugent interview from the March 1987 issue of Guitar World, which featured Steve Vai and Billy Sheehan on the cover. The original story by Bob Grossweiner started on page 74 and ran with the headline, ”Terrible Ted Rates The Players: If there’s one thing Ted Nugent likes more than playing guitar, it’s talking. Just listen to this …”

Ted Nugent is the first to admit that his career has had its ups and downs since the turn of the decade, which he attributes to poor management and overexposure.

So the Nuge started to manage himself and switched record labels and booking agencies to get his career back on track. And while he was recording his most recent album, Little Miss Dangerous, he got a call from Bill Conti to work on the sci-fi movie Nomads starring Pierce Brosnan, Lesley Ann Downe and Adam Ant.

Nugent is obviously more animated than the movie, which never caught on with the public -� the soundtrack album was never released.

”The feedback, the dive bombers, the explosions, the rhythms, the aggressions — all the good things,” he enthuses. ”It elevated me, inflated my feedback — it was my typical bombastic approach. Conti boosted me. He has the computer mayhem. My inherent gut-level elements of 10 years of rock ’n’ roll is on the score — the aggressive, the audacity, the sonic warfare elements.”

The Motor City Madman has put his Les Paul Fusion, Gibson Byrdland and ’59 Les Pauls to rest and is now exclusively using Paul Reed Smith Wonder guitars he helped design — he even provided the maple from his Michigan property.

”The instrument is magic,” he says with a smile. ”It sounds like a Black & Decker guitar. It has one of the finest tremolo systems in the world. I contoured the back to fit my body. It has a trim neck with width and depth and tall aggressive frets. It’s a special guitar in the feel, touch, sound, dynamics and sonic dimensions.”

Nugent plugs into Marshalls ”With everything except volume at about a half up.” He also has Fender amps with Celestion bottoms and JBL speakers, and a Sunn Penetrator amp (not marketed yet). He uses a stereo chorus and a little DDL for effects. Nugent also plays Guild and Fender basses.

”The caliber of guitar playing today,” he says as a preface to the rating of the ax players, ”is beyond scope. People accept an earth-shattering guitar solo as a good guitar solo. When Neal Schon does a solo at the end of a Journey song, it’s acknowledged as a nice bridge when, in fact, he has come close to reversing the axis of the earth in doing such a brilliant guitar solo.”