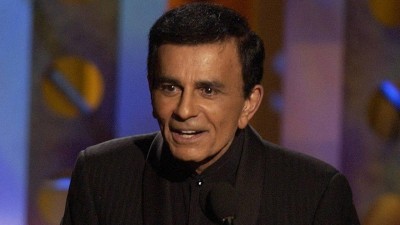 RIP Casey Kasem who brought music and his joy to us all. A good man.
– Paul Stanley

Kasem’s daughter, Kerri, said her father was surrounded by family and friends when he passed away at St. Anthony’s Hospital in Gig Harbor, Wash.

”Even though we know he is in a better place and no longer suffering, we are heartbroken,” she said in a statement.

The last years of Kasem’s life were marred by a long-running family feud over his care.

In 2013, Kasem’s three adult children filed a legal petition to gain control of his health care, alleging that Kasem was suffering from advanced Parkinson’s disease and that his second wife, Jean, was isolating him from friends and family members.

A judge in May temporarily stripped Jean of her caretaker role after she moved him from a medical facility in Los Angeles to a friend’s home in Washington state. Jean said she moved her husband to protect his privacy and to consult with doctors.

Kasem developed a severe bedsore while in Washington and was in critical condition by the time he was hospitalized in early June.

On Wednesday, a judge gave Kerri the authority to withhold food and fluids from her ailing father.

The proceeding was an emergency hearing during which the judge reviewed additional medical records provided by Kerri’s attorney, Troy Martin. He concluded that Kasem would endure more pain if he was given food or fluids. She began implementing end-of-life measures Friday. He died two days later.

Kasem gained fame with his radio music countdown shows, ”American Top 40” and ”Casey’s Top 40.” He became the king of the top 40 countdown with a syndicated show that ran for decades.

”Keep your feet on the ground and keep reaching for the stars,” was how he ended every program.