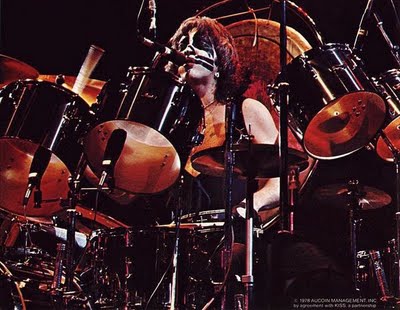 Rock And Roll Fantasy Camp With Peter Criss
Rock and Roll Fantasy Camp Announces Upcoming Camp With Original KISS Drummer Peter Criss
Get ready, NYC! Rock ‘n’ Roll Fantasy Camp is bringing the rock to the city that never sleeps for Campalooza! Don’t miss out on this special east coast edition of Rock ‘n’ Roll Fantasy Camp! … Ever daydreamed at work about shredding next to guitar legends Yngwie Malmsteen and Johnny Winter? Maybe bangin’ on the drums with original KISS drummer Peter Criss? Or how about getting funky with American blues, jazz and rock guitarist Robben Ford? Or do you want to jam with Leslie West of Mountain?
Campers will get the opportunity to jam and perform next to Grammy winners and epic guitar legends, as well as record with one of the most significant producers to work with the unforgettable John Lennon. You will take the stage at the legendary BB King’s in Times Square, in front of screaming fans and your family! You will perform your original songs on the stage that Yardbirds, and BB King himself have performed on!
The fantasy continues when you write and record next to your favorite Rock Stars at Gibson Rehearsal Studios, formerly The Hit Factory. The Hit Factory has had amazing artists record at their NYC facilities. Hits that have been recorded there include Michael Jackson’s ”Thriller”, as well as Bruce Springsteen’s ”Born In The USA” and Stevie Wonder’s ”Songs In The Key Of Life”!
On Saturday Night, you will play at The Cutting Room. The Cutting Room has hosted huge rock stars in the past. You will get the opportunity to stand and perform on the same stage that rockers David Bowie, Kid Rock, and John Mayer have all performed on!
If that’s not enough, there will be special guests and speakers from the world of music.
If you join our recording package, you can work with Grammy Award Winner Jack Douglas in Avatar Studios (formerly The Power Station) in NYC for an exclusive recording session. The Power Station is where heavy hitters Aerosmith, Jon Bon Jovi, Iggy Pop, Madonna, Blondie, Joan Jett, Journey, and so many more have recorded. Acoustically, this is undeniably one of the great recording facilities in the world.
More information HERE: www.rockcamp.com/campalooza.php
www.rockcamp.com