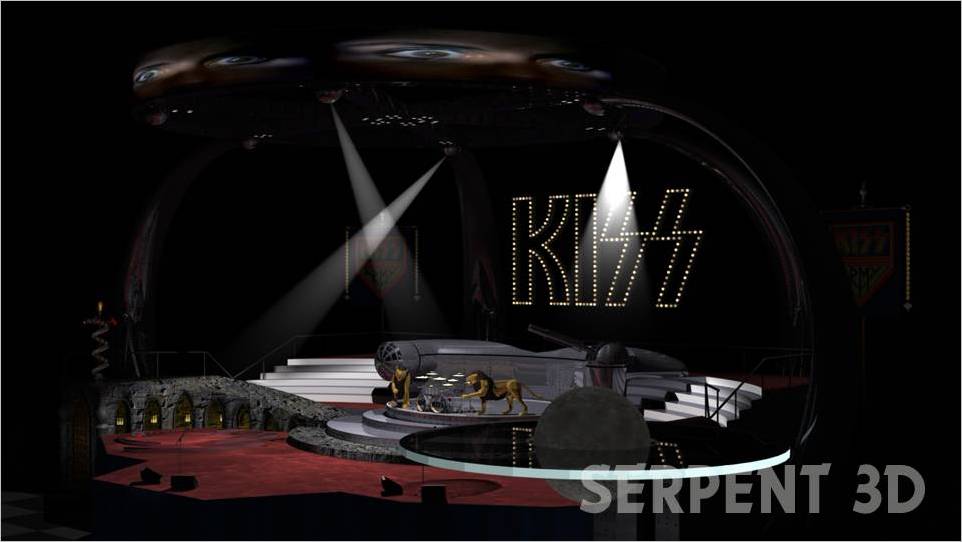 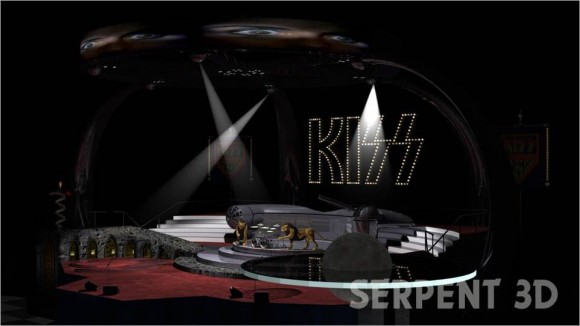 To promote our business, Serpent 3D has previously released all of Kiss’ major Kiss stage designs. With the excitement for the upcoming Kiss album growing, we thought it would offer an excellent opportunity to present Kiss with our depiction of an all new Kiss stage set and special effects. While Kiss nor their management still hasn’t got back to us regarding the design, we bear no grudge! Our alternative stage set for Kiss’ upcoming tour will be a nice benchmark while simultaneously demonstrating the powerful visualization capabilities within a project delivered by Serpent 3D.

Although the band members themselves are the most important stage props in Kiss, stage design was always an integral part of the band. Simple special effects like sirens and dry ice machines were present from their very first performances. Due to the outlandish on-stage characters, Kiss’ late manager Bill Aucoin cleverly refined the stage presentation in conjunction with the essence of their image. The first step in the evolution of the stage presentation came with the levitating drum podium, incorporated into the stage show in 1974. Stage props were present during the first three tours, but only suggested the potential and what was to be seen ahead. The transition came with the release of «Destroyer» in 1976. Following the concept and theme of the album, the stage design was now transforming into a believable environment for the Kiss characters to operate in. Each band member was given his natural habitat: Gene Simmons’ rested on his castle to the left; Ace Frehley hovered above his planetary surface on the right. Peter Criss was guarded by to giant «altar cats», while Paul Stanley took centre stage surrounded by huge crystals. It all tied in with their on-stage personas as well as with the themes of the new songs. On the subsequent three major tours, Kiss developed the stage shows, adding new elements which often reflected the change in musical style and creative direction.

It is now November 2nd 2011, and the band has been recording since late spring: «Monster» appears to become one of the most time consuming recording processes to ever have been undertaken by the band. As their previous studio album debuted on 2nd place on the Billboard charts, Kiss as well as the fans is hopeful towards the next release, anticipating a success artistically as well as commercially. «Sonic Boom» resonated well with the critics, but the tour did certainly not live up to the tradition of theme based stage sets: It merely consisted of a wall of LCD-screens flanking Eric Singer’s drums. Once upon a time, the band was undeniably leaders and inventorswhen it came to creativity and the implementation of technology in their stage presentation. Nobody should therefore be surprised that a vast proportion of their fan base felt the Sonic Boom tour was a letdown. With all previous stage designs om file, it was a fairly straight forward process selecting the various elements and conceptual art. The «Destroyer» stage set was by far the best effort at creating a believable scenography, making it a perfect frame for the Kiss experience. That stage design, created by Mark Ravitz, was therefore a natural starting point going ahead with the «Monster».

Just as Ravitz had done with the «Destroyer» design, I wanted to give the Kiss characters their individual areas on the stage. Once again, Gene Simmons has been given a castle. This time around however, the castle is created in three dimensions. There is a physical door in the front to enter the castle, and there are arches through which one can see the interior lit by medieval lamps. The spaceman character is dominating the right hand side of the stage. In 1976, Ravitz was definitely onto something when he granted Ace Frehley the planetary surface. In 2011, however, it is time to take it a step further. Now, the spaceman can take a ride on the planet. Firmly attached to a telescopic hydraulic arm, the plexi glass base now elevate the band some 33 feet into the air. A telescopic hydraulic arm was chosen, rather than a scissor lift as a scissor lift occupies more room and is far less esthetical on stage. Also, the illusion of hovering is not one that can be successfully created with a scissor lift. As a special effect, lights have been built into the leading edge of the circular plexiglas base, simulating the actual orbit — and color — of Saturn’s rings. Aviation, specifically wings and aerodynamic design was an inspiration when creating the main structures of the «Monster». Aluminium and rivets are incidentally design elements which can be found in a lot of original conceptual art from Kiss. Four bent wing structures make up the legs of the «Monster», holding up the giant light rig and the 180° video screen. In 1979, the idea of the «Dynasty» stage set was to make it look like a hangar ship crashed into the stage. Similarly, but hopefully better executed, the idea with «Monster» is to make it look like an aircraft taken apart, using the separate parts to create the stage. Most likely many of Kiss’ fans would probably mistake the cockpit to the left as a part from the famous spaceship «Millennium Falcon» of the Star Wars movies. It may look similar, but the design is actually taken from the cockpit of the real world B-29 «Superfortress», the infamous military aircraft from World War II. The other main part of this structure is the anti aircraft gun, attached to the right hand side. This is another real world element, based on a polish anti aircraft gun.

Even Kiss fans agree that «Kiss meets the Phantom of the Park» hardly can be regarded as a great movie. While mostly an embarrassment, a few good things still came of it: One of them being the Kiss talisman. During the last few tours, the elevators on stage did not have any individual conceptual art to them. This all changes with the «Monster» design from Serpent3D. To balance off the visual impact of the planet to the right, Gene Simmons’ original talisman design was used for the elevator on the left. Hidden in the stage flooring, the dragon will rise slightly before turning 36º and elevate 32 feet into the air. The dragon can also able tilt forward with an angle up to 45º, enabling hovering above the front rows of the crowd. The belly of the dragon is decorated with dragon shells and the head has been refined and adapted using an original dragon head design. Furthermore lights has been added along the lines of the wingbones, and smoke can be emitted though the valves of each individual wing tip. The drum riser plays an important role in a Kiss live show: More than merely being the base for the catman’s drum kit, it has the ability to elevate above ground fine tuned to match the most powerful musical moments of the show. Cats — tigers or panthers — have been used as a part of the drum riser since the «Destroyer» tour. Besides functioning as an obvious link to the image of the catman, it blends in well with the Kiss image, representing the symbol of power and protection: Shishi lions or Imperial Guardian lions have been used in Chinese culture since 206 BC. Traditionally, the front of the drum riser has also been decorated, but the «Monster» design moves away from the cat themed decoration. Instead we have used a giant neon 3D version of the morphed Kiss face from the conceptual art for the «Hotter Than Hell» album. The various segments of the mask have been positioned in separate depths relative to each other, creating a more interesting visual effect.

Video screens were implemented in the «Sonic Boom» stage set to allow for better views for the audience, but it completely ruined the opportunity for a theme based stage design. In an arena setting, one should ensure that even the audience in the back should have a decent view of the show. Although analog in it’s design, this aspect has not been ignored in the «Monster» stage set: The 42 m² video screen covers 180° of the light rig, providing a good view of on stage action from great distances. As the video screens are located some 42 feet above the stage floor, audience with front row tickets will not be able to get a good view of the video. However, the visual impact of the band and stage design should be more than sufficient, making video for front row seats completely redundant. Sam T. Serpent was a popular stage prop specifically used for the song «Firehouse». The band and especially Gene Simmons can be seen interact with Sam in various shots from 1977 and onward. Many fans want to see this stage prop back in action, and we agree: Sam T. Serpent fits the Kiss stage set perfectly. Introduced in 1976, two giant Kiss Army banners were hanging in the background from either side of the stage. The «Monster» design reintroduces these banners, but with a twist. The proud banner is this time held by a classic roman Vexilla (banner holder). The overall strategy when designing Serpent3Ds proposal for the Kiss «Monster» stage set was to use traditional elements, converting them into new structures and special effects. Gene’s castle is not a new element, but the execution of the castle in «Monster» has never before been seen. The same can be said about the spaceman’s planet. Having seen a Kiss concert, you would always want and expect something bigger and better for the next tour. I would argue that «Monster» is better, but it is not bigger. Although Kiss is a creative entity like no other, there are limitations in terms of funding and size. The goal was not to make «Monster» bigger, but to make it better, while still keeping cost down. There is not more hydraulic technology in the «Monster» set, but the various lifts are custom made for Kiss. The size of the stage is neither bigger: Although a little deeper, the width of the «Monster» stage is 98 feet, approximately 10 feet wider than the original «Destroyer» stage set. It is not about size, but about quality and execution — paying attention to detail.