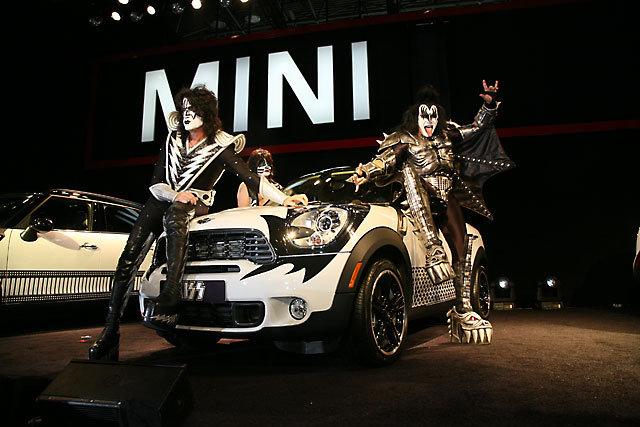 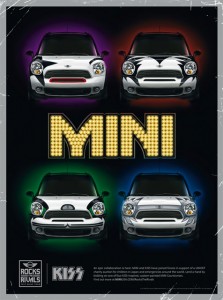 WOODCLIFF LAKE, N.J., April 21, 2011 /PRNewswire/ — MINI USA launches the ”MINI Rocks the Rivals” competitive test-drive tour in the USA, and as part of the kickoff, MINI has partnered with legendary rock band KISS to raise money for UNICEF to help children in Japan and emergencies around the globe.

KISS band members made the announcement live as four MINI Countryman vehicles with KISS-inspired designs made their debut at the New York Auto Show, each representing one of the KISS band member’s iconic faces. All four vehicles will be auctioned after being custom painted with the revealed design and signed by all four KISS members. Fans will be able to bid on the vehicles during a special Father’s Day eBay charity auction opening May 29th and proceeds will be donated to UNICEF. 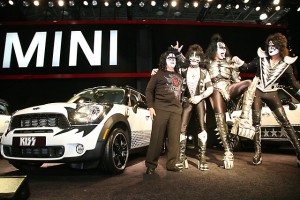 ”Our hearts go out to the people of Japan in this time of great tragedy. We wanted to help and also to provide a real way for the KISS Army to get involved,” said Gene Simmons of KISS. ”UNICEF raises money to help children who are still coping with the effects of these disasters, and also supports other very important emergency relief efforts around the world. Join the KISS Army in giving.”

In addition to the vehicle charity auction, MINI USA will sell MINI vehicle wraps of the KISS designs revealed at the New York Auto Show beginning April 21, 2011. MINI USA’s proceeds from those sales will also be donated to UNICEF. 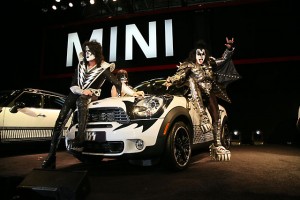 ”MINI and its owners have long been dedicated to contributing to philanthropic and charitable efforts,” said Jim McDowell, Vice President – MINI USA. ”MINI USA had established a relationship with KISS as we kick off the ’MINI Rocks the Rivals’ tour in the US, and these fundraising initiatives were an ideal way for us to incorporate a fun charitable component to the campaign with these original pieces of art.”