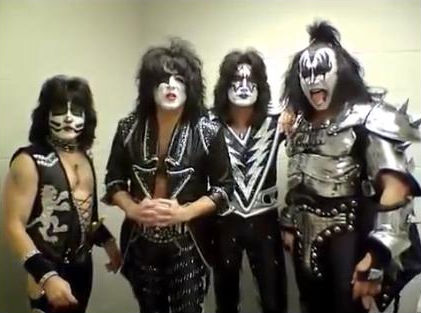 Bud Light Golden Wheat presents the legendary rockers KISS ( www.kissonline.com) on Facebook via a Ustream streaming link live from their show at the Staples Center in Los Angeles at 9 pm PST on Wednesday, November 25. This is the first-ever live web concert for one of rock’s most iconic bands as KISS celebrates the November 19 release of their new, three-track Guitar Hero pack featuring Modern Day Delilah, I Was Made for Loving You and Lick It Up.

Users can watch and interact by visiting the official KISS Facebook page at facebook.com/KISS or on Ustream at www.ustream.tv/channel/kiss-live to connect with other KISS fans for a personal chat and live video experience in real-time during the show. Users who own an Xbox 360 video game and entertainment system from Microsoft can click the Guitar Hero banner at the bottom of the screen and go directly to Xbox LIVE Marketplace on Xbox.com to purchase the KISS three-song track pack and queue it up for download to their Xbox 360 console. PlayStation3 computer entertainment system and Wii owners can purchase the track pack through the in-game music store in either Guitar Hero 5 or Band Hero.

KISS chose Ustream ( www.ustream.tv),the leading live video platform on the web, because of its powerful platform and scalability in reaching a global audience of unlimited size. The band wanted to connect with their legion of fans that might not have had the chance to catch them during the North American leg of their 35th-anniversary KISS/Alive 35 tour, a 44-city tour that continues through December 15.

”For 35 years, KISS has rocked all over the world to sold-out crowds and set the standard for what a rock show should be. This tour will solidify our place in history for having the loudest, most entertaining and hardest rockin’ show in all of music,” said Gene Simmons.

The iconic band recently made KISStory when Sonic Boom, their first album in 11 years, debuted in the No. 2 spot on the Billboard Top 200. This was the highest-ever album debut for the legendary band. Frontman Paul Stanley produced the new album that marks a return to their signature 70s sound.

In creating Sonic Boom, the band also wanted to give back by putting together a value-added release that offers three CDs for the price of one. The release includes Sonic Boom, their centerpiece of new material including their single Modern Day Delilah, a second disk of re-mastered KISS classics such as Rock and Roll All Nite and Detroit Rock City, and a third, live disk from their show in Argentina earlier this year.

Get the latest news from KISS at www.kissonline.com and for more information about the KISS three-track Guitar Hero pack, visit http://hub.guitarhero.com/.