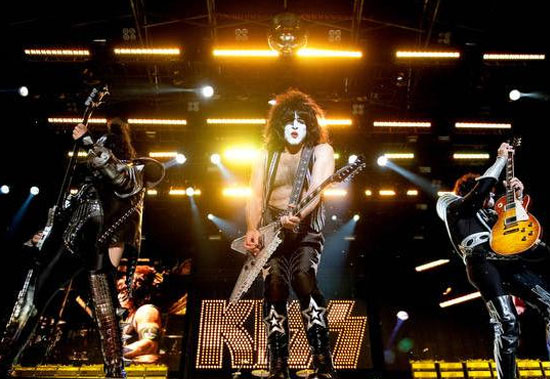 MONTREAL – The legendary and ever-popular rock’n’roll band Kiss has almost set fire to the Heavy MTL festival of music, Sunday night at Parc Jean-Drapeau, sending a variety of its many successes.

A video of the group’s arrival in Montreal warmed the huge crowd. Suddenly a large black flag, the name of the group floated in the wind. Just then a voice rang out: ”Alright, Montreal. The best band in the world, Kiss! ”

On the huge stage at the festival, the group appeared and the show took its flight in an impressive arrangement of sounds, lights and editing graphics on large screens. Back in town for the umpteenth time, guitarist Paul Stanley, bassist Gene Simmons (two founding members of the group), drummer Eric Singer and guitarist Tommy Thayer delivered an explosive and spectacular show.

True to their winning formula of big circus that builds bright explosions, flames, nothing was spared to please the Montrealers, especially the members of Kiss have always enjoyed coming to the city.

No wonder they are experiencing a tireless success, as were evidenced by tens of thousands of hardcore fans present, who wore masks, makeup, hats, t-shirt and other items bearing the image of the group.

A ton of classics.

”Montreal, how are you? What incredible crowd! Tonight is a huge party rock and roll, ”commented Paul Stanley at the hearing gathered on the lawn and in the stands. It was also pleased with a surprising involvement, have fun with the audience, which were useful.

In a performance of about two hours, Kiss gave a marathon of songs with Modern Day Delilah, Let Me Go, Firehouse, Do You Love, I Love It, Black Diamond, Detroit Rock, Lick It Up and Shout It Loud.

Despite the protests of some heavy metal purists who fuse on the internet before the start of the festivities of the weekend, we can say without hesitation that Montrealers like Kiss, again and again.