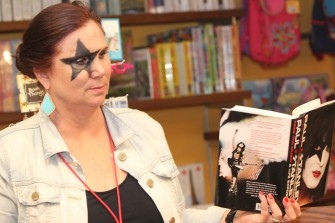 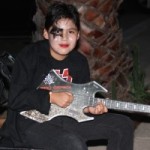 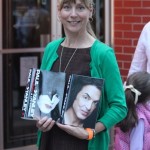 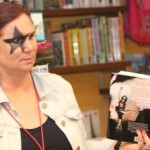 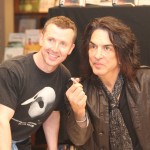 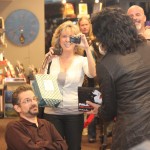 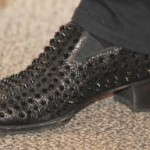 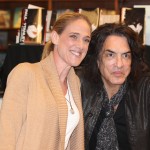 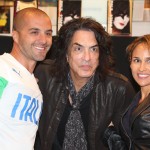 More than 600 fans of Kiss vocalist and guitarist Paul Stanley descended on La Jolla April 17 for a chance to have the 2014 Rock and Roll Hall of Fame inductee sign copies of his new memoir, “Face the Music: A Life Exposed” at Warwick’s Bookstore.
Though people of all ages traveled from as far away as Los Angeles, Phoenix, Las Vegas and Germany for a chance to meet the Kiss star, Anne Marie Flores merely had to walk over from her job at Best Western Inn by the Sea on Fay Avenue.

Born Stanley Bert Eisen, the 62-year-old rocker was about an hour late, giving Flores a chance to dive into the book’s prologue while waiting in line.
“I wish he’d go back on stage,” Flores said, noting Stanley’s 1999 lead in a Canadian production of ‘The Phantom of the Opera.” “I don’t care what it would cost — I’d pay.”
Warwick’s employee and Kiss fan Emily Vermillion of La Jolla said she was excited to learn Stanley was coming to place where she works.
“I was teaching art in Iowa City, Iowa (in the late ’70s) and all of my fifth and sixth graders showed up for Halloween in Kiss costumes,” she recalled. “I said, ‘I’ve got to find out about these guys,’ and I did — and I’ve loved them ever since.”
Stanley took time earlier in the week to speak with the La Jolla Light about his new book, in which he recounts being born without a right ear (a condition known as microtia), his dysfunctional family and subsequently being ridiculed as a child. The book is also filled with pointed criticisms of his band mates — including alleged anti-Semitism by original Kiss members Ace Frehley and Peter Criss, and lying and cheating by co-founder and longtime collaborator, Gene Simmons.

“Ultimately, if you start to drown me then I have to let you go,” he said of the off-again, on-again participation of Frehley and Criss. “Kiss has always been my baby, as far as I’m concerned. … At the end of the day, I’ll do whatever I have to, to keep it moving forward and that really is the mindset that got me through a lot of very difficult times.”
Told that many in the so-called “Kiss Army” consider his 1978 solo album and Kiss’s “Dynasty” (1979) to be rock masterpieces, Stanley laughed. “Well, I’d agree with half of that,” he said. “I think ‘Dynasty’ is a good album. I think there was some great songs on that, but I certainly am a little partial to my solo album.”

His personal favorite, he said, is the album that put Kiss on the global map — 1975’s “Alive!,” recorded at Detroit’s Cobo Hall.
“It was the giant step that put us into the international hierarchy and, honestly, the last two albums (2009’s “Sonic Boom” and 2012’s “Monster”) mean the world to me because they are built on our past and stand firmly in the present and future.”
An abstract painter who has held exhibitions in La Jolla, Stanley said he has taken a hiatus from the canvas.
“The very reason I did it in the first place was to get away from pressure, and all of the sudden I had shows every month and there was a fair amount of pressure to produce. I didn’t want that to taint something I kind of found as a refuge … but I’m certainly painting and will start doing shows again.”

With numerous hits to his name, including “Rock and Roll All Night,” “Detroit Rock City,” “I Was Made For Lovin’ You” and “Hard Luck Woman” (originally penned for Rod Stewart, but ultimately recorded by Kiss and sang by Peter Criss), Stanley used his Hall of Fame induction with Kiss this month as an opportunity to call into question what many in the industry consider the organization’s jaded nomination and selection process. Stanley asserts that Rock Hall organizers, having shunned Kiss for 14 years, didn’t even provide passes for them upon their arrival.
So, how was Kiss was received by its industry peers at the induction ceremony in Brooklyn?
“Most bands, from all different genres, have really championed us,” he said. “The people who don’t understand us and have done their best to squash us are critics — and how much credence can you put in somebody’s opinion who doesn’t pay for a ticket or pay for an album? The people who I consider important were all terrific and beyond cordial, very happy about our being inducted. I see those as my peers and don’t worry about the rest.

Prior to the Rock Hall ceremony, organizers insisted that Stanley and Simmons perform in makeup with original guitarist Frehley (of San Diego) and drummer Criss, though they have long been replaced, in large part due to their well-documented excesses with drugs and alcohol. Though Frehley and Criss were for it, Stanley and Simmons declined.
“We don’t jump through hoops for anybody,” Stanley insisted. “(Rolling Stone magazine and Rock and Roll Hall founder) Jann Wenner has hated us from Day 1, has never put us on the cover (incidentally, until this month) and has chosen to ignore us as best as possible over the years, telling his writers not to write about us, and even going as low as not acknowledging an obituary for (former Kiss drummer) Eric Carr, who died of heart cancer at 40 years of age, after playing to millions of people and playing on multiplatinum albums. That’s not an oversight — it was carried by every other media. It’s just malicious and mean-spirited. So, between Jann Wenner and a burnout like (music critic) Dave Marsh — that’s the Rock and Roll Hall of Fame. It’s just a couple of smart businessmen who may have once loved music, but now see it as an opportunity to be tastemakers. Instead of leaving the voting to the public, they hide behind this very impressive title, which they trademarked. You could have trademarked it, and then you’d be the Rock and Roll Hall of Fame.”

Unlike Frehley and Criss, Stanley avoided a life of drugs and alcohol, choosing exercise and fitness.
“At this point what I do religiously is a dancer’s workout called Cardio Barre,” he said. “It really revolves around dancer movements (that) are core strengthening and also incredibly toning for your body.”
If he had anything approaching a vice, Stanley said, it was sex and being a workaholic.
“That was my drug of choice. It got us all onto this Earth, it hurt nobody and it was certainly fun. There’s been no pressure for me,” he maintained. “Success is about a work ethic — and if you’re proud of what you do and you give it your best, then it’s only a matter of how hard you’re willing to work before you succeed.”
Asked if Kiss would be willing to play at La Jolla Cove or the Children’s Pool (the federal Marine Mammal Protection Act allows for the use of loud noise to disperse seals and sea lions, and the latter’s smell), Stanley said it’s possible.
“We could just call the program, ‘Sealed with a Kiss,’ ” he quipped.