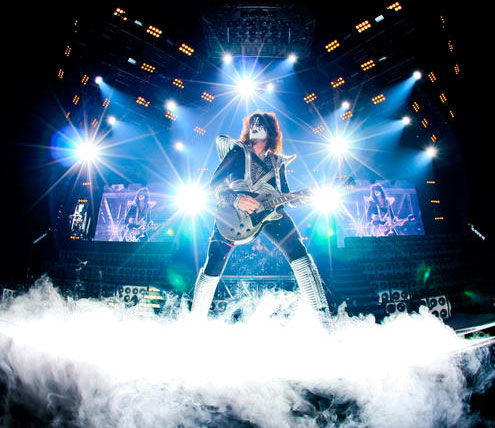 For nearly 40 years, Kiss has been one of the planet’s most recognizable, popular and successful rock bands.

And it seems like that isn’t going to be ending any time soon.

For the past three years, the band has performed more than 250 shows, in three dozen nations around the world, to an audience that is arguably getting younger and younger.

As part of a short mid-summer tour, Kiss, comprising original members Gene Simmons, 61, and Paul Stanley, 59, along with longtime drummer Eric Singer and guitarist Tommy Thayer, will be shaking the foundations of Casino Rama outside Orillia, on Tuesday and then take to the stage at Caesar’s Windsor the following evening.

Thayer, who has been working with the band in a background capacity since the early 1990s, and joined the band as a full-fledged member in 2002, told QMI Agency about what a ride it’s been for the veteran rockers over the past number of years.

”It’s been a whirlwind, and it keeps going because it’s been going so well that we keep on adding shows here and there. This run we’re on now is only about five or six weeks, but a lot of the shows are up in Canada, which has always been one of the greatest places for us to play. Some of the biggest turnouts, almost ever, have been at some of our Canadian shows. There’s a lot of great fans there,” Thayer said from Los Angeles, where the band had taken a short break from touring to do some work on their next album.

The band’s previous album, Sonic Boom, was the first studio album for Kiss in more than a decade, and the first with Thayer.

It was a smash hit, in an era when record sales have been in decline thanks to the advent of downloading. On the strength of the singles Modern Day Deliliah and Say Yeah, the Sonic Boom world tour has, essentially never stopped. Thayer said all of the band members, but particularly stalwarts Simmons and Stanley, were very pleased with the album, and were heartened by the critical acclaim it received, as well as the overwhelming fan support.

Like their as-yet-untitled forthcoming album, Sonic Boom was recorded ’old-school’, much like Kiss’ first three albums — Kiss, Hotter than Hell and Dressed to Kill — in the early 1970s.

”We were super proud of how we wrote and recorded that album, and the way it sounded. From top to bottom, we were 100% happy with how it turned out. The whole design of it was something that we were going to do just between the four band members. We did all the writing and recording, we didn’t get influenced, or have outside input on song selections or anything like that. We did it almost like a new band starting up would,” Thayer explained.

”It reminded me of that feeling of going back to when you first got into a band, where you’re in your garage or someone’s basement, and you’re writing songs and recording them. There was no real agenda with Sonic Boom. We wanted to keep it simple, and not over-think it.”

Thayer said eight songs have been recorded for the new album, and there are still four or five more to go.

”This new record has the same approach, but I think we’ve even upped the ante as far as the writing, and I think we’re just more comfortable now. We’re coming up with even cooler ideas. And even the recording process is kind of a throwback. In the studio, everybody is playing together, it’s not just building tracks up one instrument at a time. We all played together, and we recorded on analog tape … to get the real straight-ahead rock sound,” he said.

”When you hit that tape, with a hard punchy sound, there’s a certain style and warmth that you don’t get on a digital recording.”

Thayer, who turns 51 in November, said he is heartened to hear that many fans, including an increasing number of young fans, are rediscovering vinyl LPs, and seeing music are more than just another disposable digital commodity.

”When we were younger, you’d buy an album, and you’d sit there for hours looking at the cover, and every little detail and all the liner notes and lyrics, while you played it over and over again. There really was a visual and interactive part to it. And it was an event to go buy records,” he said.

”And then with cassettes and later CDs, you kind of lost a lot of that, because the packaging got so small. And it became less important, and now you’re at the point where you do a digital download and that whole ’event’ element to new music is go. It’s no wonder that kids today don’t want to collect music like we used to. What is to collecting a digital file? Who cares, right?”

But he said Kiss still thinks it’s important to treat every new album as an event … and apparently it’s worked, as Sonic Boom entered the Billboard charts at No. 2 when it was released and topped the charts in many other countries.

Thayer’s story is an interesting one. A life-long fan of Kiss, he’s been able to live the dream of every kid who ever signed up for the Kiss Army fan club, or dressed up at Hallowe’en in the vaunted Kiss make-up as either the Demon, Starchild, Spaceman or Cat.

Originally from Portland, Ore., he formed a band called Black ’n Blue in his hometown in the early 1980s, and moved to Los Angeles to find fame and fortune.

After just six months on the circuit, the band was signed to Geffen Records and earned some slots opening up for some pretty big bands, including Kiss.

”That’s when I met Paul and Gene. Not long after that, we asked Gene to produce our third and fourth albums for Black ’n Blue, which he did. So we kind of built a relationship and it started evolving, and soon thereafter, he asked me to come and write with he and Paul for a record they were working on. So I got more involved in their world. After Black ’n Blue ran its course (around 1989), they hired me to come and work for them, part time to begin with, just as a guy to help out with whatever project they were doing at the time,” he said.

In 1996, Kiss donned the face paint again after 13 years without it. The band also reunited with the two other iconic original members, guitarist Ace Frehley and drummer Peter Criss.

Thayer was working behind the scenes, basically working with Frehley to help him re-learn his guitar parts on many of the classic songs which he hadn’t played for many years.

”And it was partially managing their reunion tour, doing a lot behind the scenes. I was also editing and producing their long-form videos. And, at the end of the day, it all evolved to where they wanted to make a chance in 2002, and they asked me to step into the coveted role as the lead guitar player, and that was almost 10 years ago now,” he said.

Thayer replaced Frehley, who wanted to go back to his solo career, and donned the Spaceman outfit and make-up.

Although there were some fans who resented both he and Singer donning the looks of Frehley and Criss respectively (back in the early 1980s, Criss’ replacement Eric Carr was The Fox, and guitarist Vinnie Vincent had an ancient Egyptian design on his face paint), Thayer said the vast majority have no problem with it.

”Being in Kiss for the first time was almost an out-of-body experience. You can’t ever imagine something like that happening. And I think 99 per cent of the fans are cool now with me, just because we have been touring for several years, and particularly for the last two or three years, the shows have been so huge, and it’s a different kind of crowd now. There are a lot of new fans of all different ages, and lots of younger kids that are just discovering Kiss, and it’s not a big deal to them,” Thayer said.

”These days, people are going to see and experience Kiss — the extravaganza, see the performance, the spectacle and here the songs. It’s more like the circus coming to town. People are coming to see a cultural icon. I think people need to get real with the fact that, as time goes on, the bands are going to change.

”And some purists say, ’they should just hang it up then.’ Why? That’s not reality. People still want to see these bands and hear the music, and if there are different people up there doing it, people have to get real to that fact it’s going to happen. Look at Lynyrd Skynyrd, and Journey and Foreigner. But don’t get me wrong, it’s got to be done well, if not better than the original, and it’s got to look and sound great. Rock and roll shows like ours are something that people are always going to want to see, and it’s not going to just end all of a sudden.”

And Thayer confirms that neither Stanley nor Simmons have given any indication that they want to stop any time soon.