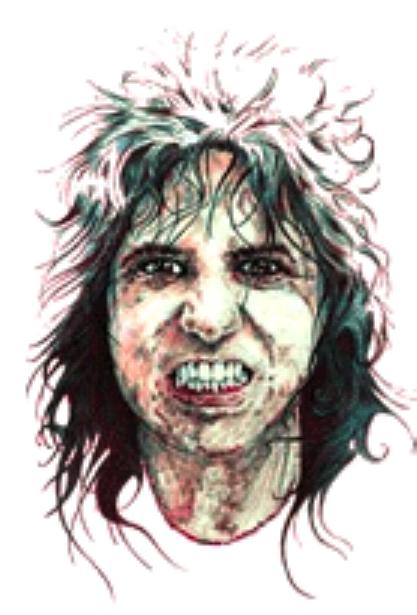 Richie Scarlet, known as the ”Emperor of Rock and Roll,” is really the working man of rock. He lives and breathes his craft, never to be mistaken as ’weekend warrior.’ While never having mainstream success, his musical credibility is highly respected amongst his musical peers, having played in bands with legends like Ace Frehley (KISS), Leslie West (Moutain), and with the members of the Alice Cooper Group (sans Alice).

Although Richie has spent many years playing in several bands, his real musical prowess can be discovered through his solo work, which his first solo album (released under the moniker, ”Richie Scarlet and the Seducers”), ”Hit for Hit,” was released in 1984. Once Ace Frehley rejoined KISS in 1996, Richie really got down to work as a solo artist and started churning out great CDs on a regular basis, starting with ”Wise Guy From New York” in 1997. Since then, Richie has released five other CDs, covering the gamut of original music, cover songs and even a live album. His most recent CD, ”Fever” was released in the fall of 2010.

Since his gig playing with Ace ended, not only has Richie recorded some great music, but he has toured with Sebastian Bach (playing guitar), Moutain (playing bass), and has played gigs with various members of the Alice Cooper Group. Most recently, Richie joined a band called, 5th Avenue Vampires, with ACG bassist Dennis Dunaway. 5th Avenue Vampires released their debut CD, ”Drawing Blood” (also in 2010), and are currently working on songs for their next album.

Richie recently granted John Jeffrey of RockMusicStar.com an exclusive interview, discussing his recent musical work and plans for the future.

RockMusicStar: 2010 was a very productive year for Richie Scarlet. Could you recount the projects you completed last year, for our readers here at RockMusicStar.com?

Richie Scarlet: Yes, 2010 was a VERY productive year, (and also) a very creative year for Richie Scarlet. It included writing and recording my new CD, ”Fever,” which was mostly recorded by myself and a guy named Mike Arturi, who plays with the Lovin’ Spoonful, which was a 60’s band that had a lot of hits. Mike is the drummer for that band, and I flew him in from Chicago and we proceeded to lay down 8 (drum) tracks for the CD. So that was a lot of progress in one day. So 90% of it was Mike Arturi and myself on bass, guitar and vocals. A guy named Tarik Solange, engineered, co-produced and mixed it, and the end result became, ”Fever.” That was a big part of 2010.

RS: He engineered and co-produced the 5th Avenue Vampires CD, which I also did in 2010. That band is based around a singer named, Joe Von T. He writes all these kind of horror lyrics and I put the music to the lyrics, as well as Dennis Dunaway – who I am very thrilled to be working with. Considering he was in one of my favorite bands, the Alice Cooper Group. Which, by the way, Dennis is up for induction to the Rock and Roll Hall of Fame this year. I’m very proud of that and very happy for him. That record (”Drawing Blood”), I guess is what you could call a ’horror rock’ record, and it’s a little different for me. It’s a different road I went down to get some of this scary shit out of my system. (Laughs) We’re currently working on a new CD, also with Tarik Solange behind the board. We have 2 songs completed. One written by myself and Joe Von T, called ”White Ladies,” and the other song was completely written by Dennis Dunaway, called ”Wild One.” It’s just a killer song.

RMS: One project you worked on in 2010 was the Peter Criss ’Rock’ album. Could you tell us about that project and when we may be able to expect to see it released?

RS: I did that record quite awhile back. I had a blast doing it with Peter. I love Peter Criss. We’ve been friends for a long, long time. I really wanted to play guitar on it, but all of the guitars were already done by his guitar player, Angel, who’s been with him forever. So I ended up playing bass. I did 8 or 9 tracks on the record. This record is a Rock and Roll record, and it’s not like his previously released one (”One For All”), which was a ballad/crooner kinda thing. This is back to bitchin’ Rock and Roll. There’s some really good tracks on this record, though I haven’t heard it since I cut the tracks. It’s due out sometime this year on Sony records. I don’t know when the (exact) release date is, as I’m actually surprised it hasn’t been released yet.

RMS: One thing people may not know, is the way you wound up recording the bass parts, was a very a-typical way for you, as you told me that you had not heard any of the material before recording your tracks.

RS: Usually when you’re asked to play on a record, you’re given the material, so you can work on it, before you come in to record it. But in Peter’s case, he was not keen on releasing any of his material, so I had to go in there cold. Having no idea what the tracks sounded like or anything. I didn’t have an absolute clue about anything (regarding the material). Therefore, I decided when I got to the studio, I was going to go right to the tracks, just roll up my sleeves, and go for it. That’s exactly what I did. I pulled up to the studio driveway, I got out (of my car), Peter’s studio engineer was standing there, and we proceeded to walk into the studio. I didn’t even waste five minutes. I sat down and I told him to start playing me the tracks. I just took track by track. I’d take the verse, then work on the verse. I’d go to the chorus, and then the bridge, whatever the arrangement was. I approached it with a real mental attitude, that since I don’t have the material – BRING IT ON!! It was definitely a different way to do a record, but it kept me on my toes. I’m glad I was able to put my input into it. I gave some production input also. That was it, and it was a total blast. I kinda keep forgetting I even did it, because it was quite awhile ago, but KISS fans have a way of reminding me that the record will be coming out. Hopefully, it will see the light sometime soon.

RMS: Many music fans/KISS fans remember you from all of the years you worked with Ace Frehley, so to hear you working with another member of KISS will undoubtedly make many people happy.

RS: I went from one rebel of KISS, to another rebel of KISS. It was always ’in the cards’ with Peter Criss and I, because we’ve jammed many times before. When you play with someone and the vibe is right, you usually end up recording with them. And that’s exactly what happened. I was very happy to do it, though I would have loved to play some guitar on it. I think it’s going to be a really good record and I’m not just saying that because I played on it, and trying to make Peter look good. There’s some actually well written songs on it.

RMS: And most people know, you’re very straightforward with your opinions. You don’t just blow smoke up people’s asses.

RS: If I didn’t dig it, I would tell ya, ”Yeah, it’s OK,” ya know? I even told Peter that I didn’t think that, as far as KISS fans go, that most fans weren’t really knocked out by his last album (”One For All”). But it was something that Peter just wanted to get out of his system.

RMS: Speaking of ’getting it out of your system,’ that’s what you said the 5th Avenue Vampires did/does for you.

RS: I was always an Alice Cooper fan, and this cat, Joe Von T, writes very scary lyrics and I would try to come up with scary guitar parts. But I would have to say the new material we just cut is very different than the first record. It’s not so much of the horror thing, it’s more straight ahead rock and roll. I just finished writing the music for 4 more new songs, so we’re gonna be going into the studio and cutting at least another 4 tracks within the next month for that.

RMS: Do you find that having a band with a singer who does a ’character’ type vocal (like Alice Cooper) is more of a challenge, as it’s somewhat of an acquired taste for the listener?

RS: There’s no doubt that Joe was influenced by Alice Cooper. ”It is what it is,” that’s what I tell Dennis Dunaway. The new material is unlike a lot of that record. I like it more, better. And on the new record, Dennis and I are doing vocals along with Joe.

RS: Well, I’m writing it now, as I already have 2 CDs written, but I always like to write new songs. I can’t say whether or not I’ll have a new CD out THIS year, but it will certainly be started on.

RMS: There are rumors that the remaining members of the Alice Cooper Group will reunite this year for a reunion tour of sorts. If this happens, how will it affect the plans for the 5th Avenue Vampires?

RS: I don’t know if that’s gonna happen. I do know that Dennis and the original group will be appearing on Alice’s next record and they just played recently in Arizona, where they all grew up. I would imagine logistically, that there would be a tour. After the record’s released and they do get inducted in March, into the Hall of Fame, but I can’t say for sure if that’s gonna happen (regarding the tour). I certainly would love to see it happen and I would be right there screaming for him. I do hope the four original guys go out and do a tour, and Steve Hunter, right now, is doing the guitar work for them. Steve Hunter played with them on the ”Billion Dollar Babies” record, so he belongs where he is with them. If it does happen, it will be very much like when Ace came to me and said that Paul and Gene wanted him back in KISS. Although, we had been working on his solo record and touring together for years, I absolutely was thrilled that he was having the chance to go back with KISS. I gave him my complete blessings on it. It’s very much the same with Dennis. I’m very, very happy he has the chance to go back to the band that he was a founding, starting member of. If he told me, ”Richie, we’ll be taking a year on tour and I can’t do the Vampires,” that would make me more happy (being happy for Dennis) than actually doing the Vampires record. If that makes any sense or not. I’d be very happy, and I hope it happens for him.

RMS: Speaking of Ace Frehley, have you had any contact with him in the last few years?

RS: I haven’t talked to Ace very much, but Ace will always be in my heart. He’s the guy that opened a lot of doors for me. I’ve said it before, I’ve lived three lifetimes with that man, and when he’s ready to live a fourth one with me, I’m sure I’d be there to live it with him.

For more info on Richie and to order his latest CD, ”Fever” go to www.RichieScarlet.com

Special thanks to Joe Von T and Joann Scarlet for product samples and arranging the interview!