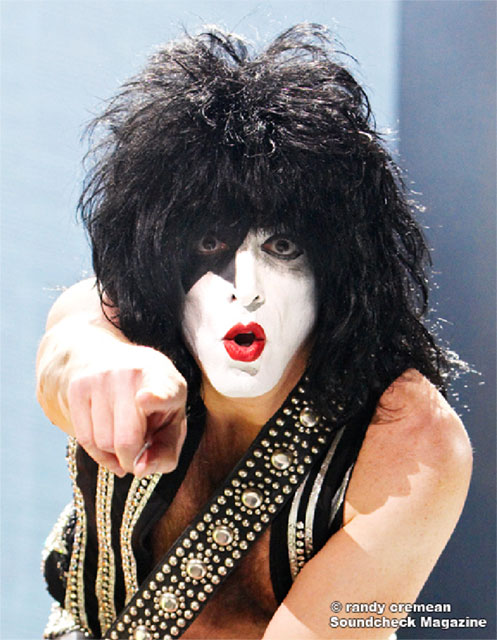 ”For all the talk about bands doing horrific business, we’re doing terrific business,” says Stanley, 58, down the line from Raleigh, N.C., recently, leading up to the band’s only Canadian summer date on Sept. 10 in Toronto.

”We had 14,000-15,000 people last night, and the night before pretty much the same. I think the only thing that’s changed is that people don’t want to pay a lot of money. You know if you pay for a Rolls Royce and you get a Chevy, then you kind of feel cheated. So if you’re paying to see something, you damn well better see something.

”I have nothing against a guy who sits on a stool with an acoustic guitar, but to pay the same amount for that as you pay for a spectacle is insanity. When you come to a KISS concert, you know where you’re money just went ’cause it’s blinding you, deafening you and pummeling you.”

When it comes to spectacle, few acts can measure up to the face-painting, costume and platforms-wearing KISS, who have been major road warriors of late. They staged their Alive/35 tour last year which morphed into their Sonic Boom tour (named for their 2009 studio album), which is being called The Hottest Show on Earth tour in 2010.

Still, Stanley said the platform boots, combined with the physical nature of the KISS show, have definitely taken their toll over the last three and a half decades with him undergoing two hip replacement surgeries.

”It wasn’t the platforms, it was years of doing a lot of roundhouse kicks, and basically you just wear out your hip, ultimately you wind up with bone on bone so I continued for years and finally it just reached a point where it needed to be replaced — but I’m basically good for another 50,000 miles,” he joked.

This current leg of the summer tour has also been taxing.

”We played last night in close to 100 per cent humidity,” said Stanley. ”It’s kind of like trying to run a marathon under water. It’s taxing; it’s not for the weak-hearted.”

Speaking of which, Stanley missed his first show in the history of KISS in July 2007 when he was hospitalized with tachycardia, or rapid heartbeat, something he said he’s been dealing with since childhood.

”It has nothing to do with not being healthy. It’s this odd condition that will never kill you, but yet your heartbeat while your sitting can go from 70 or 80 beats a minute to 200 from one beat to the next and stay there. Finally, they thread a catheter up into your heart to find what’s going wrong and they just zap it, they burn it, and the next day you’re back in the gym. I had it done. Look, I’m the bionic man. They’ve gotten me up from a 103 temperature to do a show. The show must go on.”

Once The Hottest Show on Earth Tour wraps up in September, Stanley expects the band to hit the studio in February of next year to make a new studio album and he doesn’t expect the compilation DVD, Kissology 4, to see the light of day until 2011 despite rumours of a fall release.

”It’s really still in the planning stages,” he said. ”We have so much incredible footage, and we’re just trying to make the most cohesive package.”

Paul Stanley of KISS says the band enjoyed themselves when they appeared on American Idol in 2009 performing with that year’s runner-up Adam Lambert.

”When we were asked to be on the show, our ground rules were ’We do our whole show as we want to or we don’t do anything,’ and they gave us carte blanche and we blew the place up so it was great,” he said.

But Alice Cooper recently said he didn’t think reality shows like American Idol gave rockers enough of a platform and now Aerosmith frontman Steven Tyler is rumoured to be one of the new judges.

Ultimately, Stanley, who was never approached to be a new judge (”They probably couldn’t afford me!” he joked), thinks changes are a good thing for the new season.

”I think the show could use a bit of an overhaul so I’m curious, now that (producer) Nigel (Lythgoe) is back. I’ll be really curious to see where the show goes ’cause I think it was time to breathe some new life into it just overall,” he said. ”And I think he was the first person to say that. So it should be great.”