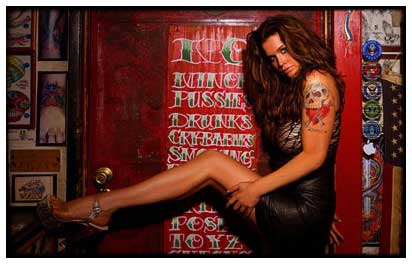 Carrie Stevens is a world famous model, actress and her resume includes studies in journalism at Memphis State University. Her name is familiar to all the KISS fans from her relationship to the late drummer Eric Carr. Turning back the hands of time, we attempt to examine the importance of music in her career and try to see how crucial was the music industry in the shaping of her professional (and not only) route in life.

Carrie, first of all, let me tell you that it feels like I’ve known you for more than 20 years. The first time that I read about you was in 1988 in a KISS magazine and since then every then and now your name always found a way in the music press…That’s very nice to hear…thank you.

Let’s start from the early years…how would you describe your childhood? Did you have a normal upbringing?

A normal upbringing…let’s see…I grew up in a place where there were always cows and chickens around me. It was pretty quiet but I really enjoyed that time. My parents were divorced…I made a lot of friends and I kept in touch with most of them along the way.

As a teenager, what kind of music have you been listening to?

Well, definitely KISS, Van Halen…that was my second concert ever back in 1984. My first one was Journey…What else…Tesla, Bon Jovi, Cinderella, Queensryche, Dokken, Motley Crue…you get the picture.

Well, if you think about it, the 80s gave birth to all the great bands of hard rock music. Surely, there have been lots of groups from the 70s but their style changed with the new decade and fitted perfectly with the new sound.

I’ve read in your site that you studied journalism at the Memphis University. Was there ever any thought of following a professional career as a journalist?

No, not really. I never went so far although my dream at the time was to become a journalist and write for Rolling Stone or Metal Edge.

Let’s go to the KISS chapter…I know how you met Eric and I have read through the years many of your interviews regarding Eric’s importance in your life. Did you feel at the time that this would be a really special relationship for you?

I was very young at the time and everything’s was new to me…I was only 18-19 and Eric was 37-38. But, I was so in love with him and it was obvious right from the beginning that this was a really special relationship.

Were you intimidated by Paul Stanley and Gene Simmons? I mean, you were only 19 years old and you get to hang out with an established act like KISS…

Oh yeah! Definitely…especially Gene can be really intimidating at the beginning but when you get to know him better, you see that he is not as evil as he tends to show (laughs)!

Right! It was very funny (laughs)…I was actually sitting backstage…it was during the Hot In The Shade Tour and he saw me sitting on a couch…Eric was somewhere, I think he was grabbing something to eat…anyway, Paul wasn’t aware that I was with Eric as it was pretty early in our relationship and he suggested to take me at my hotel with his limo…I said that I was with a friend of mine and we will return by our car. It was very uncomfortable, I’ll tell you this…Paul was insisting and I finally said to him: “Ok, I’ll meet you at your hotel room”. I never showed up but I still remember the hotel room…it was 220! Paul never said a word to Eric about it.

So, you entered the KISS world and what comes with it…good and bad. Apart from Christina (ex-wife of Bruce Kulick), did you make any good friends along the way and have you kept touch with any member of KISS?

Uhh, JW (John Walsh) was Eric’s roadie, his drum tech…we are still in touch, and we send e-mail and stuff. For many years, I was in touch with Shannon (Tweed) but I lost touch with her…I am still very close with Gary Corbett who was the off-stage keyboard player for KISS. That’s about it…you know, it’s funny you should ask because there is a company that manages lots of bands…a friend of mine Paul Geary who used to be the drummer of Extreme is now there…we go to concerts together and stuff. One of the guys who work at the management office could not remember where he knew me from and one day he came to me and said: “Oh, I just figured it out where I know you from…you used to be Eric Carr’s girlfriend. I was the band’s touring manager in 1990”. Small world!

I respect Gene for printing these things. Gene’s always asking you very personal questions you don’t want to answer. Gene is always very nice to me but I told him straight up…I guess I was still angry at the back of my head when I agreed to do this interview…so I just said to him point blank that I used to hate him. He said: “Why? Tell me everything; I want to know all the details…”. That was very cool and made me have more respect for him. He really wanted to hear my point of view; my feelings about what went on then…

How did you decide to become a model and how did you get to be a Playboy cover girl?

Since I was a little girl, I wanted to become a model…when I got to L.A. I got into acting…I studied acting and actually that was my priority at the time. In L.A., I met a lot of Playboy girls…playmates., like Jenny McCarthy, Pamela Anderson, Carmen Electra…of course, Shannon Tweed who was a big influence. So, I just decided to give it a try while I was still young to do it. You know, I am proud of my accomplishment in that field. I am still acting and modeling but the truth is that I don’t have the same drive or passion for it…to become more successful and stuff. I don’t care about it as much as I used to but I had a great time doing that in the past!

You were also part of “Rock Star”, a film that centered around the life of an unknown singer that becomes famous…another music-oriented chapter in your life…

Oh yes! You know, it ended up being quite different that I thought it would be. I believed at the time that my big break would come by starring at the movie, even though I had only a small part on the film; the fact was that it was a big budget movie with big stars on it. I thought that it would be my life-changing movie…it would change my career. It definitely changed my life –although, not my career (laughs)- as I ended up having a relationship with the film’s director and then a child with him. I am sure that you have read all about my audition with Eric’s leather jacket from the “Hot In The Shade Tour”…there were only four out there and Eric gave that one to me. Those jackets were made for the band but Eric always thought that it looked better on me. So, I wore the jacket to the audition and it turned out that the guys were looking for people who had actually lived that era one way or another. They wanted to hear about my experiences of being the girlfriend of a rock musician. Let me tell you a funny story about Zakk Wylde…I was at an airport…it was 1989 or 1990…back in the day, anyone could walk anyone at the gate as the regulations were not so strict. So, I met Zakk Wylde and we were at the same flight…he was flying to see his then wife Barbara and I was flying to see my then boyfriend Eric. Zakk was on the first class but he came back, sat next to me and we got completely bombed! We have been drinking during the whole flight…I want to make clear that he wasn’t make a pass on me or anything…we were just talking. The next thing I remember is that he was giving me a shoulder massage and after a while I passed out. Next thing I know is that I woke up and I was the only one on the plane. I got off and I saw Eric waiting for me…when he saw me his first words were: “Guess what? You were at the same flight as Zakk Wylde. He just walked out of the gate”! I said: “Oh, really?” (laughs)

No, you’re right…he wouldn’t be too thrilled about it (laughs)! So, when I saw Zakk after all these years for the Rock Star film, I go over where he was sitting and I said to him” Hey, remember me from that flight?” That was very funny…Zakk is a great guy!

Do you know that Gus G, his new guitar player, is actually Greek?

He is…? I didn’t know that! I just saw Ozzy live on stage and this guy (Gus G) is a fantastic performer.

Now that we talk about all these things, would you say that music in general and the music industry in particular played a significant role in the shaping of the things to come in your life?

Absolutely! From the time I was growing up in Massachusetts…I remember being the only one there reading Metal Edge. When I saw Van Halen in concert…that was it! I was completely hooked and I was never the same since then. I kept listening to music 15-16 hours a day…I was a huge fan of rock music and it made me happy. I went straight from high school on the road with KISS…think about it! It became a huge part of my world and after Eric’s death, I couldn’t go to a rock concert…it was too much for me because it reminded me constantly of Eric! I couldn’t even go to a restaurant and see a jazz band perform. I was so traumatized that I couldn’t even see a set of drums. It took me many years to be able to be around that rock scene again. It’s only…I’d say…4 or 5 years that I went back to that kind of thing; going to concerts and enjoying the show. It was a full circle for me…I first listened to Van Halen, became an actor; a model; a mom…and now I am stuck to Van Halen again (laughs)! I just saw them live and they were absolutely on fire! I felt like a teenager again. Music is in my blood…it’s what makes me happy! Also, I like the mentality of rock people…I just feel better with them. They are just like me.

You have traveled all around the world. Have you ever been to Greece?

Rockpages.gr: My last question: if you were about to write your autobiography, which title would you give to it?

Oh, my God…that’s a difficult one…let’s see…maybe “Carried Away”…because Carrie is my name and I got carried away far from my original goal in life and I never regretted it!

All Photos Taken By The Official Website of Carrie Stevens (www.carriestevens.net)