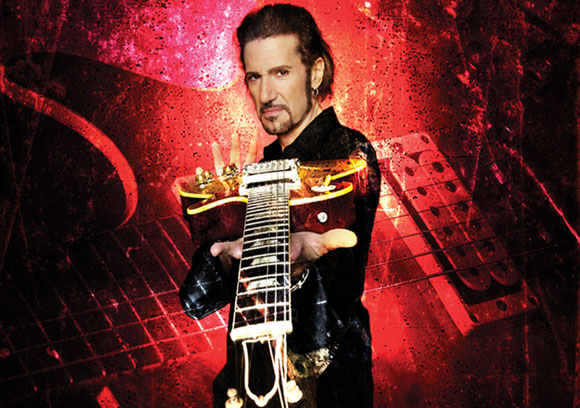 May the Rock be with you – Bruce Kulick

“Bruce Kulick is coming back to Australia armed with his first new solo album in five years – BK3 – and a brand new live show that promises to delve into the depths of material from his twelve year tenure with KISS and his work in the last thirteen years as a solo artist. BK3 is Kulick’s third solo release, hence the title.

Australian fans will be among the first to hear the album, which will be released ahead of its worldwide debut at the concerts. BK3 features the soaring guitars and signature riffs that Kulick is known for, along with an array of special guests that include former Kiss band mates Gene Simmons and Eric Singer, Knack lead vocalist Doug Fielder, and Nick Simmons (Gene’s son and rising star in his own right) making his vocal recording debut.

Bruce promises the shows will be worth the wait and will feature a plethora of Kiss tunes from the eight albums he recorded with the band between 1984 and 1996. Hits like “God Gave Rock and Roll To You II,” “Crazy Crazy Nights,” “Forever,” and “Tears Are Falling” will be nestled alongside many rarities never performed live by Kiss themselves.

Since departing Kiss in 1996, Bruce has remained active in the music industry, forming the band UNION with former Motley Crue vocalist John Corabi, acting as a camp counsellor at various Rock and Roll Fantasy Camp events, working with both Paul Stanley and Gene Simmons on their solo projects, recording commentaries for the multi platinum retrospective Kissology DVDs, and, since 2001, playing with the legendary “American Band” Grand Funk Railroad as their lead guitarist. In between all of these activities, he recorded two solo albums. BK3 marks yet another milestone for the veteran guitarist, and he is very much looking forward to beginning the journey here in his “second home” of Australia.

You have been out to Australia a number of times now over the years, you must really love it down here and obviously the fans must respond to you being here, what is it that keep bring you back?

Well you know there were a few years I didn’t make it down and was pretty disappointed about it and was really flattered when I got on the short list of one of the music chains which was what happened in April. Allan’s music was looking for some international players to come down and perform and I was like, this would be a great opportunity because I wasn’t really ready yet with everything with my record so I figured, well let me come down here and that was April. Now I made the plans for December, so for me to come through twice in one year is remarkable actually. But I do like the people, I always feel at home in Australia. I remembered any of the times, it was the big KISS show which was the first actual KISS convention that was done in Australia it was just amazing getting up close with all the fans besides just being in the arenas. I just feel there’s a real affection for my era of KISS as well in Australia which is probably another reason that keeps bringing me back.

and considering Australia is where the KISS army was born!

Your new album BK3 is due out very soon and for those of us here in Australia we will be able to pick it up from the shows. How would you describe the range of songs on the new album?

Ha ha I’m working on it! Its really stressful because I’m trying to do a worldwide release you know and what’s interesting about this record,…with the first two solo records I actually only wanted to sell them myself and not have any real distribution you know and this record I really want it to be distributed because I have such amazing guest performers on there and I’m trying to work with it. I’m almost going backwards, instead of doing it myself, I want the help of a label and I guess you can imagine that the record industry is not any easier these days. But the record is finished and all the artworks done, you can visit a lot of the photos on my website and everything, but I’m just trying to figure out the positioning for the whole worldwide release right now, it’s a little stressful right now but this is the record that’s worth being careful with. Not only do I feel responsible for Gene to be on there and his son Nick who did such great performances, but that’s real important to me that it’s the best of me and I have some great players on there and I just want to get the best exposure I can.

From a song writing point of view, does BK3 feature songs you have written just recently, or are they from the archives over a number of years?

You know, one of the songs called ‘I’ll Survive’ which had to do with me getting shot back in 2003 on Sunset Blvd which made CNN and everything. Fortunately, of course nothing really horrible happened but still it inspired me writing this song, I probably wrote that in November / December of 2003, you see what I mean. So the song writing process started as far back as then, there are a couple of things that are a little bit more recent, like the first song ‘Fate’ it was actually finished early summer when I recorded a couple of tracks for the record, but it did really span over the course of a number of years from 2003 to now. It’s pretty remarkable but it all makes sense in the big picture.

And the instrumental stuff, do you ever go in and just play and whatever you play is what you record or do you have something in mind?

There is one instrumental on my record, the other two had at least 3 or 4 on each one of the first two solo records. It was kind of unusual, (Jeremy Rubolino is the guy that produced the record for me) when we discussed the recipe of the record shall I say, at one point it came up that there was no instrumental on the record and I did think that was a little odd and I was like, wow, we never even thought about it. I remember at one point we tried writing something that could be an instrumental and I kind of just thought it was a little dark and weird and after that discussion, that weekend I remember just sitting down and jamming on something and turning it into the instrumental. When it comes to the melodies on the instrumental, that is almost something that is slightly planned out and slightly improvised. By the time we got Lukather there to jam along, I left out a lot of what wasn’t completely formulated, I wanted to see, well alright what would you play over these verses, lets jam! It was its own animal in the way it was created and I’m real proud of that track because its really unique in the way that we trade off and its not always obvious, its obvious to me when he’s playing and I’m not playing, but I think a lot of the fans just get off on the energy of it, the ones that have heard the song.