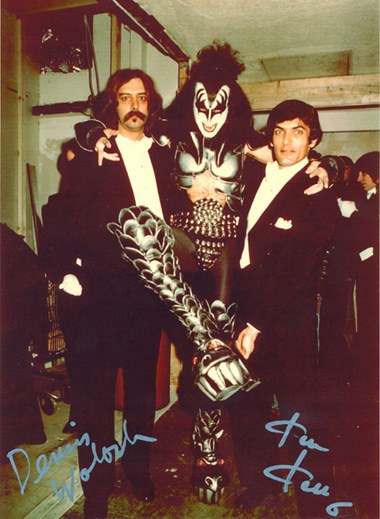 KissFAQ: Dennis, the Beatles have ”The White Album”; Metallica have ”The Black Album”; and with KISS’ ”Music From The Elder” we have the brown album.

Dennis Woloch: Is that what we’re calling it? (laughs)

KF: (laughs) So, it’s 1981 and KISS are finishing up ”Music From The Elder.” As art director, when did you first become aware of this particular project?

DW: I don’t remember. They were there all the time in the office. When they weren’t touring they were basically in our office. [Bill] Aucoin shared space with my boss, Howard Marks. We were the advertising agency. Of course, I was doing their albums at that point, and all their advertising, and all of their marketing — everything you can name, we did it for them. In ’81 Aucoin was still sharing space with us.

DW: It was 655 Madison, yep. That’s been taken over now by Donna Karan or somebody, DKNY. The front entrance that used to be on Madison is now closed off and it’s a store front. And you have to enter that address on 60th Street now, but it’s a smaller entrance. The building looks different now. I don’t know what happened to our floor.

I think Aucoin was still with us at that point. So the band was always up there, walking around. So when new projects came along, I heard about them right away. The would say, ”Dennis, we’re going to be doing this and start thinking about it.” Exactly when I heard about it, I don’t know. But I was in on the stuff right away.

KF: When did you learn that this particular album was a ”concept” album? Did the band or Bill pull you aside and give you the lowdown?

DW: Yeah, it was explained to me, probably by Bill, that it was not going to be the usual KISS album. You know, it had all these stories and mysteries, and sorcerers and wizards and it was that sort of deal. And I said, ”Fine.” Other bands had done that too. I figured it was time for KISS and sure enough they were doing it.

KF: Once you learned about the album’s details, what was the process for developing the creative direction for ”The Elder” album art?

DW: Well, I got as much information of what the album was about as I could stand. A lot of it seemed to me to be (pauses)… you know, it was ground that was gone over before by others. I mean to me, it would be like somebody coming out and saying, ”I’m thinking of writing a book series or a movie about a little boy and a sorcerer that becomes his mentor.” And I say, ”Well, wait a minute. Didn’t we just see that some place?” That’s kind of how ”The Elder” felt to me, even though it was ’81. They weren’t breaking any new ground. Maybe in their minds this was all very… if you want to make something sound important, you shroud it in mystery, even though it isn’t important. That’s kind of how ”The Elder” felt to me.

KF: I know some fans would agree with you. But there is a group of fans who absolutely love the album.

DW: Yeah, I mean, this is before I heard a note of music or anything else. When the concept was being explained to me, I’m thinking, it’s like your eyes roll back in your head and you say, ”Oh crap.” Not because KISS is not doing KISS music, I couldn’t care less. Let them stretch their creative wings but could you be a little bit more… unique. It just sounded like old stuff to me when I first heard about it. I got into it after a while.

KF: So how did you actually start in terms of a concept?

DW: I guess I looked at some of the titles. I didn’t hear any of the music. I had no idea… they just kind of tried to explain [it]. You know that paragraph… ”In the beginning, The Elder…”

KF: The text in the gatefold.

DW: Yes, that thing. I may have had some of that verbiage. I’m not sure. But I guess I had some rough outline of what it was about and the feeling I was supposed to be evoking, a little bit of the story: the young boy, he goes to where ”The Elder” resides and all of that stuff.

Early on, I got the image of a little boy in front of a big dungeon-type door, or a castle door. And I looked through some of my illustrators annuals, samples of illustrators work and photographers work and stuff like that — just trying to get something going in my mind. I saw a picture of a little boy, about the right age — 10, 11,12 — and he had his back to the viewer but he turned around like if you said (whispers), ”Hey, kid.” And he turned around looking over his shoulder, like a little cautiously. I don’t even know what the background was, I don’t know where the kid was standing or what situation he was in or anything. But the kid was the perfect age. He was a perfect-looking little boy. I loved the expression that the illustrator had on his face. So I said, ”I’m going to use this image. I’m just going to rip it off for the layout.” Not that we would use it for the final or anything, you can’t do that. [It was] just for my layout, you know it saved me four hours of sitting there trying to draw a little boy when I could just do this. So I did that, I cut him out and I guess I got a dungeon door someplace and I put him in front of this scary wooden door, like he was just standing there just about to go in. But then he turned around, it’s like he was thinking, ”Should I be doing this? I’m in a dangerous situation. This is spooky.” It looked great, it had a nice mood. And I showed that to the guys. I think that was the only layout I did and I don’t remember what they said really and I don’t want to invent things. Apparently they shot that down. I guess they just said, ”Maybe just a hand and a knocker,” somebody must have suggested that to me.

KF: Who would have suggested that, Gene, Paul and/or Bill?

DW: Gene and Paul were the guys who mostly had input on that stuff. And of course at that time, the other two guys were kind of on the outs anyway, weren’t they?

KF: Eric Carr was new at that point. And Ace was nearing the end of his first tenure in the band.

DW: Eric didn’t have any… he had no power. He was just a hired drummer really.