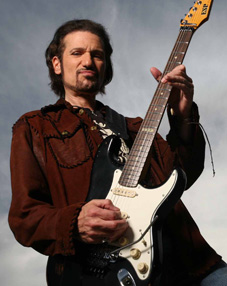 Bruce Kulick is the ultimate journeyman guitarist. Over a glorious career, this legendary shredder has held the line for rock ‘n’ roll with some of the greatest outfits in its history. Most associate his name with KISS but things really got rolling for Kulick with his brother Bob on the Bat Out of Hell tour of ’77-’78. In fact, if you have the re-release, there are two live tracks with the Kulick brothers figuring prominently.

On the, “…two live tracks from 1978, … feature Bob and I very clearly. I’m on the left. He’s on the right, in your stereo imaging,” Kulick said while on the phone with us about his first days in the business.

“It’s ironic you bring it up because yesterday at the gym I decided to listen to Bat Out of Hell. As Kulick worked out he was, “…just trying to put [himself] in that mind frame. I could just see my hands on the fingerboard even though I haven’t played [the intro] song in ages. We [did] this intro Bolero piece that the show would always start with, and then we would go into a very bombastic version of Bat Out of Hell.”

The experience of the tour ran the gambit from ‘totally misunderstood’ to ‘best new thing’.

“The truth was, that tour, I was really glad to get it done. It was quite stressful for me at times because it was a lot to learn, to take in, but it didn’t happen overnight. We worked very hard, that band. We were getting booed off the stage in the beginning and all of a sudden the tide turned when radio was supporting it.”

Bat Out of Hell took Kulick to many places including the El Mocambo in Toronto, but again with the help of radio support, they returned to explode much larger venues.

He told us, “I remember the first time we went up to Canada. We played the El Mocambo out in Toronto. It was one major radio [event] that went out to millions of people and all of a sudden Meatloaf was a hit in Canada. We went back and did arenas, and then we went back and did that big gig with ELO.”

Besides taking Canada by storm Kulick rocked the Meatloaf spectacular around the world and even had the incredible opportunity to be a part of television history on March 25th, 1978.

“One thing I’ll never forget, not like I was featured much, but I was there and it was amazing, was playing Saturday Night Live. How many people get to perform on that? That’s the classic years with John Belushi and everybody.”

The first major project this six-string master completed and he’d already cut his teeth with the best of them, and survived all the trapping s that go along with it.

“Any major tour where you’re a big artist, and you’re in arenas and the whole thing. Everything you want is there, if you want it. Granted, Meatloaf wasn’t Jon Bon Jovi, but of course there were women around,” Kulick chuckled.

With the Bat Out of Hell tour brought to a close, the amazing adventure with one of rock’s great icons Meatloaf, led to another reality – more work needed.

From here Kulick felt he wanted to get back into something that was more, “regular rock.” Of course Meatloaf had the right elements but the stage show was more akin to theatre. Kulick was looking for something a little more solid. Believe it or not, the next great musical icon to enlist Kulick’s six-string services was none other than Michael Bolton, although he was known as Bolotin at that time. His brother Bob got them in touch and Kulick was impressed with the demo Bolton put together with Jonny Winters on guitar. At that time Bruce told us ‘Bolotin’, “…was just this popular, blue-eyed, soul kind of rock and roll singer from New Haven, Connecticut.”

The demo garnered some interest but the industry wasn’t looking for solo singers with added musicians, they wanted a band to promote, a situation similar to the conditions that led to Bad Company. So, Kulick, “…stayed in it and ended up putting a band together with Michael Bolton. We finally came up with a name, Black Jack and we did two records with Polydor, which was before it became Polygram. The first record sold over 100,000 copies and we were thrilled. [The record company] wanted it to be gold and they didn’t hang in there that long.”

The experience and magic of being a part of all of these fantastic acts prepared Kulick for what any rock musician’s dream — KISS.

This is still how Kulick gets the most recognition but he has an amazing attitude when faced with KISS questions in interviews. Laughing when asked if the constant referrals to KISS were tiresome, he laughed, “I have a comment that I say, ‘It’s a KISS world and we just live in it,’ because they’re everywhere. It’s something I’m really proud of. What’s ironic about it is I don’t have to be in the band to wave the flag.”

Kulick joined the band right after Lick It Up, starting out on the road with the rock legends for their Animalize tour, replacing Mark St. John after he was unfortunately diagnosed with Reiter’s Syndrome. And, as Bruce related to us, “If you think about it, I’m the best guy to represent the non-make-up era,” as well as being the longest consecutive serving member next to founders Gene Simmons and Paul Stanley.

But what was it like joining a massive rock and roll juggernaut with a specific history and proven marketing formula? Well as Kulick points out, KISS was attempting to re-invent itself and remain a band that led in the music industry, rather than just sail on its past accomplishments. Kulick felt his, “… era of KISS was always trying to find itself and always evolving,” and was happy that he got, “…to express and create what [he] was asked to be involved with.”

“You’ve got to remember that the band [was] Gene and Paul’s baby and I was a good strong team player. You have some frustrations but you know the ground rules so why get crazy about it.”

Kulick, as a working guitarist, knew that being a hired gun is first about getting the job done and he already had a great amount of experience to bring to such a mammoth act like KISS.

“I’ve walked into a lot of situations where I’m the replacement guy. In some ways they’re always similar. There’s a past you need to embrace and sustain and yet put your own spin on, “ says Kulick.

While not a part of the Reunion tour, or the subsequent work that KISS has been involved with since, Kulick has mixed feelings.

“I’m kind of relieved I’m not the Spaceman but I miss being in KISS. I think Tommy was a great choice, especially since they’re concentrating so much on an Ace clone not…progressing.”

Never one to dwell, or worry about what-might-have-been, Kulick got involved in a number of products and has even put out three solo albums. The latest, BK3, released in 2010, is just another testament to the staying power, and drive, of this workhorse guitarist.

BK3 happened very organically, and as the writing process went on it became apparent that many of the songs he wrote were begging for a variety of singers. Kulick also decided to treat this album as if it were coming from a big label, even though he is well aware of the massive changes in the music industry, especially in regards to promotion and marketing.

“It’s just hard if you’re going to do it yourself to do the proper promotion, get a team to market it and get it in stores. This album I treated differently from top to bottom. I had a lot more guests, some of them quite famous who contributed their time and talent.”

“I didn’t compromise in any way with my record…whatever it cost to be as great a project as if a major label was spending a lot of money on it, from the artwork, to the studio, to the production.”

This was a change from the approach he took with his first solo foray released in 2001.

“I would always make a joke and say I was going to sell it out of the trunk of my car. Back in 2000 offering it only online, and through a few of the KISS merchandise sites, is selling it out of the trunk of your car. Now of course so many people work online to buy even detergent,” so Kulick has increased his success.

The KISS connection is still alive as Kulick features both father Gene and son Nick Simmons on different tracks. Not only is the Simmons name an invaluable marketing tool, the music always comes first.

“Some people think what Gene did on BK3 was as good as anything in the past 10 years with KISS; kind of a throw-back to those Revenge, Carnival, [days]. This is a little heavier.”

Kulick also enlisted the help of fantastic frontman, Doug Feiger, best known for fronting rock/pop superstars The Knack. Unfortunately, Feiger passed away after a lengthy battle with brain cancer but at least he got to hear the finished product and was quite happy with it.

“At the memorial for him at his home, his brother, the famous lawyer who worked for Jack Kevorkian, Jeffery Feider was there and we discussed [the song] and he said he had heard the song and loved it. I know Doug loved it so that meant a lot to me. Then to see Ringo Starr at his house to pay tribute, Jeff Lynn, Joe Walsh, that blew my mind. I didn’t realize he had friends like that.”

Not content to just have a place in rock history and ride out his days of glory on a beach, Kulick has been helping Grand Funk continue to spread its music worldwide, joining in 2001.

Interestingly enough, the Grand Funk connection came much earlier in his career when he was touring with the Bolton project, Black Jack. The band played a few shows with Bob Seger in 1983 and that’s where he met Grand Funk’s drummer. Fast forward a couple of decades and Kulick’s name was first on the list as a piece in the puzzle of Grand Funk’s continuation.

Unfortunately, touring with the Funk has limited his ability to get out on the road to promote BK3 but like the true workman he is, Kulick is staying true to his commitments and his album is still getting the love it needs for the time being.

“My record is [not] about promoting single 3, 4, 5 and 6. It’s not about that. The great thing about it is it’s still selling. It still has legs. The sad thing is I haven’t been really been able to go out there and tour for support because of my Grand Funk commitment.”

The KISS factor is still an agent of good for Kulick, as well.

“KISS is always active and people are always asking, “Oh what’s Bruce up to? I always get fan emails [too] ‘You’re my favourite KISS guitarist, what’s going on?’ Have you heard BK3? ‘No, I’ll check it out.’

Kulick also keeps in contact with fans by participating in fantasy camps and KISS conventions where he is able to connect to the next generation of music fan looking to discover rock and roll.

“I have new fans, young ones, some of them are not as many years as I have been out of the band. Talking to a 12 year-old, or 10 year-old, and seeing the stars in their eyes. They get so excited to meet me. It is quite fascinating, actually.”

No doubt it will take several generations for people to really appreciate the immense body of work that Bruce Kulick played on and inspired.