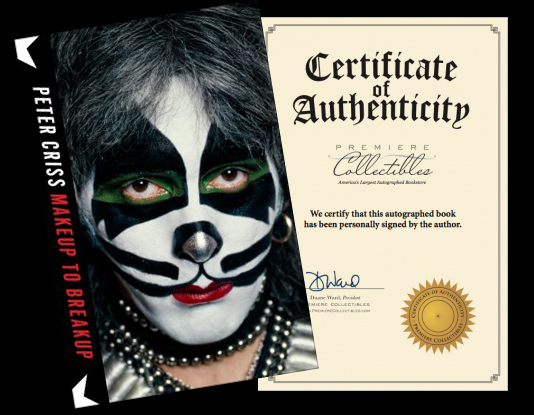 Makeup to Breakup: My Life In and Out of Kiss

This Numbered First Edition copy of Makeup to Breakup has been personally Autographed by Peter Criss. And Exclusively Made Available at PremiereCollectibles.com.

Founding KISS drummer Peter “Catman” Criss delivers a riveting and candid account of his incredible life in music, from the streets of Brooklyn to the social clubs of New York City to the ultimate heights of rock ‘n roll success and excess.

KISS formed in 1973 and soon emerged as one of the most iconic hard rock acts in music history, legendary for their elaborate makeup and live theatrics. Peter Criss, the Catman, was the heartbeat of the band. From his elevated perch on his sparks-emitting drum riser, he had a unique vantage point on the greatest rock show of all time, with the KISS Army looking back at him night after night. Peter Criscuola had come a long way from the homemade drum set he pounded on nonstop as a kid growing up in Brooklyn in the ‘50s. He endured lean years, street violence, and the rollercoaster of the ‘60s music scene, but he always knew he’d make it. Now, he shares that phenomenal story.

Makeup to Breakup is Peter Criss’s eye-opening journey from the pledge to his Ma that he’d one day play Madison Square Garden to doing just that. He conquered the rock world—composing and singing his band’s all-time biggest hit, “Beth” (1976)—but he also faced the perils of excess and his own mortality, including drug abuse, near-suicides, two broken marriages, and a hard-won battle with cancer. Criss opens up with an unprecedented level of honesty and emotion, previously unseen in any musician’s memoir. He also provides KISS fans with the definitive account of a band that began as four brothers in-arms committed to the same goal, their dissolution, and the legacy that lives on. Sex, drugs, and rock ‘n roll have been chronicled many times—but never quite like this. “You wanted the best—you got the best.”

Peter Criss co-founded KISS in 1973 along with Gene Simmons, Paul Stanley, and Ace Frehley. He left the band in 1979, embarking on a solo career. In 1995, he reunited with KISS, resulting in a phenomenally successful world tour before he left the band again in 2004. Criss appeared in the HBO series Oz in 2002, and he continues to write and record music. His most recent solo album, 2007’s One for All, reached #36 on the Billboard Top Independent Album list.