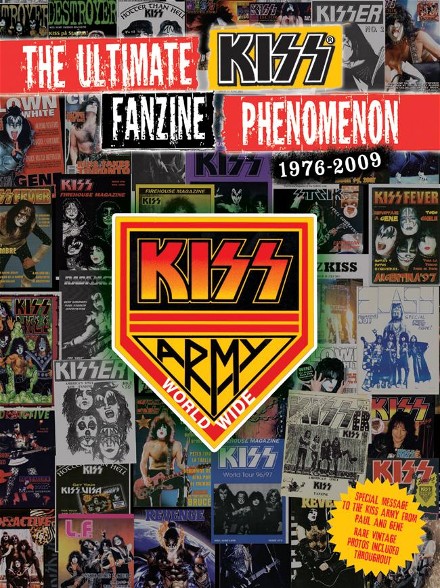 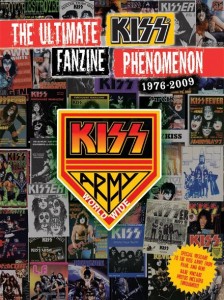 ”In celebration of the arrival of the band’s first studio album in eleven years, KISS has pushed up the release of their book ”Kiss Army Worldwide: The Ultimate Fanzine Phenomenon” to coincide with the group’s North American tour.

For the first time in KISS history, KISS fans everywhere will get an inside look and visual history told through concert photos and unique fanzines chronicling the iconic band from their beginnings in the 1970s until today. ”Kiss Army Worldwide: The Ultimate Fanzine Phenomenon” includes never-before-released photos, rare fanzine covers, unique and engaging content, and other shared memorabilia from both the fans and the band. This is the ultimate must-have for every KISS fan!

The book features commentary by legendary front men Gene Simmons and Paul Stanley, who provide invaluable insight on topics such as the rock and roll DIY aspect of fanzines, how these fanzines greatly contributed to the band’s evolution into one of the most epic and legendary bands in music history, as well as the band’s appreciation of their adoring fans. In addition, it showcases interviews with members of the KISS Army from all over the world.

With KISS fans giddy with anticipation for the band’s first album in over a decade and their North American tour this fall, this book will become an essential item for millions of KISS fans everywhere. Finally, here is THE ultimate book for KISS fanatics!

KISS is regarded as one of the most influential rock and roll bands of all time. Their career milestones are staggering. KISS holds honors as one of America’s top gold record champions, recording 37 albums over 36 years and selling over 100 million albums worldwide.

Over 30 years of record-breaking tours around the globe include high-profile appearances at Super Bowl XXXIII, the 2002 Winter Olympics in Salt Lake City, the 2005 Rockin’ The Corps concert dedicated to our troops in Iraq and Afghanistan, and most recently, the 2009 ”American Idol” finale before 30 million viewers. In September 2009, KISS received their first nomination for induction into the Rock and Roll Hall of Fame.

The KISS legacy continues to grow, generation after generation, transcending age, race, and creed. The unparalleled devotion and loyalty of the KISS Army to the ”Hottest Band in the World” is a striking testament to the band’s unbreakable bond with its fans.”