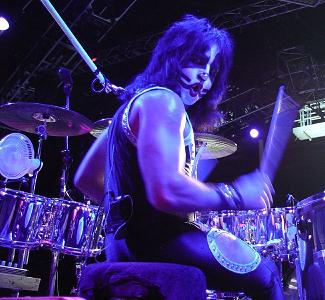 KF: That segues us into ”Unplugged.”

ES: To me, it was kind of bittersweet at the end of it. Once we got to do ”MTV Unplugged,” I knew it was cool. We played with the original guys. It was cool getting to play double drums onstage with the original band and to be part of that.

But it was also kind of awkward because I knew all the rumors were flying around. And look, it was very obvious that Peter and Ace and their managers were definitely jockeying position to try to get Gene and Paul to do a reunion tour. Look, it wasn’t just Gene and Paul trying to MacGyver the whole thing. Absolutely not. That was something that was going on from Ace and Peter’s camp. There’s no doubt about it.

I have to say in looking back that I didn’t think that they would do a reunion tour. I thought it couldn’t happen. You have to remember we rehearsed for a week in New York before we taped the show and just from what I saw from the interaction and from other facets, I just didn’t think it would happen. And when it did, I was kind of surprised. Was I surprised at the success of it? Yes and no. I didn’t know that it would be that big. Honestly, they didn’t know it was going to be that big. I don’t think they had any idea that that thing would blow up and be so huge that year.

You know, I don’t blame Gene and Paul for doing it. I know I would have done the same thing. But personally at the time, I didn’t think it would happen and I didn’t think it could happen. But you know, everybody rose to the occasion and stepped up the plate. And they made it work and it was a huge success.

KF: You kind of went into my next question, which was about ”MTV Unplugged” being a big factor in leading to the reunion. So you did have a sense that was the destiny for KISS at the time?

ES: Bruce told me that he always thought that at some point they would probably come back and do a reunion. He thought it was probably inevitable. But you have to remember at the point I had only been around for maybe four years and Bruce had been around for 11 years. He’d been around a lot longer. He really knew more about the inner workings of how Gene and Paul worked and what went on with KISS.

But at the end of the day, it’s all a business. And it’s about survival. Some people don’t like when musicians start talking about music and business because to them it’s very emotional. They don’t like when it’s talked about as an item, or a product. But at the end of the day, that’s what you are, you are in business and you create a product. Your product is your music. That’s what you’re promoting, that’s what you’re selling. And that’s how you make a living. If somebody is not selling TVs in the style that they make then they have to find a way to make a different style that consumers will buy or they go out of business.