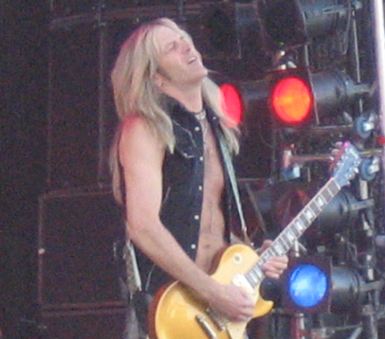 In 1982, the 18-year-old had just moved to L.A. and the famous band just happened to be holding auditions to replace original axeman Ace Frehley, whose relationship with fellow bandmembers had peeled and cracked noticeably for some time.

”Half of the intimidation thing for Kiss was that nobody had seen their faces at that time,” Aldrich said.

In those days, it was a treat to catch a peek of a portion of Gene Simmons’s mostly shielded unpainted face when photographers would snap the band’s bassist arm-in-arm with one of his steadies at the time, such as Cher or Diana Ross.

”I didn’t know what these guys looked like, and here I was going down to the recording studio to meet them,” Aldrich said.

”There was that whole thing going on in my head. ’Wow, this is just bizarre.’ ”

Aldrich, ”more of a Zeppelin guy,” came well prepared nonetheless, able to unleash a very healthy solo for Calling Dr. Love and any number of other Kiss standards.

”Gene is sitting there with no makeup on telling me, ’Try a solo on this song, or whatever.’ ”

Aldrich tried, but it was Vinnie Vincent who got the gig.

There were no hard feeling, and Aldrich and Simmons remain buddies to this day.

”I was too young, too immature for a gig like that at the time,” he added.

”What it did was really wake me up to, ’OK, I have potential. Obviously I have something going on or those guys wouldn’t have noticed.’

”It got me serious about being better as a musician. It has never been about, for me, getting girls or trying to be famous. It’s about trying to be a good musician. I’m still trying.”

Does Aldrich, 47, ever wonder what his place in the rock universe would have been had Kiss lapped him up so many years ago?

”That would have been OK, because Ace (Frehley) is awesome.