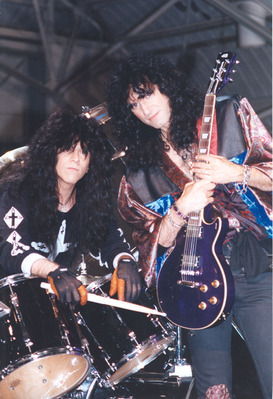 Twenty years after his sad and tragic passing, Eric Carr’s family have put together a commemorative CD called Unfinished Business. The album features unreleased tracks that Eric had worked up for KISS and tracks that were newly completed using Eric performances from his days in the band. Members of TWISTED SISTER, SEETHER along with Ted Poley (DANGER DANGER) and Bruce Kulick (former KISS guitarist; GRAND FUNK RAILROAD) lent a helping help to the Carr family to make the CD come alive. Kulick sat down with Bravewords.com to remember his friend.

How did you get involved with the Eric Carr Unfinished Business album and why did you want to be involved?

“I have to be honest with everyone. I wasn’t aware that there was much more of anything music wise regarding Eric available anywhere, but Loretta (Eric Carr’s sister) kept digging for things. When I did Rockology, I thought that was pretty much it and I wasn’t too clear about what to do with the song Dial L For Love (which is why it didn’t get used). Through the years she found things and she created some new things too. She took some of the tracks and had people sing over them. I had no problem with that and I actually enjoy the results. Even though, I’m talking about the record, I should be clear with everyone – I didn’t have my hand in putting it together. It was actually a pleasant surprise to me and, of course, I love talking about Eric because I felt very close to him and I want his memory to be celebrated as much as possible.”

The biggest surprise for me is that they took his vocal from his KISS audition tape and created a ‘new version’ of Shandi. Was that a big surprise for you as well?

“Absolutely and the result is very cool. They had a young girl (Marcia Juell) sing on it with him. The whole thing was really interesting – especially how creative and aggressive Loretta was to make some new things that people can enjoy. I’m very happy that she spent the time.”

The song ‘No One’s Messin’ With You’ is the second demo version of the Hot In The Shade classic track, ‘Little Caesar’ to be released. The first demo appears as ‘Ain’t That Peculiar’ on the KISS box set.

“To me, they are all the same song. I was always really proud to be jammin’ on it, but I wasn’t a co-writer on that song. I think it was Adam (Mitchell) and Gene (Simmons) got involved in the later version. It might have been his idea to give it the title ‘Little Caesar’ – like a character since Eric was the Italian of the band. I was always happy to play along with that track. The Hot In The Shade version was actually taken from a demo done in the studio. So, it’s fun to hear it, but as you are aware they are other versions too.”

‘Troubles Inside You’ is a track that Eric did with Mitch Weissman. Mitch, of course, is probably best known for playing the part of PAUL MCCARTNEY in the original cast of BEATLEMANIA. Have you worked with Mitch at any time?

“I knew Mitch from New York and I’ll always be grateful to him because (even though my brother Bob always told Gene and Paul that ‘Bruce would be good in the band’) – it was really Mitch Weissman, who was close enough to Paul to get in his head, that when Mark (St.John) was having either… Paul wasn’t happy with what he was doing in the studio or he was starting to have his health problems – Mitch told him to call ‘Bruce’. Obviously, having it come from someone outside of my brother put a little more weight on it. I don’t really remember Mitch and I (and I know him very well from the New York days) – working on songs for KISS or anything like that. Adam Mitchell would be the one from the past that I have a very close working and personal relationship with.”

You’re doing a couple of Unplugged & United shows with John Corabi later this year (Madrid, Spain on November 25th and Helsinki, Finland on November 26th). Will you be performing any of the Unfinished Business songs as a tribute to Eric?

“We don’t have anything planned yet. The best thing would be if I did an acoustic version of the Union song, ‘Dear Friend’. Since most of these events include a Q&A and since they fall very close to the 20th anniversary of Eric’s passing – I’ll be very happy to talk about Eric. I don’t necessarily have to do a musical tribute.” 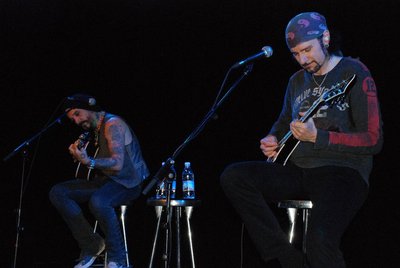 Speaking of John (Corabi) – do you think you’ll ever record a full album together again (and I don’t mean necessarily as UNION)?

“It’s interesting that you mention it. John is completing (or has completed) an acoustic record and I did contribute a couple of songs and solos. As you know, he appeared on both BK3 and Transformer (Bruce Kulick solo records) and there is a certain chemistry that John and I have together that I am very proud of. So, in a way I’m part of it (his new album), but it’s his record and we’ll obviously be doing stuff from that when we perform. I’ve been listening to some of the old Union stuff lately and the more I listen the more I’m really proud of what we created and what I was involved in. Hopefully, it’ll stand the test of time. The stuff sounds great and John (like myself) are unsung heroes of our craft. I’m hoping John’s acoustic album brings him a lot of success.”

You’ve been touring with Grand Funk Railroad, but at some point will there be an extended Bruce Kulick solo tour (where you play some KISS songs)?

“When I travel internationally, that’s what I usually do. Sometimes, like in Australia and South America, I pick up bands – people that I really connect well with to do my solo stuff and KISS. The KISS songs that I do are not your typical Reunion tour type of KISS songs – it makes more sense to feature my era which in many ways has been neglected by the band. So, it makes it more special when I do them. The news with Grand Funk is – it’s been a great band for eleven years now. I’ve been touring with them and we really gel on stage. Everyone gets along and you can tell we’re having a good time. The music is great and they don’t seem to want to tour internationally, so that gives me a lot of opportunity… Let’s be honest being a member of KISS is a big passport to overseas. Plus, Grand Funk was never really big outside of America. There were some countries that really liked them, but it’s their call much like when KISS goes to Japan. Gene and Paul are willing to go and sometimes they get offers for things and they’re like ‘nah, I don’t want to go’. So, it’s really up to Don (Brewer) and Mel (Schacher) as to where they’re going to go. It does look like Don will be touring with BOB SEGER, so that’ll take me a little off ‘the leash’ (shall I say) to look for things to do.”

Unfinished Business has songs that were intended for KISS, but never used. They are three KISS albums (that you played on) that have never been remastered. They are Hot In The Shade, Revenge and Carnival Of Souls. Are there any tracks lying around that haven’t been used and would you like to see those albums remastered or made into deluxe editions?

“The only thing I remember from Revenge which I was hoping they would have put on the box set was the song that Paul wrote with Snake (Dave Sabo – SKID ROW). That was a really cool track. Nobody sang it, but it was a really cool track. Except for that, I don’t think there was anything ‘extra’ from Revenge. That’s the one record I don’t think needs a remastering. I’d love Carnival Of Souls to be remastered to be honest with you and Hot In The Shade could stand for a remastering (that wouldn’t be a bad thing).”

Next year is the 20th anniversary of the classic KISS album, Revenge. What did that album mean to you and to the band?

“I have to say that Revenge was my (real) favorite KISS album. There were highlights all through my career with every KISS album, but Revenge is my favorite. That record was so important for us to kick some ass and do the best job we could. (Bob) Ezrin was very strict about things. We spent the time, the effort and the money to make it great. I’m a very critical person when it comes to excellence in all and when I walked out of the mixing sessions I was 99.9% happy. Just leaving a little bit for error, but I have to say it still stands the test of time. There’s no doubt that it’s a terrific record.”

That was your only time working with Bob Ezrin…

How was it working with him? Is he really a studio dictator?

“He can be, but he’s really more like a ‘mad-professor’ in the studio. His creative approach is very unique as to how he gets you to do what he’s demanding (which is always something great). I have a lot of respect for Bob and as you probably know I’m a big fan of the new ALICE COOPER record (Welcome 2 My Nightmare). It’s no surprise that it was done by Bob Ezrin.”

Did you learn anything from working with Bob?

“From each of the KISS albums that had a producer, of course, I learned. (Ron) Nevison (Crazy Nights album producer) was a different approach, but knowing that Ezrin was the guy that worked on (PINK FLOYD’s) The Wall, Peter Gabriel and other early KISS stuff… I watched him like a hawk and learned quite a bit. It’s part of why I like working with Jeremy Rubolino who did BK3. He’s related to Bob and he was involved in the new Alice record too. He did all the string charts and ‘The Underture’ (song). Jeremy has something about his approach to music that is the way Bob thinks. It’s very hard to describe and you have to experience it, but there is a certain creative process that’s very unique. It really makes you come up with something great and he went about it in an ‘un-obvious’ way.”

Is there a new solo record coming soon?

“I’ve only been talking with Jeremy about what to do next, but I will by the end of the year have a concept of where I’m headed and what it’s going to be about.”

That’s great news. BK3 was really well done and it was part of a winning KISS (related) trifecta when it came out (along with KISS’ Sonic Boom and Ace’s album).

We should, of course, plug Kulick.net.