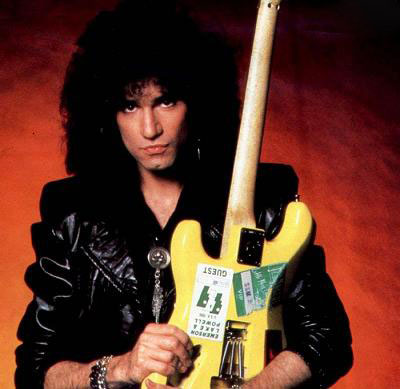 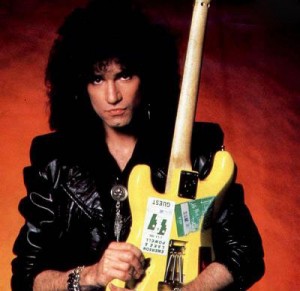 Vinnie Vincent left amid controversy in 1984, with the lead guitar spot then being occupied for a very short time by the late Mark St. John, who, due to health reasons, was subsequently replaced by Brooklyn-native, Bruce Kulick – all within the same year.

Kulick would remain with the group until Simmons and Stanley reunited with Frehley and Criss 12 years later.

”I never thought it would last as long as my 12 years did,” says Bruce today. ”I joined as I helped them on a few songs for the Animalize album and then when Mark St. John got ill, I filled in till of course 1996.”

Had you always been a fan?

”I wasn’t a typical fan – more respectful of their career.”

What are your fondest memories of your time with Kiss?

”For me, playing Madison Square Garden in NYC, big festivals in Europe, and MTV Unplugged were just some of the highlights. I can never forget some of those shows.”

Which were your favourite songs/albums/videos on which you played? Any amusing stories from the road?

”I thought the Revenge album was amazing, and loved some of the other highlights like Tears Are Falling, Forever,Crazy Crazy Nights etc. The road was always fun. I felt like I was in The Beatles when we went to Scandinavia!”

How do you think the unmasked period will be remembered in years to come?

”I do think there are MANY fans of the unmasked era. I meet and hear from them all the time!”

What are your all-time favourite Kiss songs, albums and videos?

As the two ever-present members from Kiss’s inception to the present day, Gene Simmons and Paul Stanley have been the constant driving force behind the band, as well as its undisputed leaders.

What was Bruce’s relationship with them like and was he allowed creative freedom within the group?

”I got along with them,” he replies. ”I knew of course Gene and Paul would play the leader role, but we all worked hard and, for the most part, had a great time gigging and touring. I did have artistic freedom, but I had to earn it.”

What are your recollections of the late Eric Carr (Carr died of heart cancer in 1991 – his place behind the drums being taken by Eric Singer)?

”Eric is missed. He was my closest friend in the band, and what a terrific, funny, talented man.”

In 1996, the four original members of Kiss reunited at the 38th Grammy Awards. They were brought out, dressed in full 1970s get-up, by rapper, 2Pac, to present the award for best pop performance by a duo or group, which, incidentally, went to Hootie & the Blowfish for Let Her Cry.

How did you first hear that Gene and Paul were getting back with Ace and Peter?

”Gene and Paul had a meeting during Carnival of Souls with Eric Singer and I explaining the offers for a reunion tour.”

The highly-lucrative reunion tour lasted until 2001, when Peter Criss, apparently unhappy with his salary, left the band. He returned in 2002 and then left again for good in 2004. His replacement on both occasions was his predeccesor in the early ’90s incarnation of Kiss, Eric Singer, who continues to wear Criss’s ”Catman” make-up on stage.

Ace Frehley quit the group in 2002, believing that their 2000/2001 Farewell Tour would be their last. Although Criss had been replaced by Singer, Bruce Kulick was not called upon to take Ace’s place. That honour went instead to Tommy Thayer, who has been inhabiting Ace’s ”Spaceman” character since 2002.

”I was not surprised,” says Bruce, commenting on why he wasn’t asked back to the fold after Ace had left. ”Tommy was the perfect choice for the ’Spaceman’ position in Kiss.”

There has been a lot of controversy, particularly among members of the Kiss Army, over Thayer and Singer dressing like Frehley and Criss. Does Bruce think it’s right, or should they come up with new designs?

”Yes and no,” he muses. ”Of course the make-up for all the members is iconic now. So to change them and come up with new ones, I don’t think it’s the right answer. They are playing and performing great.”

To this day, despite the success of the unmasked era, Kiss are still best-known for their ”alter-egos” – their alternative personas, reflected in extravagant outfits and face-paint – designed to fully encapsulate the members’ individual personalities.

Simmons was ”The Demon,” Stanley ”The Star Child,” Frehley (and Thayer) ”The Spaceman,” Criss (and Singer) ”The Cat,” Eric Carr ”The Fox” and Vinnie Vincent ”The Ankh Warrior.”

Was Bruce ever asked to come up with his own idea for a character, just in case the group decided to go back to wearing make-up?